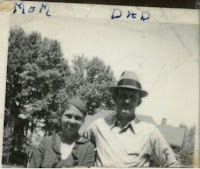 My last post ended with Lena's leaving Ernest for parts unknown, though probably still in Montana. I'd like to back up a little bit and tell a little more about what life was like for Lena being married to Ernest, which might shed some light on why she left. Most of the following stories are family stories, and I'm still looking for historical records to verify the details. But stories I've gathered from various relatives at different times have been consistent, so I feel they are reliable enough to post here.
The family seemed to be doing all right for themselves - the ph

oto at right was taken when Edna (my great-grandma) was a baby, so around 1911. Next to Lena (who's holding Edna) are her mom Amelia and sister Maggie (who must have come up from Nebraska, or else Lena and Edna had gone down to visit). After Ernie and Lena had at least three of their four girls, Ernest moved the family to a little mining town called Southern Cross, Montana, near Georgetown lake. The house they moved into was, compared to their earlier standard of living , pretty rough - the house was a one-room cabin, and had a dirt floor. The scene actually moved Lena to tears. Not too long after moving into the cabin, one of the girls had a birthday coming up. Lena made a big cake to celebrate, and put a towel over it to help it stay fresh for later. When time came to eat the cake, Lena pulled back the towel and found a huge rat, which had eaten a portion of the cake already. Needless to say, she ended up tossing the cake.
Ernest (who also went by Ernie, Creamy, or Red) was apparently quite the ladies' man. Grandma 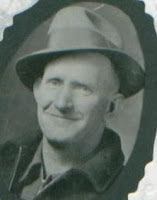 said he was very popular with the girls in town, and that didn't sit well with Lena. She eventually got upset enough (whether because of that, the poverty or something else I'm not sure) that she left Ernie and took at lease Edna and Grace and went to Seaside, Oregon. Ernie went after his children, and probably Lena too, and brought them back to Montana. The family remained poor, and Lena left Ernie for good sometime in the mid-1920s. Ernie had to put all four of his children in the Montana State Orphan's Home, as he couldn't afford to take care of them. A cousin also tells me the state had issues with young children living in a mining camp, so that may have added to the family stress. At any rate, the girls, aged 14 or 15 down to 5, were put in the home, away from both parents, though Ernie at least went and visited the girls several times while they were there.

Lena, as I said before, seemed to bounce from man to man for the rest of her life. Grandma tells me she was ha

ppiest with Ed Layfield, but I don't know when or how long they were together, or if they were ever married. Her last husband was Clarence Roper. He is the only other husband of Lena's of whom I have a picture (shown at right with Lena). Knowing that she left Ernie sometime in the mid 1920s, and that she was single by 1950, that gives her about 25 years to have gone through all those other relationships. During this time, I do know that she stayed in contact with her children, or at least tried to. I have a photo of her and her daughter Edna taken sometime in the 30's I believe, as well as a picture of Lena with a note from Lena to her daughter Hazel written on the back,

asking why Hazel isn't allowed to write to her. I don't know any more of that story, maybe my Grandma or one of her cousins knows more.
The end result of it all was that Lena moved in with her daughter Edna and her family (husband Bill Moore, and two of Edna's children) for a short while in 1950, before moving into a hotel room abo

ve the Metals Bank in Butte. She later moved to another hotel above the Board of Trade Bar, also in Butte, and lived there until just before she died. Her circumstances in this hotel were pretty grim - a bed, no refrigerator, and a hot plate to cook on. She received a welfare check for $35 a month (yes, a month), of which she paid $20 a month for rent. She happened to fall and injured herself, but as she had no insurance she just stayed home in her bed and developed bed sores that caused her a lot of pain. Her daughters Edna (who had moved to California, and had just moved back to Montana) and Elsie put her in the County Hospital in November 1963, and she passed away in the hospital on 22 February 1964.
One of the interesting things I discovered recently that I alluded to in my last post on Lena was her obituary. It was published in the Montana Standard on 23 Feb 1964, the day after her passing. It reads:
Mrs. Lena (Craddock) Roper of 22 1/2 E. Park died Saturday in a local hospital after an

illness of three months.
Mrs. Roper was born Feb. 26, 1887, in Chicago. She attended school there. She resided in Nebraska, then Victor, Mont., as a young woman with her parents in 1909. She came to Butte in 1926 to make her home.
Mrs. Roper was of Mormon faith. Her body is in White's Funeral Home where services will be announced.
Surviving are daughters, Mrs. Elsie Landon of Boulder City, Nev., Mrs. Edward Cote of Twin Bridges and Mrs. William Moore of Butte; 11 grandchildren and 11 great-grandchildren.
This obituary is interesting for a few reasons:
1. I am fairly certain she was born in Illinois (the census records I have show that, and her father was naturalized in Illinois in 1884). Her mother was living in Nebraska in the 1910 census, with her sister Maggie and Maggie's first husband, Arthur Cooper. That might help explain Lena's move to Montana - Nebraska to Montana is a lot shorter jump than Pennsylvania to Montana. If Lena's mom moved the family to Nebraska between 1900 and 1903 (her father Jacob supposedly died in PA in 1900), then Lena could have moved out or run away or something.
2. The comment about Lena living with her parents in 1909 is false - Amelia was a widow by then, and living in Nebraska, while Lena was already married to Clarence Johnson.
3. The statement about her coming to Butte in 1926 is very interesting. If this statement is accurate, then that could be the date she left Ernie. That fits with what I know about her already.
4. The biggest shocker was the statement about her being "of Mormon faith." Being a Mormon myself, and having very few family members in the church (my parents and siblings, one grandparent, and Lena's daughter Elsie), this was news to me! I've done some preliminary searches in LDS church records, and can't find a baptism date for Lena. Elsie joined the church in 1962, less than 18 months before Lena died. I don't know who gave the info for the obituary, but as Elsie was visiting from Nevada at the time, and the obit was printed in a Montana paper, I don't think it would have been her (though she is the first daughter listed). Is there an order in listing surviving children in an obituary - furthest away listed first, closest last? At any rate, I'd like to do some more research into this, see if there's anything in Butte LDS records of Lena's joining the church there.
One thing that leads me to believe she had at least some connection with the LDS church in Butte was the fact that it was the LDS church in Butte that conducted her funeral services (as announced in the Montana Standard on 26 Feb 1964). An LDS bishop gave her obituary, and missionaries spoke and gave the closing prayer. That was another big surprise to me. Maybe Elsie helped arrange things through the local ward while she was up in Butte. But whatever happened, I think it's pretty cool that an ancestor of mine at least had an LDS funeral.
So there you have it, Lena's story. There are still more pieces to unravel and put together, more questions to have answered. But I've learned a lot about her in just the past few weeks that has thrown everything I knew about her on its ear. I can only wonder what future discoveries will do to the composite picture I have of her in my head now. But the overall feeling I get from reading and hearing about her life is just - tragedy. So many husbands, so much hardship, and at the end just living alone in a hotel, eating her meals in the bar downstairs. She loved her girls though, that much I have learned. And her daughters loved her, even though they suffered with her (and at times because of her).
Posted by ironhide781 at 1:00 AM

Wonderful, nuanced portrait of your Lena. Some lives seem so difficult, but you've done a superb job of documenting her life with honesty and respect. Great post.

Thanks! It wasn't easy to put all the stories and pieces together, and I'm sure there's much more to find. But just being able to put this much of her life together was very rewarding.

I remember meeting Grandma Lena once at Grandma Edna's in California. I was only about 4 or 5 but I remember she had white hair and wore a black dress and her kisses were wet. I don't think she had very many teeth if any. What sadness in her life. We are so blessed in our family to be so close and able to care for each other that a situation like Grandma Lena's would never happen these days. Right, son?!?!?

No, of course not. Never.