Today I had the opportunity, with my wife's help, to show my kids how to use the FamilySearch app. They're both really into using wireless devices, so the chance to play on an iPad was too good for them to pass up. :) Plus my daughter has done some family history with me in the past, so she was excited to do a little more.

I had them going through the tasks for any Gibsons they could find, when my son found something interesting - apparently my second-great-granduncle, George Gibson, and his wife Catherine (McDonald) Gibson had had a second daughter I didn't know about! Her name was Anna Gibson, born on 7 February 1902, in Fredericton, New Brunswick, Canada. I did some extra searching, and her birth record is the only thing I can find for her - she missed the 1901 census by a few months, and she wasn't in the 1911 census with her widowed mother and older two siblings. My guess is she probably passed away before 1911, though I don't know that for sure. She just disappears.

While entering Anna into my database, I realized I didn't have much info on her older sister Catherine. I knew she was listed as Kathleen in 1911, but I had nothing on her after that. That was odd, because I had death info for George and Catherine (McDonald) Gibson, as well as their son George Henry Gibson. George Sr. died of pneumonia just a few months after Anna's birth. George Jr. died of tuberculosis in 1918 at the age of 23. Catherine (McDonald) Gibson died in 1931 of a cerebral hemorrhage. Anna seems to have died before reaching the age of 10. But what happened to Kathleen?

I found her in the 1921 Canada census living as a boarder with a family in Fredericton, her hometown. She was listed as a student, though it doesn't say what school she was attending. So she seems to have gone on to some higher education, which is awesome. I'm not sure what opportunities there were for a young woman in Canada in 1921, but she seems to have set about  creating her own opportunities through education. The following year, she went to Boston, Massachusetts, where she apparently lived on her own - the US federal census for 1930 show she worked as a bank clerk, and lived by herself. She went back to Canada briefly in May 1930 (the border crossing record shows she was there for five days), then came back to the Boston. The border crossing also gives her physical description - 5'5", medium complexion, brown hair, and blue eyes. As her mother died in 1931, I wonder if that trip to Canada was the last time she saw her mother alive. After 1931, she was the last member of her family left.

Nine years later, in 1939, she declared her intention to become an American citizen. She was still living in Boston, working as a cashier. This may have been the same job that she was working in 1940, when the census listed her occupation as a saleslady in a department store. Then in 1942, she officially applied to be naturalized as an American. Her petition for naturalization is fascinating, as it gives her physical description - 5'5", 118 lbs, blue eyes, but her hair by that time had turned gray. She listed her address as 78 Carver St. in Boston.


In 1944, Kathleen's name appears in a newspaper article asking for information on her whereabouts. Her aunt, Mary T. McDonald, had passed away in Butte, Montana, and Kathleen was one of her heirs. That is really interesting that her aunt (who apparently lived and died single, as Kathleen would herself do) who, according to her death certificate had lived in the US from around the time of Kathleen's birth, would list Kathleen as an heir to her estate. I hope somebody let her know, and that she was able to receive whatever her aunt left her. I wonder if I could find probate records for Mary and see what her bequest to Kathleen was? The fact that Kathleen was listed as a relative's heir leads me to hope she stayed on contact with her extended family back in Canada. 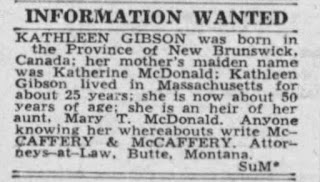 Twenty years later, she was still living at 78 Carver St., and worked as a clerk at the Trailway Bus Terminal. She worked there through at least the mid-1960s. By 1971, Kathleen had retired, but was still at 78 Carver St. Sometime between 1972 and 1977, she moved into an apartment on Boyle St. in Boston. I can't imagine what that was like for her - leaving the home she had lived in for more than 30 years, and probably downsizing to an apartment to live out her retirement years. She wasn't at the Boyle St. apartment for more than a few years, as she was in the Jamaica Towers Nursing Home in 1981. Kathleen passed away in Boston on 13 February 1983, perhaps in the nursing home.

Kathleen's story hit me for a few reasons. One, she outlived everyone in her family by more than half a century. That must have been incredibly lonesome for her - no siblings, no parents, just herself on her own, miles from where her family had passed away. Also, she never got the chance to be a sister-in-law, or an aunt, or a wife or mom or grandmother. I don't mean to say that her life wasn't fulfilling and happy, I sure hope it was. I just see what those relationships mean to my wife and the other women in my life, and it saddens me that she didn't get a chance to experience them.

Another aspect of her life that interested me was the changes in society from the time she was born until she passed away. When she was born, electricity and automobiles were still brand new. She would have seen the introduction of telephones, television, and space travel. She could have grown up in a home and town with little or no electricity, and near the end of her life gone to see Star Wars in the theater. That boggles my mind.

I'm glad I looked into Kathleen's life. If I'm ever in Boston, I would love to look up where she is buried and pay my respects. She seems to have lived a good life, worked hard, enjoyed the fruits of her labors, and stayed in touch with extended family even though she lived far away. That's an example worthy of emulation.
Posted by ironhide781 at 9:37 AM No comments: