To help me in my quest to collect and preserve family artifacts, my mom combed her house and found a few items, most of which I knew nothing about, and gave them to me.

This is a time table schedule for the Northern Pacific Railway Company from 1947. I'm not sure if it was my grandpa's or great-grandpa's (mom wasn't sure either), as both of them worked for the railroad. If it's my grandpa Fred's, he would have been 21 at the time, so it's not unreasonable that it's his. If it's his dad Fred Sr.'s, he would have been around 63, so it's not too unreasonable that it's his either. I'll probably end up asking my grandpa about it, and I'll post the update here.
UPDATE: I asked my grandpa, and the schedule is his. He started working for the railroad on October 1, 1947, and this was their current train schedule.

This is a ribbon my grandmother got for her participation in the Siskiyou County Fair in 1964. She was about 24 at the time, and she, my grandpa Tom, and a friend of theirs (don't know his name) played in a country band they called Kountry Kuzzins. Their band marched and maybe played in the parade, and got this ribbon for their efforts. Pretty cool! 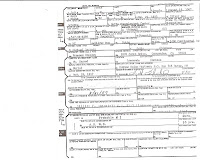 This is a death certificate for Olga (Joseph) (Haft) McKeown, my great-grandmother's older sister. This one I knew about, as I'd asked my aunt to pick it up for me from the county clerk in Butte, Montana, along with 2 or 3 other death certificates. However, I was living in Utah at the time going to school, so my aunt was going to mail them to my mom, or give them to her when they visited, or something. I totally forgot about them (even though I had been the one to request them!) and was pleasantly surprised to see they were in pristine condition, even 7 or 8 years later. My mom really knows how to store things well!
In the future, I plan to take the information I gather from these items and try to dig up a few more clues (maybe a newspaper clipping about the parade? or some info on the trains my grandpa/great-grandpa worked on, or something), and I'll post a follow-up.
Thanks mom!
Posted by ironhide781 at 4:15 PM