Since discovering genealogy podcasts a couple months ago, I've been spending my commute time every day listening to Lisa Louise Cook's Genealogy Gems Podcast, and the Genealogy Guys Podcast by George Morgan and Drew Smith. All of them are fantastic genealogists, and I have been able to put their tips and tricks into practice in my own research, with great results. One example of this happened just this week. The Genealogy Guys have talked about using public and academic libraries, WorldCat, Heritage Quest, and other library-related repositories for your research, which is something I (sadly) haven't done too much of the last few years. I've been trying to find a way to get hold of a copy of a book called Tracks of Time, put out by the Glenella History Book Committee about the area in Mantiboa around Winnipeg and Waldersee. My Joseph ancestors lived in that area for a generation or so, so I've been anxious to see this book. But it's too expensive to buy at the mo (over $70), and no local libraries have it. Per their suggestion, I went on WorldCat to look for it, and saw that two libraries did have a copy. Unfortunately, both libraries were in Canada. Not knowing whether interlibrary loan worked internationally, I thought it couldn't hurt to put in a request for the book, so I did. Then I forgot about it and went on with my research.
Then yesterday, I got an email from my library saying the book had arrived and was available for pickup! I went down on my lunchbreak to pick it up - it's huge! Over 800 pages, about 3 inches thick, and probly 12 or 14 inches long. I spent some time going through it last night, and found the story I knew was already in there about Albert Joseph (my great-great-grandfather Samuel Joseph's nephew, son of his brother Gottlieb) and his family. This story was only two pages long, only really gave info on Albert's wife and children, and I already had a copy of it. So I pulled out my database, and started looking at the other surnames attached to the Josephs to see if I could anything on them.
First I looked for Karl Siegel, who married Wilhelmina Joseph (Sam's sister) and found a 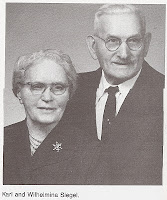 3 page story on them, including a picture! It tells the story of how they met at the butcher shop where Karl worked, and how Wilhelmina's father Ludwig Joseph (my 3rd-great-grandfather) oversaw the construction of his daughter's home. It also said the Joseph family (including Mina and Karl) moved to Montana, but found that Mina's health didn't agree with the climate, so they moved back to Manitoba (a story I hadn't heard, and am still trying to find records to confirm).
Next I rem

emberd that Sam's oldest daughter Olga had married Gustav Haft (also spelled Heft, Hoft, and Hoeft) and looked for them. I found another 3 page story on Gustav's parents, Augusta and August Heft, again with a picture. This was very detailed, and talked about their family's moving from Germany to Russia, and then from Russia to Canada. It also listed Gustav and his siblings and who they married, which gives me more people to do further research on.
After the Hefts, I went back to my database and tried to find another Joseph daughter, and saw Olga Joseph (daughter of Sam's brother Gottlieb) had married a Philip Oswald. I looked in the index and, you guessed it, found a bio of Philip and Olga. By this time I was thinking I was going to end up scanning most of the book. But I had never seen so much info on the Josephs in one place before, and was thrilled to be finding so much.
The only Joseph female I haven't found in the book is Tina Joseph, Sam's sister, who married John Levick in Manitoba. Most of the bios seem to be written by descendants still living in the area, which would explain why Sam and Tina didn't have bios included (both of their families moved to Montana). I've still got a couple more families to look up, so we'll see if there's any more info on them.
The book also has a lot of geographical, social, and historical information in the front. It has several pages of maps of the land allotments, which all show the last name of the original owner. What's more, it also has articles on the cultural groups represented in the area, includin

g one on the Germans that's a translation of an article written in German for a local paper back in 1904. There was another series of articles on the various settlements in the area, including one on Grass River, why my great-great-grandmother Pauline Joseph died. I still need to go back and review the other articles and check for any more that might apply to my family.
One special treat

was a listing of all the churches in the area, with articles of varying length on that church's history, leaders, members, and (in some cases) listings of who was buried in that church's cemetery. The longest article was for the Christ Evangelical Lutheran Church, attended by the German immigrants to the area, including my ancestors! I gathered this from the church's cemetery listings - my great-great-grandmother Pauline Joseph, as well as her husband Sam's parents Ludwig and Justine Joseph, are all buried in that church's cemetery. I plan on writing or calling the church to see if they have any additional information on them.
All of this came from one book, after making one loan request. I was expecting just the two pages, and maybe a couple more. So far, I've got more than 24 pages of info - bios, church histories, settlement histories - directly relating to the Josephs. And maybe more to come. Can't wait to get home and read!!
Posted by ironhide781 at 2:19 PM