This is a postcard bearing a picture of the SS Tunisian. This is the passenger ship my Joseph ancestors sailed on, leaving Liverpool, England on 5 Oct 1905, and arriving in Montreal, Quebec eight days later on 13 Oct 1905.
Posted by ironhide781 at 6:00 AM 1 comment: 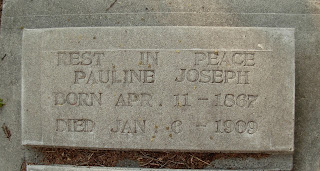 But all in all, I know so little about her. I'd like to learn more, and hopefully with some help from the SGGEE (Society of German Genealogy in Eastern Europe) and other resources, I'll be able to track down some more information on her.
Posted by ironhide781 at 6:00 AM No comments:

And it's not even on a brick wall. I'm stuck as to what I want to do next with my genealogy. I've been working on my German family history class - so fascinating to learn the history of the area where so much of my ancestry traces back to. And to finally understand what many of those place names like Silesia, Pomerania, Hessen, and Alsace-Lorraine that I've come across over the years actually refer to! I've also been working on my DNA analyisis, though I can't seem to decide which test to focus on, or which ancestral line I want to try to isolate and trace. I want to do something to prepare for the DNA conference I'm going to in a couple weeks (!) but I don't know what. Then there are the lines where I've had breakthroughs in the last year or so - specifically the Josephs, Bergstads, and Zitzmanns, where I have a pile of records in the original languages of my ancestors, but not enough linguistic skill to read them fluently and analyze them properly. I still have a number of brick walls or confusing lines I want to work more on - Samuel Joseph's second and third wives are still little more than names (though I did recently find corroboration of the addresses of the witnesses to his second marriage, to Elizabeth Ackermann); Pauline (Rosen) Joseph is still a mystery, as I have her death date and place, and a birth year but not much else; and my Gibson/Cain lines are still hard to find in New Brunswick. Then there are my online family trees that have been pretty neglected lately - Wikitree, FamilySearch, and Tribal Pages all need updating. So much to do! Is this what they mean by an embarrassment of riches?
Maybe I just need to sit down and make a list of all the loose ends I've got, and decide which ones I want to focus on. I thought once I finished the Project, my next course of action would be clear, but so far, I kinda feel like I'm spinning my wheels.
if you were me, where would you start?
Posted by ironhide781 at 5:22 PM No comments: 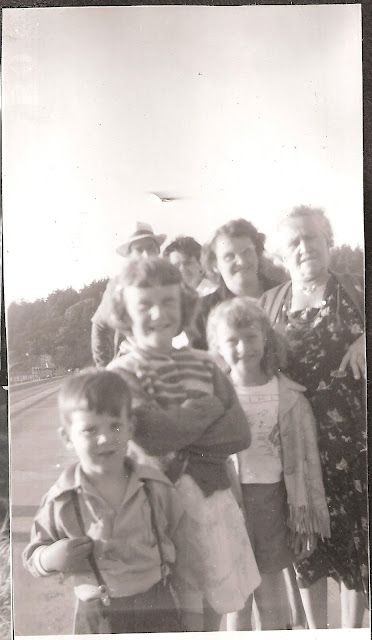 Here's a photo of some of my Zitzmann/Sitzman side relatives. From the back - Charles Wagner Jr, Ellen Richter, Rosie Wagner, Mary Hoffman, Jane Richter, Eileen Nelson, Ron Wagner
Posted by ironhide781 at 6:00 AM No comments:

This is a photo of the family of my great-grandma, Edna Craddock (who is the only one missing from the photo; wonder if she was behind the camera?). From left to right, there's Hazel Craddock, Philena (Beilstein) Craddock, Elsie Craddock, Ernest L. Craddock, and Grace Craddock. It was probably taken in Montana. I don't have a date for the picture, but Grace was born in 1920, and Lena and Ernest had separated by 1930, so I'd guess probably 1928-29.