Terrible coincidences - a mother and daughter

I had some time tonight to do my own genealogy (yay!) and wanted to look into my wife's 3rd-great-grandmother, Augusta (Gast) Smith. I'd gotten a message recently from a DNA match to my father-in-law, who had some info on Augusta I wanted to corroborate, so I went digging.

I found that I didn't have a death certificate for Augusta, just an extraction from some La Porte County, Indiana health records with her death date. While looking for an actual death certificate (which I hoped would name her parents), I found her mentioned on the death certificate for her daughter, Olive Myrtle (Smith) Bloomhuff. Olive died on May 10, 1930 at the young age of 46. The cause of death was listed as: "death post operative: mid-thigh amputation. Elephantiasis lymphangiectatica." The words I could understand were awful enough - having a leg amputated at the mid-thigh due to some form of elephantitis-type disease. I did a little more digging, and if I'm reading things correctly, the disease she died of was filariasis, a disease caused by an infestation of filarial worms in the lymphatic system. The worm larvae are often transmitted by mosquito bites, and the infection directly leads to elephantiasis. Talk about an awful way to go. No info is given on the duration of the disease, so I can only hope she didn't have to suffer long.

Having found this information, I wanted to find Augusta's death certificate and see if she had a less traumatic cause of death. After looking through Indiana death certificates for a bit, I found hers. Augusta passed away on February 16, 1910 at the age of 47, very close to the age her daughter was when she died. The cause of death was difficult to make out, but thanks to the eagle eyes of Judy Russell, I learned how Augusta passed away. Her cause of death was listed as: "hemorrhage during operation to remove a tumor fr Large Fibroid and large Ovaries" (with nephritis, a kidney inflammation, contributing). Immediately I saw the similarity - she went in for an operation, which ultimately caused her death. A mother and daughter, similar in age, similar cause of death. Two tragedies, decades apart, yet so similar it's eery.

To be clear, I have nothing but respect and admiration for those in the medical profession (including my brother and sister). Having spent time in hospitals, I don't know how those who choose that profession can handle doing what they have to do, including sometimes seeing a patient die, not to mention having to be the person that has to pass that news to the patient's family. I have seen firsthand how difficult their job can be, and the effort, energy, and devotion that is put into efforts to save a person's life. It just surprised me to see that a mother and daughter left this world under circumstances that were so similar. I wonder what Augusta and Olive's family thought of those circumstances, and how they dealt with the losses.
Posted by ironhide781 at 10:47 PM No comments:

Well that didn't take long! I got a happy surprise in the mail the other day - the death certificate I ordered for Jacob Henry Beilstein just a week ago came already! So glad that they jumped right on my request and sent it out. 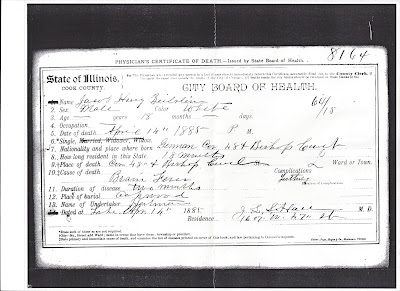 This certificate confirms his name, his age, and his death of death. It's not exact on his age, so I can't calculate his date of birth, but it's pretty close. What's interesting is the nationality is German (which my Beilsteins were), and the place of birth is "Cor 48 & Bishop Court" which I'm guessing is the address of the hospital or house he was born in. I'm guessing it's a house, as it's also the location of his death. I'll need to find a map or gazetteer of Chicago to see where that was.
The﻿ cause of death was "brain fever," where part of the brain gets inflamed and causes symptoms that look like fever. The certificate says he suffered with it for two months prior to his passing. I can't imagine the pain of watching your little son suffer with something like that for two months, and then losing him. When my son Levi passed away at two months old, it happened within a matter of hours of the onset of whatever he died from. Having it drawn out over a period of months would be torture.
The downside is, like John Charles Beilstein, the certificate doesn't name his parents. I'll have to find my Beilsteins in a city directory or something to see if the 48th and Bishop Court address matches them. The address in John Charles' certificate is hard to read, but looks like 3573 Darhield. John died in October 1885, and Jacob in April the same year. If these boys were my ancestors' sons, I can't imagine the pain they must have endured. To lose an 11-year-old and an 18-month-old, so close to each other, must have been devastating. 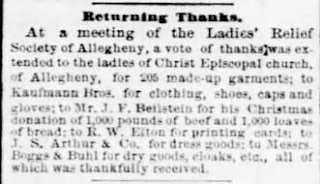 Fortunately, the Beilstein discoveries weren't all tragic. I also found a newspaper article recently about John F. Beilstein, the father of Bertha Beilstein, who tragically murdered her mother after John's sudden passing. This article, dated 23 December 1885, described how the Ladies' Relief Society of Allegheny, Pennsylvania, was expressing gratitude for donations they received for the poor. There were donations of hundreds of garments, printing cards, dress goods, dry goods, caps, cloaks, and gloves to help the needy. On top of those donations, John F. Beilstein donated 1000 pounds (half a ton!) of beef and 1000 loaves of bread to the Society. I've known for a while that John was a successful and wealthy butcher, who trained my ancestor Jacob Beilstein in the same vocation. But to see record of such generosity is just amazing. You don't normally get to find out when people do good deeds like that, so knowing that a relative of mine gave so much to help the less fortunate is just a wonderful feeling. It makes me glad to be his relative, and want to reach to others in a larger way.
Posted by ironhide781 at 11:16 PM 2 comments: