Normally I don't post twice in the same day, but I got tagged reading a friend's blog. So here's 6 random things:

1. I've always wondered (since high school at least) if the whole 'coochie coochie coo' thing with babies comes from the fact that the Japanese word for mouth is kuchi (coochie)

2. Somewhere on this earth, there is a woman giving birth every three seconds. She must be found and stopped. 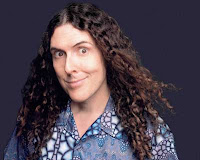 4. I spend WAY too much time on Facebook, I know that, but it's fun. You meet really cool people, get into interesting dicussions, and get to tell people about stuff you read on a 'social networking site' instead of crummy old Myspace.

5. I love looking at old documents - black and white family photos, ship passenger lists, census records, anything - that my ancestors appear in. It helps feel connected to them, and realize that they were real, living people, doing the same thing I'm doing - just living.

6. In a fight between Megatron and Gandalf, Megatron would win hands down. I mean, yeah, Gandalf has powerful magic and took on a Balrog, but I doubt magic could withstand a blast of concentrated energy from a fusion cannon.

We were taught in priesthood/relief society a week or two ago from the Joseph Smith manual that suffering prepares us for the celestial kingdom. I got to thinking, if heaven is a place of peace, rest, and happiness, how would experiencing suffering and pain prepare me for that? I had two thoughts on it -
1. Suffering keeps us humble. It teaches/reminds us that we need God and each other to get through this life, that we can't make it home on our own steam.
2. It's part of the opposition of all things. The suffering we experience, and see others go through, shows us how precious life is, how rare true happiness is, and how great and plentiful our blessings really are. I mean, how often do I thank God for my health? Usually right after I get over a cold or flu or something, but then it slips my mind until I get sick again. Or for my home, or a fully functioning body, or even my family? I hate to say it, but it's probably my suffering that keeps me on the straight and narrow.

I hope someday to get to the point where I'll just stay on the path back home, without having to be dragged back on track kicking and screaming.
Posted by ironhide781 at 9:59 AM 1 comment:

This is where it all hits the fan

Is it just me, or are things spiraling out of control faster every day? The stock market drops day after day after day; Iran and North Korea are working overtime on building nukes, while thumbing their noses at the rest of the world for telling them to stop; the government screwing up the stock market with their 'fixes' and now trying to take over some of our banks; and Obama getting closer to being president, even though he's got the wrong position on just about every topic there is - abortion, immigration, war on terror, health care, gay marriage, gun control, AND he is (or at least was recently) buddy-buddy for decades with hatemongers like Jeremiah Wright and Rev. Flegher and an avowed an unrepentant terrorist! Add all that to the cases of voter fraud already popping up in at least 8 states, a worldwide economic crisis, and the fact that I have to wait until January before season 2 of Transformers: Animated comes out on DVD, and we're talking serious problems here.

So with all this going on, what can we do about it? Not a whole lot, as far as I can tell. I can't fix the government (nor can McCain or Obama, regardless of what they say). I can't tell other countries how they should be run or by whom (though we all know Ahmedinejad needs to be ousted and SOON). But I can hold on to my family and the gospel, teach my kids right from wrong (and that there is right from wrong) and try to live within my means so when times get worse (and I think they will) we'll still be able to keep our heads above water. Even if the whole world goes to pot, we can still be happy in our own sphere. Men are that they might have joy, after all. So don't shut out what's going on in the rest of the world, we still need to stay aware of it, but don't let it become an obsession. Let your family's happiness and security be your main concern, and we'll all come out of this all right, even if it's not until the Millennium that things really settle down.
Posted by ironhide781 at 10:28 AM No comments:

Where does the time go?

Can you believe it? My little girl is 4 weeks old today!! On Friday, she'll be a month! I still feel like she just came home yesterday. We had a minor miracle with her this week - she slept for 6 1/2 hours! I actually got to sleep from midnight till 6:30 without waking up once. Of course, the next night she woke up at 3, and last night she woke up at 2, but still! We're getting there. I still feel amazed and a little in disbelief that she's actually my child. I'm still trying to find that magic balance between family, work, church, and recreation, though that'll probably continue for the rest of my life at this rate. :)
Posted by ironhide781 at 10:11 AM No comments: