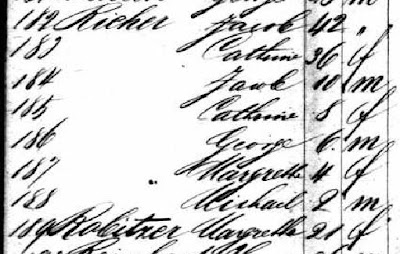 I'm glad Margaret didn't have to make the journey to the New World alone. It must have been quite a trip, but going with family hopefully made it more exciting than frightening. It also reinforces my opinion of Margaret that family was very important to her. She passed family information from the old world to her children in the new; she kept in touch with her family back in France; and when left home, she left with family. What an amazing woman she was.
Posted by ironhide781 at 6:14 PM 1 comment:

The Robitzer family tragedy of 1826

The last few days, I've gone back to researching my Robitzer family in Alsace-Lorraine, fleshing out the family trees and downloading records for the various branches of my family from that part of the world. It's a very fruitful record group for me - the records were beautifully kept, preserved, and digitized, and are very easily accessed for free online. Add to that a very accurate family tree created by a distant cousin, and you have a perfect setup for me to learn a lot about this branch of my family very quickly.

While going through the records, I found something I've never seen before - a death epidemic for one extended family all in the same year (well, half-year really, as the deaths occurred in a 4-month period). The town was Uttwiller/Utweiler (depending on if you spoke French or German),which was not a huge town, and they usually registered 10 or fewer deaths per year around this time period. The year 1826 seems to have been a particularly bad year for Uttwiller, as they registered 15 deaths that year. Of those 15, 7 of them were my relatives, and all 7 of them died between July and November that year.

September saw the death of little Eve Robitzer, the daughter of Anne Catherine Boos's husband's cousin, who was only 4 days old when she passed away.

In October, two of Anne Catherine Boos' sons, 23-year-old Johan and 20-year-old George both died within 4 days of each other.

With so many deaths in so short a time, I wonder if there was some sickness going around. Or maybe, with so many deaths in one extended family, was there some kind of hereditary disease or vulnerability that cost them their lives? Having recently experienced the pain of losing a child, I can't imagine going through that over and over again. The range in ages is pretty widespread - 4 days, 2 years old, 4, 10, 20, 23, and 49. And yet the families stayed in the area for many more generations. So whatever caused these losses, the family stayed put. Maybe they felt they couldn't leave, as it had been home for their family for so long. Maybe they just lacked the means of leaving. Most of the families were farmers, which tends not to be a very lucrative profession. But whatever the case, I'm glad they stuck it out. They kept raising their families and making their livings, leaving records behind for me to find. Family stories, family tragedies like this one, remind me that life has always been hard. But the hard times help you see the good times for the treasures they are, To really appreciate what you have, you need to experiences hard times, even terrible times, once in a while,
or life gets out of focus. Grief and loss have helped me see what really matters most to me, and maybe it did for the Robitzers in 1826 as well.
Posted by ironhide781 at 9:15 AM 1 comment: 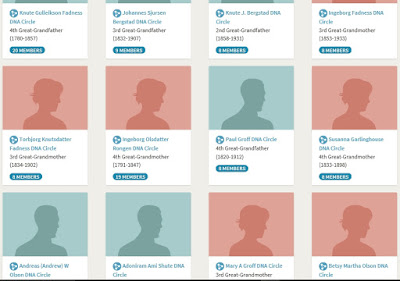 All I've really had time to do so far is check out which ancestors the circles are centered around. The variety is really interesting. ﻿I have 12 circles so far, and 8 of them are for Norwegian ancestors! The closest to me in generations are Betsy Martha Olson and Knute J. Bergstad, my 2nd-great-grandparents (and spouses to each other interestingly). Four more of the circles are dedicated to each of Betsy and Knute's parents - Betsy's parents were Andreas Olson and Ingeborg Fadness, and Knute's were Johannes Sjursen Bergstad and Torbjorg Knutsdatter Fadness. The other two Norwegians in the lot are Knute Gulleikson Fadness and Ingeborg Olsdatter Rongen, who turn out to be Torbjorg Fadness's parents. That means half of my circles come from one ancestral couple and their parents or grandparents. Either these ancestors have a LOT of descendants, or my Norwegian DNA is strongly biased towards them. Or both.
All of these Norwegian ancestors are from my maternal grandfather's paternal side, the Bergstads. There aren't any DNA circles for his maternal Norwegians, the Hammers. I wonder if I'll see any of those pop up later?
My remaining four circles cluster around another family group. Adoniram Shute is my 3rd-great-grandfather on my paternal grandmother's father's side. His wife was Mary Groff, and her parents were Paul Groff and Susanna Garlinghouse. So that group of circles basically covers the ancestors of my great-great-grandmother Eldora Shute (Adoniram and Mary's daughter).
Of my four grandparents, my paternal grandmother and maternal grandfather have ancestors represented in these circles. That means I have no circles as of yet for any of my paternal grandfather or maternal grandmother's lines. My grandpa's lack of circles, I can understand - relatively small families and recent immigrants to the Americas (1840s-1900s). My maternal grandmother's side though, I'm surprised. Colonial English, plus German immigrants with large families, plus French-Canadians with HUGE families. And no circles for any of them? Maybe they'll pop up later. I wonder how often Ancestry updates their circle roll call.
All in all, very interesting to see who my circles center around, and what ancestors pop up in my DNA. I'm very much looking forward to delving deeper into this!
Posted by ironhide781 at 6:00 AM No comments: 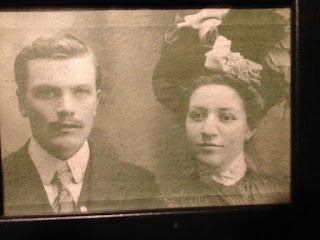 Update: Turns out, I spoke too soon. This is actually not a picture of George and Margaret Waechter. It's actually their granddaughter Sara Waechter and her husband George Diest. That's what I get for jumping the gun on posting a picture. She's still family though!
Posted by ironhide781 at 6:00 AM 1 comment: