Of Beilsteins and Briscoes and relocations

It feels so good to be blogging again!! School has taken up so much of my time the last 6 months, I haven't had more than a few minutes here and there for any genealogy research at all, let alone blogging about it. But I've found a couple of interesting things about my 2nd-great-grandma Philena "Lena" Beilstein that I wanted to write about.

A couple years ago, I found a marriage record for Lena dated 1903, when she was about 15 years old, showing her marrying David Briscoe. I knew she was in Montana by 1907, as that's when she married what I thought was her first husband, Clarence Johnson, so I was shocked to see her in Montana four years earlier. The 1900 census shows Lena and her family - father Jacob (who would die soon after the census was taken), mother Amelia, and sister Annie Margaret, aka Maggie - living in Allegheny City, Pennsylvania. I've wondered since then what Lena was doing out in Montana all alone just three years later. It finally occurred to me last week that maybe she wasn't all alone in Montana after all.

I knew that Lena wound up in Montana by 1903, and the 1910 census showed her mom and sister living in Nebraska, so I'd always thought that Lena had gone to Nebraska with them, and then somehow gone up to Montana and gotten married. That didn't make sense, but based on what I knew at the time, it's all I could come up with. So I thought I'd double check that theory, and go looking for evidence of Lena's family in Montana between 1900 and 1910. And I found it!

I found a city directory showing Amelia living in Omaha in 1901 listed as the widow of Jacob. I expected to find her there, due to her 1910 census record. But the next directory I found her in was a surprise - Carbon County, Montana, the same county Lena and David Briscoe were married in. And right under Amelia was Lena, listed as a student. Lena would have been about 15 at the time, rather young to be listed in a country directory on her own, but there she was. In addition, her brother-in-law Arthur Cooper was listed just a few names down, confirming that the whole family had moved to Montana. 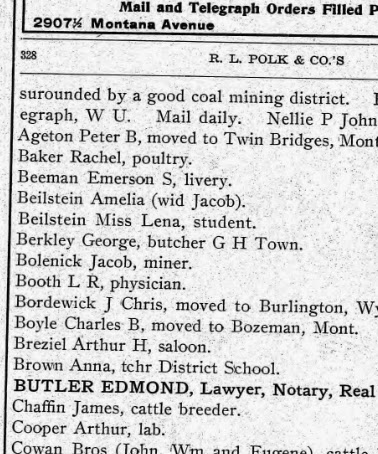 And just to confirm that all the puzzle pieces were in the right place at the right time, I looked for, and found, David Briscoe's family living in Golden, Carbon County, in 1903. His father Thomas Briscoe, and maternal uncle Arthur Barney (who performed the marriage) are both listed in Golden, where they were married.

It was one thing to find Lena's marriage certificate to David. It was another to find that her whole family was living in Montana with her at the time of the marriage. It also helped explain how Lena got to Montana, met David and married him - she moved there with her family. That's a much more likely scenario than a 15 year old young girl going off on her own.

Amelia remained in Carbon County for a few more years, living in Gebo in 1905 and Joliet in 1907. In both 1905 and 1907, Lena is listed right next to her mom under her maiden name. It seems that her marriage to David was a short one. I couldn't find any newspaper or other records showing what happened between them. The only other record of the marriage is a little note in her marriage record to Clarence Johnson in 1907, that she was previously married.

Amelia next appears in the 1909 Omaha city directory, showing that she had moved to Nebraska between 1907 and 1909, putting her right where she appears in 1910. As Lena had married Clarence Johnson, she stayed in Montana, and would remain in Montana for the rest of her life as far as I've been able to determine.

The years 1900-1910 were a lot more eventful for Lena and her family than I previously thought. They lost Jacob and moved to Omaha between 1900 and 1901; moved to Carbon County, Montana by 1903, the same year Lena and David Briscoe were married; Lena and David probably split before 1905, as she's listed under her maiden name as though no marriage had taken place; Lena married Clarence Johnson in 1907; the Beilsteins stayed in Montana until 1908-1909, when everyone but Lena moved back to Omaha.

Not a bad weekend's work! I'm hoping to get a little more research time in tomorrow, as I think I may have found evidence that the Beilsteins lived in Omaha in the 1890s, rather than in Pennsylvania as I'd previously thought. Just when you think you know a family...
Posted by ironhide781 at 1:32 AM 1 comment: