With last Sunday being Mother's Day here in the US, I wanted to post a little tribute to the mothers in my family tree. I come from many remarkable and amazing women. I wish I had the time to pay adequate tribute to them all, but for now, I'll start with one - my great-grandmother, Rosie (Sitzman) (Wagner) Morris. She was an immigrant from what is now the Czech Republic, where her mother's family had lived for centuries. I still don't know for sure who her father was, as birth records aren't publicly available yet for the year she was born. She grew up in Montana, where she attended Catholic school as a little girl. She married my great-grandfather, Charles Wagner, and moved to Washington state, where they raised their family. After Charles' death, she later remarried to Clarence "Unc" Morris, and moved back to Montana, where she passed away in 1983.

The following two pictures best sum up my impression of her, based on the research I've done, the pictures I've reviewed, and the stories I've heard from family (she passed away when I was a little kid, so I only have one clear memory of her). The first picture is of Rosie and her family visiting the grave of her son, Charles. He died when he was 10 of tuberculosis. Having buried a child myself, I can imagine somewhat the pain and sadness she felt. Her expression, and that of her husband, to me epitomize the grief you feel when you bury a child. There just aren't words for it. 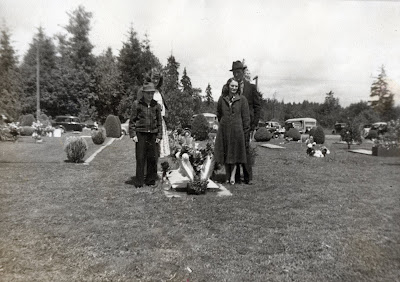 But I equally love this picture (which I think I've shared before on this blog). It was taken many years later, and shows that while she did experience great sorrow and grief at times, she also didn't let those emotions rule her life. She continued to look for joy and happiness. The sheer number of pictures she took (numbering in the thousands!) of her children, and especially her grandchildren, shows me that she found that joy in her family. 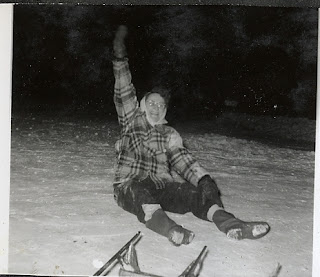 Her daughter, my grandma Blossom, was the same way - family was everything. That love of family carried down to my dad, who has a closeness with his siblings and cousins that I envy. My dad and mom both did their best to instill that love of family in me and my siblings, and I hope I'm doing my best to pass it to my kids as well. Like Gordon B. Hinckley once said, don't let yourself be the weak link in the chain of the generations. Grandma Rosie was, and in many ways still is, a powerful influence in my family. I hope that I can continue to weld links in our family chain with the same strength and love she did.

Update: I tried colorizing the pictures, and the effect is amazing. The picture of Charles's grave is really different when you realize it was a beautiful sunny day. The black and white version captures the feeling better, but the colorized kind of helps me put that emotion in a larger context. The colorized version of the sledding picture almost looks like a still shot from a home movie. I love technology! 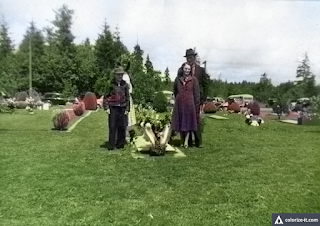 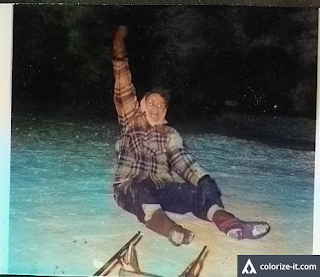