Just when you think you know someone...

I finished going through all the church records I got from Christ Lutheran Church in Manitoba, and boy, what an education! Most of the records were for Gottlieb Joseph's family, as they seemed to stay closest to the church, and for the longest length of time. I did get to see some of my direct ancestors in the records, though, and that was really neat to see. Here's some of what I found:

My great-grandmother Augusta was a witness for her older sister Olga's wedding to Gustav Hoeft (also spelled Haft, Heft, and Hoft) at her wedding in 1906.
Of the five children in the family, only Augusta and her sister Lydia were confirmed in the church. Augusta was confirmed in 1906, just a few months after her arrival in Canada, and Lydia in 1907.
Augusta was a witness at the marriage of her cousin Olga Joseph (yes, same exact name as her sister) to Philipp Oswald in 1908.
Also in 1908, my great-great-grandfather, Samuel Joseph, was named godfather to his nephew, Helmut Joseph (the only time Samuel appeared in a record that didn't directly involve him).
Augusta was also godmother to her cousin, Wilhelmina Magdalena Liona Siegel, when her cousin was baptized in 1912. That suggests that she stayed in contact with her family up there, maybe even made some trips.

It was fascinating for me to see these records. The other records I've found of my great-grandmother - censuses, passenger lists, even her marriage records - seemed more of a "here I am" stamp, showing me her location at one point in time. These chuch records just bring her to life for me. They show her being involved in a church community, staying interested and involved in important events in her family's lives. It's also interesting that her siblings (with the exception of Lydia's confirmation and Olga's wedding) are totally absent from all of the church records. I know Augusta's brother Elmer ended up marrying an Irish Catholic girl named Julia Barrett, and her sister Helena married Jack Walsh, who was also Catholic. The aforementioned Olga Joseph (Augusta's sister, not cousin) married Gustav Hoeft, who came from an active Lutheran family, and a couple of their children were baptized into the Lutheran church. But after Gus died in 1949, she married Michael McKeown, an Irish Catholic (notice a trend here?). Lydia married Jacob Reitnauer, an active Lutheran German, and stayed Lutheran once they moved to South Dakota (per the South Dakota state censuses I've found so far). And Augusta's first husband was Charles Steffan, who might have been Lutheran as well; I don't know for sure if he was, but I do know they were married in St. Mark's Lutheran Church in Butte. It's just intriguing to see a trend like that - those who were in the church records stayed active, and those who weren't, didn't.

But as for the title of the post, it's more in reference to a couple of things that I've come across recently. One is a church record that my great-great-grandfather, Samuel Joseph, appears in. I knew that his first wife, Pauline, died 6 January 1909, and that he moved with his five kids to Anaconda, Montana, in April that same year. So far as I knew, he lived with his kids until they all married off, and then with one or the other of them after they'd all gotten married until he died in 1955. However, in going through the church records, I found one that pointed to a chapter of Sam's life none of us knew about - his second marriage. 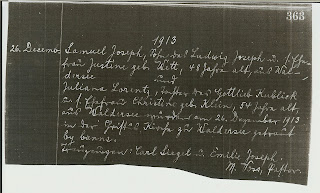 According to the marriage record Sam married a woman named Juliana Lorentz, daughter of Gottlieb Kublick and Christine (nee Klein). Her name is interesting because it suggests that this wasn't her first marriage either, and because Sam's brother Ludwig/Louis married Seraphina Lorenz, who could have been a relative. I plan on following up on this, once I get the marriage certificate for Sam and Juliana (which I ordered a couple weeks ago, and should be getting in the mail any day now). I'll need to order the marriage certificate for Louis and Seraphina as well, but first I want to find out more about this mystery wife.

Since I discovered the existence of this second marriage, I've tried to find more about Juliana, but she doesn't appear in the 1911 or 1916 Canadian censuses, and a general search of Ancestry.ca turned up nothing. Nor could I find her in the 1930 Montana census where Sam is living with his daughter Augusta, son-in-law Frederic Gibson, and grandson (and my grandfather) Frederick. In that census Sam's marital status is widowed, which I'd always taken to be a reference to Pauline, his first wife. Now it might actually be referring to Juliana.

The other interesting tidbit from the marriage record is that (if I am reading the German correctly) it says that Sam was living in Waldersee at the time of his marriage, which was 26 December 1913. Did Sam move to the States, then move back to Canada? It might help explain why I can't find him in the 1920 census. But neither can I find him in the 1916 Canadian census. The time between 1913 and 1930 is kind of a "lost period" for Sam. I'll have to do more digging to see what happened to him during this period. But for now, I'm still getting over the shock of the second marriage. I wonder what other surprises I'll find? 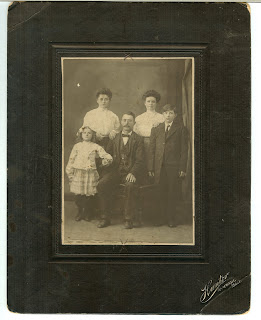 Turns out, I've already found a couple! We had a family reunion for my grandma Blossom's Wagner family a couple weeks ago, and on the way to the reunion, we stopped at my grandparents' house for breakfast. While we were there, my dad thought it'd be a good idea to bring the Wagner pedigree chart we printed a few years ago, just in case the chance to talk genealogy ever came up (it never did, sadly). While looking for it, I came across a notebook on the Josephs my mom had put together for my grandpa, which everyone had forgotten about. In it were mostly just some pedigree and descendancy charts (which I've filled out quite a bit more in the 11 years since they were created), but towards the back were some pictures I'd never seen before. One of them was a photo of Sam Joseph and four of his kids. Papa Fred recognized three of them, but didn't know the fourth (I think it's Lydia, the daughter who married  Jacob Reitnauer). If I'm right, then those in the photo are  (l-r, b-f) Augusta, Lydia, Helena, Sam, and Elmer Joseph. The lower right corner of the matte board is stamped Hunter, which  I'm assuming is the photography studio that took the photo. It has Anaconda, Montana stamped underneath it, so that would date the photo to sometime around 1909-1910 (between when they moved to Anaconda and when Augusta got married to Charles Steffan). There's a handwritten note on the back that says "Mrs. Olga Haft" so I think they took the photo and gave it to Olga (who isn't in the picture). I just couldn't believe there was another photo of Sam and the kids. I was (and still am) ecstatic. It gives me hope that there might be other pictures floating around out there. 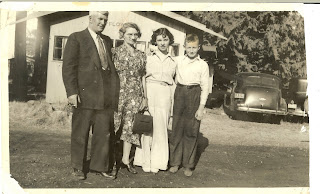 The last thing I found out about was another picture in the same notebook on the Josephs, which led to the other reason for the title of this post. There was a picture of four people, one of which I recognized right off to be my great-grandfather, Fred Gibson Sr. On the back someone had written "Freddie, Vera, Emma & Fred  Deer Lodge, Mont 1938." I asked my grandpa about it, and he said it was him, his dad, his dad's second wife Emma, and his step-sister Vera. I about choked when he said step-sister! I had no idea he even had a stepsister! I never thought to check if Emma had any children from her previous marriage (I can't remember who she was married to, I'll have to follow up on that). I've never heard anyone mention Vera before, so I'll see if I can get more info on her. But to think of my grandpa having a step-sister is just mind-boggling. He's always been an only child in my mind, so this really shakes things up a lot.

In short, it's been a very eventful, very paradigm-shifting couple of weeks. My grandparents are in town today, so hopefully I'll be able to mine a few more details about some of these new facts.
Posted by ironhide781 at 10:12 AM 1 comment: