One more for the Cain family

As I was wrapping up my last post on the Cain family history, I did some quick searching on Ancestry to confirm one or two of the dates as I was writing about. While searching, I came across this little gem. 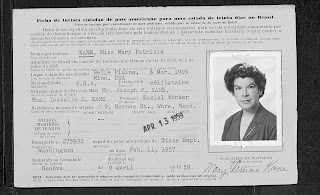 It's an immigration record for Mary Patricia Kane, my 2nd cousin twice removed, and a great-granddaughter of Dennis and Catherine Cain. What's crazy is that this is an immigration record for her to enter Brazil! She was 50 years old at the time, and traveling to Brazil, though I'm not sure why. I haven't tried to Google translate it yet, so maybe the record itself will tell me something about why she went there. I know she came back to the States, because she died in 1992 and is buried in the same Tacoma cemetery as her father, Joseph Patrick Kane. I want to go visit that cemetery now and see where my Kane relatives are situated there. Maybe there's a Kane family plot?

What's really cool about this record (aside from the connection to Brazil) is the photograph. It's rare to find something out of the blue for a cousin that has a picture attached, and so much family info as well.
Posted by ironhide781 at 2:36 PM