Cain family history page 8 - Don't you wanna be somebody?

Today we look at page 8 of the Cain family history, which focuses on the relationship between Dennis and Catherine Cain. 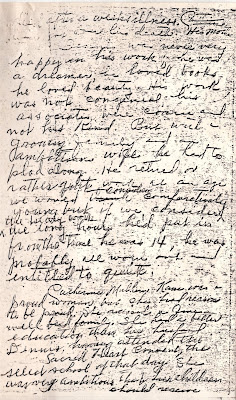 This page picks up where the last one left off, with the death of Dennis and Catherine's son Dennis, who supposedly died as an adult, saying Catherine never got over his death. The description the author gives of Dennis (the dad) is interesting - not happy in his work, a dreamer, loved books and beauty, but forced into a job he hated because it was the only way he could provide for his "growing family and an ambitious wife." I can relate somewhat - it took me a looooong time to get to the career I dreamed of, but I didn't hate the jobs I had along the way. I rather enjoyed them for years, until the parts that made them enjoyable where changed or removed. The author also says Dennis retired early (though no year or age is given), but since he began working at the age of 14, and was forced into work he didn't like, he was probably worn out at an earlier age and "entitled to quit."

Her description of Dennis's wife Catherine (Mulhearn) Cain is interesting as well. She calls Catherine "a proud woman," but then says she had reasons to be proud - her upbringing in a well-bred family, her education at the Sacred Heart Convent (which she calls the "select school of the day"), and mentions her ambitions for their children, though those are described on the next page. She reminds me of someone I dated many years ago, who I wouldn't describe as proud in the same sense, but definitely had ambitions for her future family. I personally don't really have a burning need to climb a corporate ladder, obtain recognition and renown, or any of that. I just want to make enough to provide for my family, and enjoy the work I do. She asked me once "Don't you wanna be somebody?" I can kind of see this depiction of Catherine doing the same thing to Dennis. If this is what they were really like, you almost wonder what drew her to him in the first place - he had little to no education, no training or skills, no money, no large family - basically the polar opposite of what she is described as having. They say opposites attract, but in terms of people, so do likes - people with similar backgrounds, views, religious beliefs, goals, etc. So far in this history, the only point of commonality I see between Dennis and Catherine is their faith. If that was really the case, it seems to have been enough, as they were together until Catherine's death in 1881, two and a half months after their 41st wedding anniversary. He outlived her by 25 years and never remarried as far as I can tell. That couldn't have been an easy way to live for a quarter century, but he did it.
Posted by ironhide781 at 9:38 PM