This page of the Cain history covers some very interesting ground. 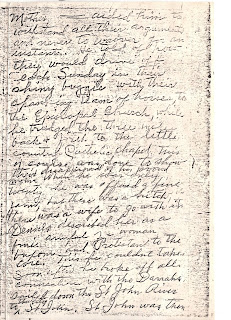 It continues the story of Dennis living with his aunt and uncle Darrah in New Brunswick, saying that the faith and conviction instilled in him by his mom helped him "withstand all their arguments," suggesting they tried to convince him to convert, but he wouldn't. Religious discussions with family can be difficult, but arguments to convince someone to convert are just painful, especially when neither side is willing to budge or agree to disagree. It's interesting that the Darrahs were supposedly willing to force him to walk several miles to his own Catholic while giving everyone else a ride in the family buggy to their Episcopal church, and all to show their disapproval of his mother. It honestly makes me think of Harry Potter - an orphan, living with an aunt and uncle who mistreat him because of the lifestyle choices of his mother. I have to say I love the description of a "spanking team of horses."

Then comes the turning point in the family relationship. When Dennis was 20 (so about 6 years after the deaths of his parents), the Darrahs offered him a farm of his own, but on the condition that he marry a woman of their choosing. And of course, that woman was "Protestant to the core." This was apparently the last straw, so he turned down the offer and severed all connections to his aunt and uncle's family. He then set off on his own down the St. John River to the city of St. John, New Brunswick.

When I first got into the genealogy, the first discovery I made was finding my great-great-grandfather John Gibson, his wife Catherine Gibson, and their little daughter Annie, living in the home of Dennis Cain, his wife Catherine Cain, and their children in Saint John, New Brunswick. What's interesting is that Catherine Gibson (Dennis's daughter) married an Anglican, and Dennis was apparently fine with that. Not only that, when the Gibsons later moved to Montana, Dennis followed after them after the death of his wife Catherine. If the farm and wife story is true, it puts a very interesting spin on his relationship with his daughter and son-in-law. Almost like he was determined not to do to them what had been done to him, even if he may have disapproved of her choice of spouse.

My grandpa Fred Gibson told me a story he heard from his cousin Jack Condon (one of Annie (Gibson) Condon's sons) that Catherine was a faithful Catholic and went to church every Sunday, while her husband John waited for her outside the church. John never went in, but he never opposed her worshiping the way she wanted to. It doesn't seem like the religion was passed on to Catherine's kids, as Papa Fred's dad bounced around from religion to religion throughout his life (even spending a few years as a member of my own church, The Church of Jesus Christ of Latter-day Saints).. Really makes me think how easily my family could have turned out differently. What if Catherine had decided to marry a Catholic? Or what if John had converted and raised his children Catholic? My uncle Randy is a Catholic, but he wasn't raised as one, and no one else in my family is, on either side so Catholicism feels distant to me. Catherine (Cain) Gibson, and my great-grandma Rosie (Zitzmann) Wagner on my grandma's side are the closest ancestors in terms of generations away from me that were Catholic, but I think grandma Rosie stopped practicing later in life (I'll have to ask my dad or his siblings about that though, I don't know for sure). I attended a Catholic wedding earlier this year, and it felt so completely foreign to me. There were some familiar elements, but a lot of the ceremony and procedure were so different from what I was used to. It's kind of fascinating that something that played such a big part of my ancestors' lives is as foreign to me as Japanese would have been to them.
Posted by ironhide781 at 11:08 PM