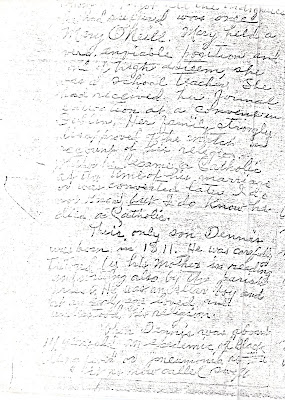 So John O'Kane's wife was revealed to be Mary O'Neill. She was apparently a school teacher, which Virginia says was a highly esteemed and enviable position. Maybe it's my upbringing and societal conditioning speaking, but teachers never seem to get the respect they deserve for all the work they do. Maybe 1800s Ireland was different?

The history also says Mary was educated at an unnamed convent in Dublin. Again, that's across the island from County Mayo, on the eastern coast of Ireland. Were there convents for young single girls? It just seems like Virginia is naming big cities - Dublin, Belfast - for the locations of these events. Granted, there were people who lived in those big cities, but now John and Mary are both said to have crossed the continent for their education and occupation, and it has me wondering if that was really a common thing to do? If Mary was a school teacher and was trained in a convent, was it a religious school? The history doesn't say.

John and Mary's marriage was opposed by her parents due to John's Protestant faith, so he apparently converted, if not for the wedding then sometime after. Dennis's daughter Catherine married an Anglican, so religious differences in that time weren't always a bar to marriage, but I can see how it would be. Catherine had to get a special dispensation from the local authority in New Brunswick to marry John Gibson, but she did it. It's strange to think her grandfather may have left the faith she married into.

Dennis Cain was apparently the only child of John and Mary, born in 1811 according to the history. That's a few years earlier than what I found in census records, but censuses have a way of being wrong about a lot of things, so I'm not bothered by that. He was supposedly taught Catholicism by his mother, and was apparently an altar boy and loved his religion. His continuing association with the Catholic Church in Canada and Montana certainly bespeaks a deep level of commitment to it.

The bottom of the page mentions an epidemic of black lung fever when Dennis was about 14, so about 1825. I couldn't find any explanation online of what disease "black lung fever" was referring to. Black lung was a disease caused by chronic inhalation of coal dust, but fever wasn't a symptom of that. There were outbreaks of cholera and typhus around that time, maybe one of those are what she meant? Dennis did live through at least a couple epidemics, though depending on where he was, he may or may not have been directly affected by them.

I think to corroborate the stories thus far, I'd have to locate the marriage of John O'Kane and Mary O'Neill sometime around 1810, and probably somewhere in Northern Ireland. If that much checks out, then I can look into the political movement and religious conversion parts of the story.
Posted by ironhide781 at 8:40 PM