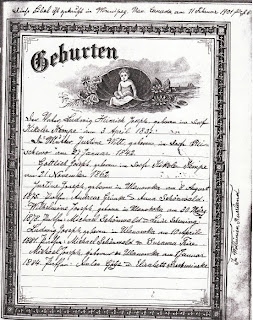 As a genealogist, I've heard several stories about how much information can be found in an old family Bible. I got another taste this month of just how rich family Bible information can really be. Just recently, a cousin of mine sent me photocopies of some pages from a family Bible I never knew existed - a Bible from the Joseph family (the family of my grandpa Fred Gibson's mother, Augusta (Joseph) (Staffan) Gibson). Jim Joseph, a relative of mine up in Canada, was nice enough to scan copies of the family bible pages his mother has and email them to me. Once I received the pages, I was suddenly grateful for the class I took at BYU on reading old German script - the Bible and all the entries were in German! For some reason, I guess because they were in the New World, I just assumed the Bible and family data entries would be in English. I'm not sure who wrote the entries, but all the births look to me as though one person did them in one sitting. The handwriting is all very neat, done in the same style and (from what I can tell) the same ink and pen. I'm not making myself out to be an expert on handwriting (you'd know I'm not if you've been unfortunate enough to have read something I've written). I just mean there's no noticeable variation in the entries that suggests a different person wrote it, or with a different type of pen.
Fortunately, since I don't know German except for the words 'born' 'baptism' and 'hello', there's a transcription and translation that Jim included for me. One of the most interesting things about these pages is the note written at the top of the page for births. According to the translation provided, it says "This Bible was bought in Winnipeg, Man., Canada on 11 February 1901 for $5." So the information in the Bible can't be any older than that date. It's just fascinating to think of one of my ancestor's at a store in Winnipeg, picking up this German Bible, going home with it and starting to make all these entries.

The births listed are those of Ludwig Joseph, my great-great-great-grandfather, his wife Justine (Witt) Joseph, and five of their children - Gottlieb, Justine, Wilhelmine, Ludwig, and Michael (I did find it interesting that Michael was spelled in German the same as it is in English). One thing I noticed immediately - my great-great-grandfather, Samuel Joseph, was not listed. I had wished to see him in there, and was a little disappointed he wasn't. So that struck me as a little odd that one of their children had been left out.

Another thing that gave me pause was the gap between Gottlieb and Justine. Gottlieb and his father are listed as being born in Kikoler Kempe, and Gottlieb's mother Justine as born in Reischewo. I have no idea where those two places are, so I'll need to email the German-Poland-Volhynia mailing list I'm on for a little help on figuring out where they are. Also, Gottlieb was listed as born in 1862, and Justine in 1875. That's a 13 year gap, which is unusual in most families. My Samuel Joseph was born about 1866, so he would help fill that gap (had he been listed). They also listed the birth of Ludwig (the son) as 1881, ten years later than I had seen listed in the 1911 Canadian census (though this wouldn't be the first time the census was wrong). Jim had also mentioned Ludwig and Justine had another child, Henry or Heinrich, and he wasn't listed either. These pages were giving me almost as many questions as I already had about the family!

However, not all of the data was previously unknown or disagreed with other records I'd found previously. The birth dates for Justine and Wilhelmine matched exactly with their birth records as given in the registers I'd found on FamilySearch in Lutheran Church Book Duplicates database. The birth place for Justine and Wilhelmine (they were both born Ulanowka, in the Volhynia region of modern-day Ukraine) matched up as well. What's more, the information in the Bible list of births led me to find the birth record of Ludwig Joseph (the son) in the Lutheran Church Book Duplicates database (which you can see in the above picture). The SGGEE-VKP (short for Society for German Genealogy in Eastern Europe - Volhynia, Kiev and Podolia Parishes) birth database had Ludwig's name backwards, listing him as Joseph Ludwig, rather than Ludwig Joseph. I had a feeling I should look for Ludwig's mom's name (Justine Witt) and not his dad's, and search for the birth date, and there he was. So the data in the Bible indeed proved accurate on everything I could test against in original records from Russia. This was very exciting!
The main thing I learned from this family Bible - the Josephs were accurate in their family information, at least as recorded in the births page (I haven't yet started to analyze the info from the page on deaths). The names, places, and dates they recorded in this Bible matched up exactly with original documents back in Russia. I think I now know where my grandpa Fred gets his amazing memory. I hope some of those memory genes have filtered down to me, because the handwriting genes sure didn't.

Update: I received word back from a couple folks on the German-Poland-Volhynia mailing list, and they have located Kikoler Kempe. It's also known as Kepa Kikolska, Poland, as shown on this map. http://bit.ly/fBM4p7 This is where my 3rd-great-grandfather Ludwig Joseph was born in 1837! Thanks to Jan Textor and Jerry Frank on the mailing list for the info.

Update 2: I zoomed out on the map for Kepa Kikolska, and noticed it wasn't far north of Warsaw, which is where I originally heard Tina (Joseph) Leistikow was born (though I later found out it was Ulanowka, as noted above). So the fact that the family did live near Poland around the time the kids were born did filter down the generations. Not only that, on Samuel Joseph's death certificate, his daughter Pat Walsh gave his birthplace as Torun, Germany. As far as I've been able to find, there is no Torun, Germany, but there IS a Torun, Poland, a not-too-unreasonable distance northwest of - Kepa Kikolska! It just keeps coming full circle, what I learned years ago is coming into a brand new light. I LOVE genealogy!!!!

Update 3: Thanks to Jerry Frank and Hannes Werner of the mailing list, I now know that Reischewo is a town some miles south of Kep Kikolska, also known as Rajszew or Rayszewo.
Posted by ironhide781 at 11:56 PM