And the award for longest name goes to...

When I first got started in genealogy almost 20 years ago, I did what a lot of people did - I went to online family trees, downloaded their contents wholesale, and incorporated them into my own tree. I discovered later what a bad idea this is - people can put ANYTHING in their tree, and if you don't source it carefully, you're left with a tree full of junk with no idea where it came from. I've done a lot of pruning over the years, and cleaned up and sourced what I've found, so I feel pretty good about almost everything in my files. There's still a few things that have bothered me though.

One of those has been the name of one of my 4th-great-grandmothers. The info I downloaded into my files gave her name as Johanna Maria Dorothea Elisabeth Hildebrand. Quite a mouthful! The only problem was, I couldn't find any documentation to back up any of those names except two: Johanna Hildebrand. This is why:

Wilken (originally Wilck) was the surname of her first husband, Johann Jochim Friedrich Wilck. He died shortly after they got to America, which led to her remarriage to Henry. But in all these records, she is usually known as Anna, once Hanna, and once Johanna. The other three names aren't even hinted at with a middle initial. That led me to wonder - where did those names come from? Did someone find a Maria Hildebrand, or an Elisabeth Hildebrand, and assume it was the same person? Was it family lore? Or were they complete fabrications with no basis in reality? I never deleted the names, but I never fully trusted them either.

Then earlier this week, I was rummaging through my files and found that I had the names of Johann Jochim Wilck's grandparents, Johan Wilck and Anna Dorothea Borchert, but no dates or even a location for them. That got me wondering - could I find anything on them to at least round out some details on them? So I went digging.

It only took a few minutes before I found them. Ancestry has a really good database of German Lutheran records, and I found the marriage record for Johan and Anna in Ziegendof, Mecklenburg in 1790. Pretty awesome! That record led med me to the death record of Johan and Anna's son, Jochim Friedrich Wilck in 1842. Jochim Friedrich Wilck was the father my ancestor's first husband. After finding that record, I decided to search for Johanna and Johann's marriage. And I found it!

Johann and Johanna married on 10 February 1843, just 9 months after Johann's father passed away. But the most interesting part of the record is the name of the bride: 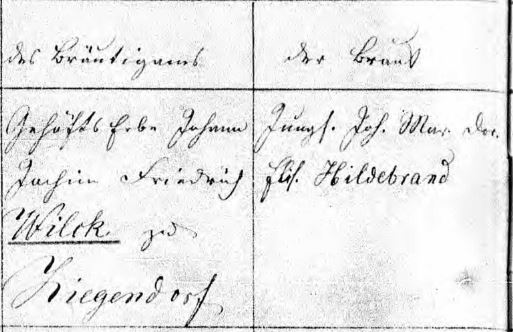 My jaw just hit the floor - I could not believe it! Her name really was five names long, and all the names I had been led to believe were hers, were there, in the right order. Just to confirm it, I found the birth records for Johann and Johanna's oldest two children, and her name is spelled the same way in both.

So, I guess the lesson is sometimes grabbing all your ancestry off the internet can give you a lot of incorrect info, but sometimes, the information turns out to be spot on correct. It's still best to verify everything you have, but don't be surprised if sometimes you find exactly what you were looking for, even if it seems totally implausible.
Posted by ironhide781 at 3:51 PM