While going through another batch of record matches from MyHeritage, I came across an interesting hit on my Harris side. It was for Lucinda (Harris) Fulkerson, the older sister of my 2nd-great-grandfather Frank Benjamin Harris. Lucinda was listed as a member of the Society of Montana Pioneers in their 1899 volume Society of Montana Pioneers: Constitution, Members, and Officers, with portraits and maps. 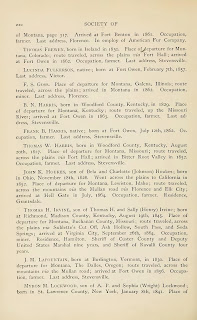 A quick glance at the page showed me that Lucinda wasn't the only member of her family in the society - her father Thomas W. Harris, uncle Benjamin Harris, and brother Frank B. Harris were also listed as members. It made me stop and think for a minute - this was not a society of descendants of pioneers﻿. This was a society of the pioneers themselves. I don't think I've come across another society (not counting military groups) that was built to honor the deeds and doings of the living generation. Makes me wonder what they did at their meetings (assuming they had them). I also saw that Thomas served as an officer for the society, representing Ravalli County in 1894, just three years before his death.
Seeing Thomas and his kids in the society, I got to wondering - what about his brother-in-law David Pattee? David married Thomas's sister Emma, who had come up from Missouri with her mother Lucinda and brother Benjamin some years after Thomas moved there in 1852. David and Emma married sometime around 1865, so that should have been early enough for him to count as a pioneer as well, I figured. A jumped a few pages forward, and sure enough, he was listed as a member of the society as well.

He didn't get quite as full a treatment as the Harrises did, but he was in there. But his last address really caught my attention: Tacoma, Washington. That is literally fifteen minutes from my house! I suddenly had to know more about him.
I already knew David was born about 1828 in New Hampshire, and had moved to Montana in the 1850s or 60s, where he met and married Emma. They had five children together - Cyrena, Maud, Benjamin, Lucinda, and David. My previous research on him had stopped about 1880, when his family was still in Montana. I had no info on their having lived in Washington state. Some quick digging showed me they lived in Pierce County (which includes Tacoma) in 1889, then moved to Chehalis County (later Grays Harbor County) by 1894. In the 1900 census, David was living with his daughter Cyrena "Rena" Bell and her three kids.
I find it very interesting that David had lived on opposite ends of the country in an age where crossing the country was not an easy thing to do at all. The transcontinental railroad wasn't completed until 1869, years after he was already in Montana. How did he get there? What drove him to leave the Northeast, and why pick Montana of all places? What drove him to leave Montana and go even further west? These are probably questions I'll never have answers to, but it helps me see him and his family as real, 3-dimensional people.
Finding information about this family in and after 1900 was complicated by conflicting information. In the 1900 census, David was listed as a widower, suggesting that Emma had died between the 1894 and 1900 censuses. However, David's obituary from 1901 says he was survived by "a wife and two children at Los Angeles, Cal., a daughter, Mrs. BELL, at Elma, and a son at Westport". Did David and Emma separate? Why would his obituary list Emma as his wife, and the census say she had died? I have no answer to that so far. I found a listing for "Pattee, Emma (wid David)" in the 1901 Los Angeles city directory that seems to indicate she was alive when he died. As for the kids mentioned in the obituary, the 1900 census shows their children David A. Pattee and Lulu (Lucinda/Luda) Pattee as roomers with a Bowman family in Los Angeles. That would mean the son in Westport would be Benjamin, though I can't find any records on him after 1894.
I kept searching, and could find no death record for Emma. Benjamin and Maud disappear after 1880 and 1894 respectively. I did find more information on Rena though. In 1900, Rena was a 33-year-old double widow; her first husband William John Woods died between 1892-1895, and her second husband James Bell died between 1895 and 1900. That kind of loss must have been very painful for her and her children. She remarried in June 1901 to Edwin/Edward Hunter, just three months before her father passed away (which makes the obituary more confusing, as she should have been listed as Mrs. Hunter, not Mrs. Bell). The 1910 census lists her children with their fathers' surnames of Woods and Bell, which both helped me verify that I had the right family, and made me wonder why she never changed them. That census also shows that she bore four children, three of whom were living. I can't find any record of the fourth child, and with three husbands in two states, it won't be easy to find him/her. Rena and Edward were married for 19 years, until Edward died in 1920 just five months after the census taker enumerated them in Aberdeen, Washington. It made my heart ache for this poor woman, who had now buried her third husband, a child, and her father. She remained single until her own death in 1943 in Seattle. She's buried in Seattle, about 30 miles north of here.
Once again, a "quick search" to find one record on someone snowballed into a lot more research on a hitherto unexplored branch of my tree. I'm glad I found Rena's story, and feel so bad that she had to endure so much loss. Her story is sad, but that makes it worth remembering. Hopefully her descendants know something of what she endured in raising her family. It makes me appreciate the time I get with my wife kids, and makes me want to make better use of the time I have with them. I think I'll take a trip sometime up to Rena's grave, to pay my respects to this cousin of mine who endured so much.
Posted by ironhide781 at 6:00 AM