Genes Day Friday - The biological father of grandma Edna is...

Several years ago, I was discussing my latest genealogy finds on the Craddock side with my wife and parents, going over the many marriages of my 2nd-great-grandmother Lena Beilstein. I told them about how Lena left her second husband Clarence Johnson for her third husband Ernest Craddock right around the time she became pregnant with my great-grandmother, Edna Craddock. My mom asked "Well, how do we know if Edna's father was Ernie or Clarence?" My jaw hit the floor - I'd somehow never considered that Edna's biological father may have been Clarence. I determined then I needed to have a known Craddock cousin take a DNA test, so we could see whether Edna's father was Ernie or Clarence.

The obvious choice for the test was a cousin of my grandmother's, who shared the same grandparents, Ernie Craddock and Lena Beilstein. I am very fortunate to have many of her cousins on that side still living, but unfortunately, my DNA funds had dried up and other projects (like going back to school and finding a new job) took precedence in the budget. Then earlier this year, I got little something extra at work, and I knew exactly what to do with it - buy a DNA test! I contacted one of grandma's cousins, and she readily agreed. Happy dance!!

I'd tested all my grandma's relatives at 23andMe up until just before the big brouhaha with the FDA shut them down temporarily.When they came back with the medical testing, they also upped the price tag by $50. Being the frugal genealogist that I am, I purchased my cousin's test at FTDNA and waited. 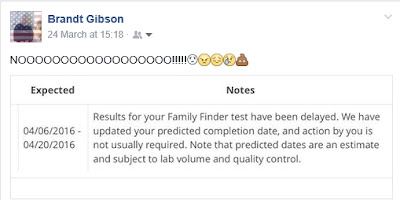 I tried to tell myself that I'd waited years for these results, so a few more weeks wouldn't kill me. But I still checked the website every day at least once or twice, hoping that I'd be able to see the results before the end of April. Turns out, I didn't have to wait for April to even start. They came in last night sometime around 11:30!

So now, without further ado - the results! My grandmother and her cousin share about 9.5% of their DNA. 23andMe says the range for first cousins that share both grandparents on one side is 7.31% - 13.8%. If Edna had not been the daughter of Ernest Craddock, the shared DNA would have been the same as for second cousins, between 2.85% - 5.04%. Therefore, it seems that Edna was, without a doubt, the daughter of Ernest Craddock. Problem solved at very long last!

I'm not done waiting for DNA results, however. The last DNA sample I set out to collect when I started all this madness back in 2012 is still in process - the Y-DNA test for my Wagner line. I had originally intended to test my grandma Blossom's brother Howie, but he was pretty ill at the time and I was advised to not broach the subject with him. Sadly, he passed away before I ever got the chance to really talk to him about it. Fortunately, one of his sons was willing to swab for me, and his DNA test went to the lab right around the same time as the test for my grandma's cousin. My Wagner Y-DNA results should be done around the middle/end of April, so that gives me just enough time to play around with these autosomal results I just got and get familiar with them. Once I have the Y-DNA results I need, my plan is to organize all my DNA tests and really begin working the research and collecting results, analyzing them and plumbing them for info and clues. Sound like fun? You better believe it!!
Posted by ironhide781 at 1:50 PM

You certainly must have the patience of Job. Don't think I could do that. Love reading all about what you find.