As I was wrapping up my post about Frances Alvira Brennan yesterday, I went looking for a little more information on Frances' parents and siblings. I found that her father, David D. Brennan, was a World War I veteran, having served as a medical officer in France from 1918-1919. I also found that he and his wife Clara Bergstad had several more children besides Ellen, Betty, and Frances. There were also Thelma, Violet Mae, Daniel, and Ida. Crazy that out of seven total children, only one was a boy.

﻿
David died in 1968, and was buried in Belfield Lutheran Cemetery in Belfield, North Dakota. I searched Findagrave.com to see if any other Brennans were buried there, and found David's wife Clara and daughter Violet. Violet's record stuck out because she was only 20 at the time of her death in 1954. I thought there had to be a story there, so I went looking. I soon found her death record, but from an unusual place - Washington state. How did she die in Washington when the rest of her family was in North Dakota?

I figured the best way to find out the rest of the story (if it could be found) would be in digitized newspapers, so I hit up Newspaper Archive (which I have a free subscription to thanks to my local library). I soon found what I was looking for: a death announcement from November 9, 1954. 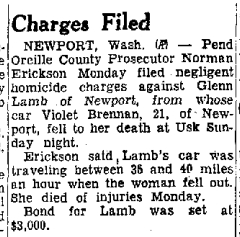 The article said Violet (who was apparently living in Washington state at the time) fell out of a vehicle being driven by a Glenn Lamb, and that Lamb was subsequently charged with negligent homicide. That phrase really jumped out - negligent homicide. Glenn wasn't charged with outright murder, but it wasn't manslaughter either. The car was moving at 30-40 miles an hour when she "fell out". I thought there had to have been more going on, so I kept searching. Soon I found another article from a Spokane newspaper dated November 8, the day Violet died. It gave a little more information.
The additional information in this article was this - that Glenn Lamb and Violet Brennan had (according to an eyewitness) been having an argument and Violet had fallen out of the car during the argument. I don't know anyone who was sitting on the front porch of a café (like the eyewitness was) and watching cars go by (which he must have been) could have known there was an argument between two people in a car going 30-40 miles an hour, unless there was something very obvious about that argument. And for Violet to "fall out" of the car during an argument suggests that, unless something really unusual was going on, she fell out because of something the driver did - maybe a punch, slap, push, or wild swerve? At any rate, it seems that things got out of control, and as a result, Violet lost her life.
It was really heartbreaking to discover a second tragedy to hit David and Clara's family (third if you count the house fire and Frances' death as separate). I wonder how they coped with the losses. I'm also curious to find out what happened to Glenn Lamb, and see whether he was convicted on the charges of negligent homicide. Maybe on my next trip out to Spokane I'll head up to the Pend Oreille county courthouse and see if I can find out. I'd kind of like to know what happened to the rest of the Brennan kids, just to see if any of them had a happy ending. I sure hope they did.
﻿
Posted by ironhide781 at 6:00 AM

Now how are the Brennan's related to us? I get so confused!!

Your dad's aunt Clara married David Brennan. David and Clara were the parents of Frances and Violet, the cousins I wrote about in these posts.