Why I am a bad genealogist

I first got into genealogy research back in 2000, when I started school at BYU. My grandma had sent me a pedigree chart of her ancestors while I was on my mission in Japan, and I had been excited to get into researching my family history and see what I could find. My first find came way too easily, but I'm glad it did. I went looking for my great-grandfather, John Frederick Gibson. I didn't know when he was born, but I was told it was around 1880, that he had been born in the city of Saint John in New Brunswick, and his parents were John and Catherine Gibson. I went to the Family History Center at BYU (the largest in the world by the way, next to the FHL itself in Salt Lake), pulled out the microfilm for the 1881 census for Saint John, and started rolling my way through it, page by page. It didn't take long before I found John and Catherine Gibson, with a 1-year-old daughter named Annie. I excitedly called my family and said "I found them!" From that moment on, I was hooked. I soon started pulling up everything I could find on every relative and ancestor I knew about. But more than anything, I wanted to know one thing about my Gibsons in particular - where in Ireland did they come from?

Since that very cold day in January 2000, I have found a lot of info on John's later life and descendants, but nothing about his earlier life or ancestry. I found a census record in 1871 that might be him, if he only aged 3 years between 1871 and 1881 (or the informant got his age completely wrong on either census, or both of them even). John said in later documents that his parents were both born in Ireland, but I had no concrete proof of who his parents were. Since I couldn't trace my Gibsons back to their origins in Ireland, I've also tried tracing my other Irish line back to Ireland - that of John Gibson's wife, Catherine Cain.

Two years ago, I met a cousin of my grandpa Fred Gibson through Ancestry.com, one who descended from Dennis and Catherine Cain (or Kane as it was spelled in America). This cousin said that they were told by an old relative that Dennis's parents (names unknown) had died in Ireland of the black lung, and that Dennis had immigrated to Canada to live with an unnamed aunt on his father's side. The cousin didn't know (or at least didn't say) where this older relative had obtained this information, so I read the information she had on Dennis in her Ancestry tree and wrote it down in my Rootsmagic database, and moved on.

That is why I'm a bad genealogist. The info that this cousin had on Dennis included a transcription of his obituary, taken from the Helena Independent Record the day after his death in May 1906. Because I couldn't find a copy of that original obituary to verify its contents, I just copied the transcript from Ancestry, and promptly (and stupidly) forgot about it. I say stupidly, because the obituary contains this sentence: He was born in Strabane, County Tyrone, Ireland and in 1833 crossed the water, locating in St. John's, New Brunswick.

The holy grail of my genealogy research - a connection to a specific point of origin in Ireland - has been sitting in my Rootsmagic database for almost two years now. Completely untouched. The only reason I came across it today was I happened to be poking around Newspaper Archive looking for an obituary for - Dennis Kane. And I found one - a copy of the one from the Helena paper, reprinted in the Anaconda Standard the next day. And guess what? The wording is almost identical to what my cousin had in her Ancestry tree. 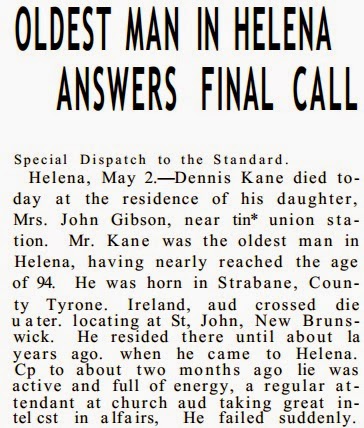 I have spent﻿ every spare moment today joining every County Tyrone group on Facebook I could find, plus a mailing list for Tyrone, and bouncing around various websites that members in these Facebook groups have been kind enough to point me to. I'm grateful that I have this information, but kicking myself that I didn't act on it two years ago when I first came across it. Who knows what progress I'd have made in the last 20 months? All I can do now is try to make up for lost time, and hope that whatever answers might have been out there 20 months ago are still there, waiting for this (now formerly) bad genealogist to find them.

Yeah, I always feel a little foolish when I find that I already information I spent inordinate amounts of time looking for. I once spent over a month looking for a great-great-grandmother's obituary only to realize my great aunt had given it to me years earlier, and that it did not contain the information I was looking for anyway. Sad really.

I think all genealogists have lost, misplaced, or forgotten some key piece of data only to research again later.