It's been a long time since my last Genes Day update, but I've got a lot to show for it. First up, new test results! A Joseph cousin of mine agreed to test, as long as I would help interpret the results and assist with finding and connecting with new relatives. Talk about an offer I can't refuse! One of the first things I checked out was his Y-DNA results, as I was eager to find out what haplogroup my Joseph male ancestors belonged to. It turns out, my Joseph line belongs to haplogroup N1C1*, or M178 (the terminal SNP). I conferred with members of the DNA Newbie mailing list I'm on, as well as checking ISOGG's website, and it appears that, for now at least, there are no SNPs downstream from M178, so that's as detailed as I can get at this time. National Geographic's Geno 2.0 test might shed some more light, but for now, I know enough to make me happy. 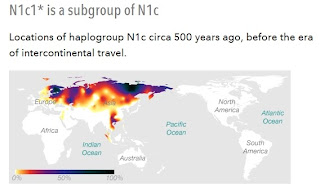 According to 23andMe, this haplogroup is most highly concentrated in Siberians, Finns, Estonians, and the Saami people of Scandinavia. Obviously, this could just be the LONG range ancestry of my Joseph line, but I can't help but wonder if it holds any meaning for my research in a genealogical time frame. I've traced my Joseph line back to Christian Joseph, born about 1815 in Poland. Were his ancestors Russian or Scandinavian? Once I find someone willing to transcribe and translate Polish records for me, I'll get back on the research for that line and see what I can find.

Also, I heard back from one of my mom's closest matches, and we were able to determine our common ancestors! It turns out we're double cousins, as her great-grandparents, Henry Hammer and Mary McDonald, were siblings of my mom's great-grandparents, Thomas Hammer and Katherine McDonald. This is exciting because I'm starting to work on chromosome mapping, mapping out which ancestor or ancestral couple each part of DNA comes from. I've started this on the tests taken by my three grandparents, my mom, and a couple of the cousins who've tested for me. It's tricky, and not a little complicated, but I'm really interested in this - this is one of the big things I'd hoped to be able to do when I started doing genetic genealogy. Maybe I'll do two separate versions, one with the names of the ancestors, and one with locations of where those ancestors lived. We'll see.

That's some heritage found. Now for what I lost. I've written previously (here , here, and here) about my difficulty in figuring out why my grandma's DNA test showed no Native American DNA. I now have the answer, and it's not at all what I was expecting.

To help figure out why my grandma was showing no Native American DNA, I tested a child of one of her siblings. The results came back - this relative also had no Native American DNA, but also showed only half as much DNA in common with my grandma as they should for their predicted relationship. There had been a longstanding story that this sibling of my grandma's had a different father than my grandma did, and the DNA test results confirmed that. Unfortunately, neither my grandma nor her relative showed any Native DNA. I started to wonder whether the "Indian" ancestor was really Indian after all. Her name was Lisette Rainier, a French name, and part of me wondered if she weren't simply considered and treated Indian, while not actually being of Indian descent.

To test this theory, I tested two of my grandma's paternal cousins, both descendants of Tom Harris and his wife Lisette. They came back sharing just the right amount of common DNA, confirming their relationship to each other. They also showed Indian DNA, each having the correct percentages of Indian DNA for having a full-blooded Indian ancestor at the same generation as Lisette. But the real surprise - they had no DNA in common with my grandma or her sibling's child. None. I thought about this for a while, trying to figure out how these two relatives, whose descent from Tom and Lisette I had documented carefully, who shared the right amount of DNA with each other, and both had Indian DNA, could both come up as unrelated to both my grandma and her sibling's child. Then it hit me - neither my grandma nor her sibling were children of my great-grandma's husband. I later confirmed this when I was contacted by another Tom and Lisette Harris descendant who had tested at 23andMe. He matched his two cousins for just the right amount of DNA and also had the right percentage of Indian DNA, and still had no DNA in common with my grandma or her sibling's child.

This was very unexpected, to say the least. I never imagined finding anything like this, not in a million years. I had my grandma take this DNA test originally to help find out more about our Indian ancestry. I felt like I'd stolen something from my grandmother; she'd always taken such pride in her Indian heritage, had worked for years to find all she could about Lisette, and now I had to tell her that we aren't actually Lisette's descendants. Not only that, but now we knew that the man who helped raise her was not her biological father. She took the news very admirably, and agreed to help me in trying to find out who her biological father was.

I don't have any negative feelings towards my great-grandma about this, and neither do my mom and grandma from what they've told me. I know my great-grandma loved her family, loved her kids, grandkids, and great-grandkids as much as she could. Whatever happened, that much stood out about her above all else. No information I found on who the biological fathers of her children were can or will ever change that.

Stay tuned for part 2, where I document how I found the identity of my grandma's biological father.

Just read your blog Brandt.. enjoyed it very much and I am glad you have found more on the Vadnais parentage. So sad these things happen I, like you have lost most interest in the Harris Genealogy. Guess my main interest now would only be the Craddocks and the Beilsteins which I had done a lot on years ago. Kinda like a guy with only one arm, you just keep going and use the one you know you have. The other one is still there if it is artificial but it does not make up for the real one you lost. Still I am happy to know who was my paternal father unlike Bettye thus far.

I wrote a comment and then I do not see it so here goes again.. Great Work Brandt. Like you, I lost all interest in the Harris genealogy but have done a lot in the past on the Craddock and Beilstein families so I am happy about that. I am disappointed that my mother never told Bettye even though Bettye always had this sixth sense she was not a Harris. The big surprise was that neither was I! IT is like losing a limb and caring on with a new prosthesis... it helps to know it is there but is not the same as the real one would have been.
We just do not know the reasons men and women do these things but my mother was a very weak and timid and beaten down woman most of her life so I can understand her life better than most and do not hold any animosity toward her at all.