I recently discovered some amazing family history information thanks to FamilySearch's Norway Genealogy Research Community on Facebook. How I didn't know that there were these communities on Facebook is beyond me, but I'm so glad I know about them now.

As I've written about before, my cousin Delores Olson sent me a whole bunch of documents about and pictures of my Bergstad relatives and ancestors. One of those was a page from a family Bible, with names and birth dates of my 2nd-great-grandfather Knut J. Bergstad and his siblings in Wisconsin, but all written in Norwegian. I could make out the names and dates, but couldn't read some of the other words written on the page, and posted the image on the research community's wall. Here's what it looks like, with my ancestor's name marked with a red star. 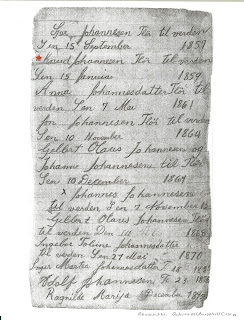 A short while later, I had a couple responses confirming my reading of the names and dates, and that the extra language meant "came into the world on". They also helped me find them in the 1860 and 1870 US Federal censuses, which I'd previously been unable to do (mostly because until recently, I didn't know that they hadn't been using Bergstad as the family surname until after 1870). But then they went one step further. One of the posters had gone to the Norwegian Digital Archives website (in a lot of ways the the be-all and end-all site for Norwegian research) and using the info I provided, found the birth record of my 3rd-great-grandfather Johannes Sjursen Bergstad (father of all those in the Bible page), all of his siblings I knew about, the marriage of his parents Sjur Johanneson Bergstad and Anna Johnsdatter Horvei, Sjur's baptism record, and the immigration record of Sjur and Anna's family leaving Norway in 1847!! Talk about doing the genealogy happy dance!! I'd had some info for these people for years, but no original documentation to back it up. Suddenly I had all kinds of original records!

As I started going through the records and entering them into my database, I noticed something. While going through the list of family members that immigrated in 1847, there was a name that I didn't recognize in between my Johannes Sjursen (my 3rd-great-grandfather) and John Sjursen (his next oldest sibling). It looked like there was another child in between Johannes and John! 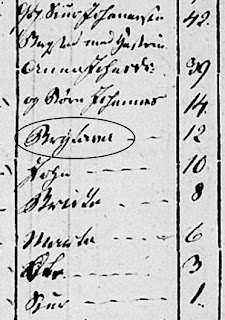 Since I had the links to John's and Johannes' birth records, and any child born between Johannes and John should be listed in the same parish register, I decided to just start going through, page by page, and see if I couldn't find this mystery child. After one hour of searching, I found her!

I'm still not very familiar with Norwegian handwriting, so I couldn't quite read the name. It looked like it might be Regtteve or Brytteve but I'd never heard of either of those names. I asked the Norway community page again, and went Google searching. Eventually I hit on this website called Nordic Names. I tried searching for a few variations of the mystery name until I found one that looked just right - Brytteva. It also said the name is local to Hordaland county, exactly where my ancestors are from! The Norway research group confirmed my guess that the name is in fact Brytteve. So my ancestor had a younger sister named Brytteve or Brytteva, who lived at least long enough to make the journey to wonder if I can find her in any American census or vital records? That's a question that'll have to wait for another day.
Once I had the names all figured out, I went to Ancestry.com to see if I could find a passenger list record for them arriving Stateside. It didn't take long before I found that they arrived at the port of New York on 30 June 1847 on the ship Albion.

At first I thought this meant they came through Castle Garden, but it turns out Castle Garden didn't accept immigrants until 1855, 8 years after my ancestors had already landed. So I'll have to find out how the port of New York was ﻿situated in 1847 to find out what it was like when they landed.
This makes the third set of ancestors that I now have immigration records on, the others being my 2nd-great-grandfather Samuel Joseph and his family, and my great-grandmother Rose Sitzman/Zitzmann and her mom, sister, and aunts and uncles. It's amazing to be able to say I know exactly when these branches of my family arrived in this country. These records are so fascinating!
Posted by ironhide781 at 6:54 PM

So we are pretty recent immigrants, huh. I always thought we’d been here for centuries and now that you’ve discovered we have no Native American Indian ancestors we’re late comers! Hummmm….

Yeah, sorry to burst your bubble there. But I still think it's amazing to be able to say I know the exact day that this branch of my family came to this country.