After the interesting time I had trying to corroborate the African segment in my grandma's DNA on other admixture tools, I wanted to do the same with grandpa's and see what the tools had to say. I should note here that some of the admixture tools found African DNA on other chromosomes (which you'll see in some of the screenshots below), but for this blog post I'm sticking with just the solitary African segment 23andMe found. 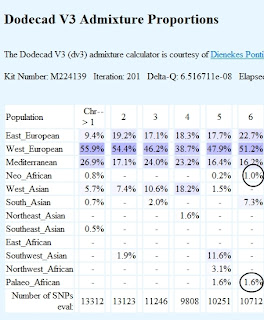 So the numbers and graph matched 2 for 3 on this one. Next, let's look at Eurogenes. This tool only has one type of African DNA, labeled West African. Grandpa has a pretty good chunk of it, as you can see here.

﻿
The numbers breakdown for Eurogenes said grandpa's chromosome 6 is 2.3% West African. That's pretty close to the 2.6% Dodecad gave me. 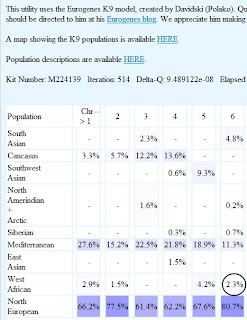 So this test shows African DNA in both the graph and numbers. Looking good so far! Now to look at the HarappaWorld admixture tool. HarappaWorld has four African populations - San, East African, Pygmy, and West African. I don't see any San in the graph, but I do see the other three represented. West African shows up the most, followed by East African, with a little bit of Pygmy in between. 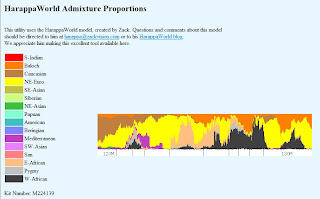 When I turn to the numbers, East African doesn't show up at all, yet Pygmy does at .3%. West African dominates at 2.1%, for a total of 2.4% African DNA on this chromosome. That fits in nicely with the 2.3% and 2.6% from the other two. So the graph has three hits, but the numbers only have two. Still, this is looking pretty consistent. 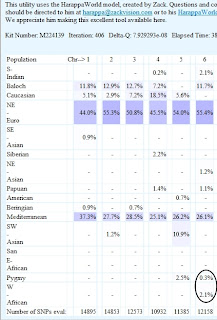 Finally, let's look at MDLP's admixture tool. MDLP has three African populations - Pygmy, South African, and Sub-Saharian. There are little tiny bits of Pygmy DNA a little after the 120M mark, but much more past the 130M mark, so that's a hit. The South African and Sub-Saharian segments are much larger, so grandpa scores positive for all three types of African DNA in this test.

Looking at the numbers for this tool, grandpa has hits in all three populations. On this chromosome, he's got 0.9% Pygmy, 1% South African, and 0.1% Sub-Saharian. That puts his total African DNA on this chromosome at 2.1%, pretty close to the other three. Personally, I think the graph shows Sub-Saharian as the largest of the three, but I think the tool uses different functions or algorithms to print the graph and the numbers breakdown. Either way, the graph shows hits in three African populations, and the numbers match that. 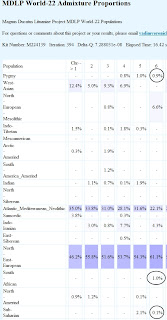 ﻿
So what does this all boil down to? Between the five DNA analysis tools, all five of them showed African DNA at the same spot on chromosome 6. The graphs on all five tools showed the African DNA, and the percentage breakdowns all verified it as well, though in two cases, populations represented on the graphs did not appear in the numbers. The amount of African DNA varied slightly between tools, with a low of 2.1% and a high of 3.1%. But basically they all told the same story - that my grandpa has a little chunk of DNA that they all believe came from Africa.

So far, that's two different ancestral lines with African DNA in them, both probably very remote, but still there. Amazing to think of the places that little bit of DNA has been, and where it came from originally. I wonder if I still carry it, whether my kids carry it? It'd be a shame for its millenia-long journey to end here. But at least I can let my descendants know it was there.
Posted by ironhide781 at 6:44 PM