Good news - I'm almost finished going through my Joseph records! I have some more church records to go through (and found some interesting stuff that I'll post about soon). But while taking a breather after sorting through a bunch of stuff, I started looking at this picture to the left. I found it while going through my grandpa's papers last year, and he said he didn't recognize it, though I didn't have a lot of time to analyze it with him then, and haven't gone back to it since.

But as I looked at the people in it, I recognized the lady in the bottom right. She also appears in a photo of my great-great-grandfather Samuel Joseph and his kids (the photo on the right).  I pasted both faces in Paint.net (a fantastic and free photo manipulation program) and compared them - to me, they were a perfect match. When I first saw her in the group shot of Sam and his kids, I guessed that she was Lydia (Joseph) Reitnauer, the one child of Sam's my grandpa never knew personally. Now, seeing her in another photo in my grandpa's possession, I am fairly convinced of it.

Then I started looking at the woman seated next to Lydia in the mystery photo. The more I looked, the more I thought I recognized the face of my great-grandmother Augusta (Joseph) Gibson. I compared her with the photos I already had of her - the big family photo taken at Tina Leistiko's wedding to John Levick (the big photo at the top of my blog), and the group shot of Sam and the kids. When I put the photos side by side, it seemed clear to me that this was indeed my great-grandmother.

Which leads me to the men in the picture. Offhand, neither I nor my grandparents recognized either of them. But given the fact that the women were my great-grandmother and her sister, it stood to reason that these might be their husbands, especially since one of them had his hand on the shoulder of my great-grandmother. I dug into my digital photo albums and pulled out some of the photos of my great-grandfather, Frederick John Gibson, and compared them to the mystery man on the right. 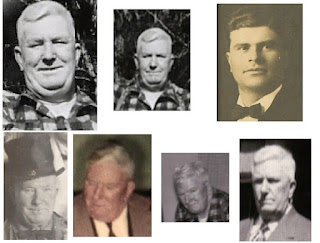 I noticed some similarities between these photos and the mystery man, especially around the mouth and nose. While doing the comparisons, one picture really stood out - the top left photo of my little collage there. ﻿

I looked at the shape of his chin, and especially the right ear. The hairline seemed pretty consistent too. The eyes were a bit different, but given that there's a difference of about 40 years between the two pictures, there's bound to be some changes in a man's appearance. It's not a 100% clear-cut resemblance, but there are enough similarities that I feel pretty confident that this is my great-grandfather as a young(er) man (he was 39 when he married Augusta).

The only problem I know of in identifying this as my great-grandfather is timing of the photo. My great-grandparents married in 1923, and my great-grandmother died in 1931, so the photo would have to date sometime between then. But Lydia and Jacob Reitnauer moved from Montana to South Dakota in 1913. Not that either couple couldn't have come over to visit the other and posed for a picture while there. They appear to be in a studio of some kind - nice rug on the ground, completely dark background. But there's no studio name printed on the photo, and no identifying info was written on the back. Plus Augusta's first husband, Charles Steffan (or Steffan), and Jacob Reitnauer were probably friends, as Jacob was Charles' best man at his wedding to Augusta. So I admit it could be Charles in the photo. However, aside from the resemblances to my great-grandfather and possible timing issues, this does look like a wedding photo. That's an event out of town family would come to visit for, and pose for pictures for. Also, Jacob and Lydia didn't marry until August 1911, over a year after Augusta and Charles. It wouldn't really make sense for them to be together with Charles and Augusta in a photo like this, unless maybe they were engaged already (did people stay engaged for over a year in 1910 before marrying?). Beyond all that though, something instinctive just tells me it's my great-grandfather, not Charles. So I'm gonna go with that.

As for the other gentleman, I'm going to say that he's Jacob Reitnauer. Since Augusta and Lydia are both in there, and Augusta's husband is behind Lydia, it makes sense that Lydia's husband would be behind Augusta. If this is the case, this is the first time I've seen a picture of him.
Posted by ironhide781 at 6:00 AM

You need one of those age progression programs like they use for missing children. The younger picture has a lot of similarities to Jeff ... look at the eyebrows. What do you think?

I think a program like that would be VERY helpful! And you're right, he does look a lot like Jeff. Maybe that's why I'm so convinced he's Papa Fred's dad.