A couple months ago, I decided to splurge and purchased a couple of records from the Manitoba Vital Records Agency. At $12 a pop, it's not often I can do this, but I'd been wanting those records for quite some time, so I finally cracked and ordered them. They arrived this week, and I'm very glad I ordered them!

Let's start with the death record for Juliana (Kublick) Lorenz. She was the daughter of Gottlieb Kublick and Christine Klein, and my great-great-grandfather Samuel Joseph's second wife. She couldn't have been married to him for too long, as my grandpa remembers Sam (and only Sam) living with him around 1930, and Sam and Juliana were married in 1913. The death record doesn't actually give Juliana's first name - it says her first name was 'not known' - but I could tell it was her because of other details -
1. It gives her surname as Lorntz-Joseph. When she married my ancestor, she gave her last name as Lorentz, so the surname on the death certificate made sense. Not only that, the death certificate says she was married three times - no surname was given for her first marriage, and her maiden name is listed as unknown, but the surnames for her second  and third marriages are listed as Lortnz and Joseph respectively.
2. Her date of birth in the death certificate is July 1852 (with the word 'about' written in above the year). That's reasonably close to the calculated birth year of 1859 from her marriage record.
3. Her nationality is given as German, which makes sense given that she was married in a German Lutheran church, whose records were kept mostly in German.
4. Her death certificate says she'd been living in Manitoba for approximately 20 years, which equals out to the year she married Sam Joseph.

The death certificate also lists some things which (if they are accurate) I didn't know about her. Of course, her death date of 6 January 1933 was new info, as was the cause of death - cerebral apoplexy, which it says lasted two days. If the Wikipedia definition is correct, that means she died of a brain hemorrhage. Yikes. The death cert also says her place of birth was "Lublanc, Poland." Oddly enough, the place name was written in twice, once on the line, and once more in smaller letters, above it. Maybe someone who knows Canadian records better would be able to explain why they would do that, because to me, it makes no sense to write the same name in twice. The death place and residence were identical, so it sounds like she died at home.

The saddest part of the record was the info given in the occupation field. It gives her occupation as none, but for 'kind of industry' it says "Indigent." Just seeing that one word changed how I saw the whole death record. It made me see Juliana as this elder lady, living in poverty, who died at home of a brain hemorrhage, and couldn't even be fully identified for her own death certificate. What changed between her and Sam from the time they were married in 1913 to her death alone and impoverished in 1933? I still know so little about her, and not knowing Canadian records that well, it may be a time to begin learning them so I can discover her story. 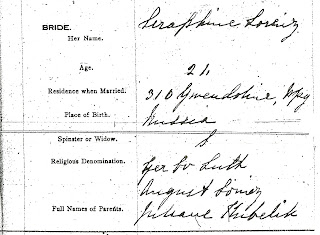 Though actually, the other record I ordered did give me a bit more of her story already, more than I thought it would. This was the marriage record for Sam's younger brother Ludwig Joseph (who also went by Louis). Ludwig's wife was listed on the Manitoba Vital Records Agency website as Seraphine Lorenz, and when I ordered the record, I hoped that somehow the marriage record would show a connection between Seraphine and Juliana. As it turned out, it did. The marriage record made by Manitoba lists a lot of info about the couple - name, age, residence, marital status, religion, and - names of parents. Seraphine's parents were August Lorenz and Juliane Kubelik.

This I had not expected. I'd thought that maybe they were sisters, or related in some other way. I never thought that Ludwig had actually married the daughter of his brother's wife. Given that Ludwig and Seraphine got married first, it may be that Sam met Juliana because of his brother's wedding. It also leads to an interesting thought - that the baby that Ludwig and Seraphine had in 1918, a girl they named Adeline, was not only Sam's niece, she was also his step-granddaughter. How's that for a dual relationship? Sam wasn't quite his own grandpa, but not everyone can accurately claim to be a (step) grandparent to their niece!

All in all, it was totally worth the expense to learn all this about the Josephs. I have at least a little more information on Juliana, her first marriage to August Lorenz, and her unfortunate end. Now I just need to start filling in the gaps in between. I've already got at least one more lead on her - I just learned tonight she was buried in the same cemetery as many of my other Joseph relatives. I've written the church, so we'll see if they have any additional light they can shed on this still somewhat mysterious relative, and whether I can learn enough about Manitoba records to dig up some info on my own.
Posted by ironhide781 at 1:02 AM

I'm not even related (blood wise) to the Joseph's but that story is so sad. When I hear how good it was in the 'good old days', I'm not so sure about that. It seems that we are so much more compassionate about people and life it's self now. At least in my circles .... we need to get her work done! Sign me up!!

I couldn't thank you enough for posting this story which gives me lots of info about MY relatives that include Juliana Kubelik. My grandmother was Augusta Lorentz and she was married two weeks before Seraphina, and her marriage certificate shows the same parents names. (Thanks for posting that) I never spoke with my grandmother as she spoke only German . . . and I've been working hard to solve the mystery of my genealogy. Again thanks; your story was great.

Wow, you're descended from Juliana? I would love to compare notes and learn more about her family and history.

I'd be happy to do that. I have some photos of Juliana's daughter and HER daughter who is/was my mother. So . . . I have that sort of information, but I am just developing that thread as I got one of the Manitoba marriage certificates (for my grandmother) just yesterday. Crazy enough, same handwriting, two weeks earlier, with Seraphine in attendance at the wedding. It was the first I had heard of Seraphine, but oddly, the same parents!! So, I'm learning. I live in Montana

Would you email me? My email is brandtgibson78 at hotmail dot com. I have an online family tree I can point you to that has all the information on this line that I've uncovered so far.