﻿﻿﻿My great-great-grandmother and her two little girls were deported from Ellis Island.

But before I get into that story, first let me give you some background. Ever since I started tracing my family's history back in 2000, there have been two lines that were the hardest to find concrete details on - the Josephs (my paternal grandfather's mother's side), and the Sitzmans (my paternal grandmother's mother's side). Within the last year or so, as I've blogged on here many times, I've had a lot of success (both in my own research, and in genealogical serendipity) in breaking through the Joseph brick wall. I now know much more about the Josephs than I thought I ever would, and I still have several leads I need to follow up on when I have time. But then my grandmother requested that I come over and talk about her side of the family, which pulled me away from the Josephs, and got me looking at her Wagner and Sitzman lines. 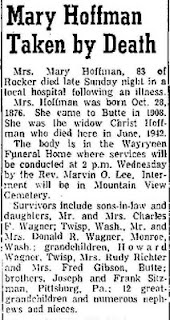 As I started going through my Sitzman records, I realized I still didn't know very much about Mary Sitzman, my great-great-grandmother. Her daughter Rose, my great-grandmother, once told my mom that Grandma Hoffman (as my great-great-grandmother was known) had come over pretending to be the wife of one of her brothers so he could sponsor her passage. She came over and used her maiden name, which she also gave to her girls, which led us to suspect she might have been running from her husband, but that was just a theory. We knew she was German, that she and her girls had come over around the turn of the century, and that Grandma Hoffman was very tight-lipped about the 'old country'. She didn't want her girls speaking German, and she said nothing about her life or family back in Europe. I knew of several siblings - Frank, Mike, Joe, Barbara, and Rose - via my grandmother, but grandma didn't know any concrete dates or events, though she did know some stories about them, and even had a few pictures of them. But no records from that line have come down, and without solid info to go off of for any of Mary's siblings, finding records on them was nigh impossible.  For Grandma Hoffman herself, I had her death certificate, a few census records, and an obituary, plus a lot of photos. I hadn't really found anything or seen anything in those records that jumped out at me with any real clues to where she was really from. So while I could trace her life from 1910 (the first census record she appears in) to her death in 1960, I didn't know of any leads that could tell me where she came from. Her death record and a census record said Germany, two other censuses said Bohemia, wherever that was, and the obituary was silent on the issue. Not much to go on.

The first break came when I was going through old newspapers online, and started finding some obituaries. The first one I found was for Christ Hoffman, who died in 1942. The obit for Christ Hoffman confirmed the names of some of Mary's siblings, namely Rose, Frank and Joseph, but it also named additional siblings - Fred Rhump and Sebastian Sitzman, both from Butte, Montana, and Carrie Morgele from Pittsburgh. I also found an obituary for Barbara, which listed most of the siblings I knew about, both from my grandma and from the other obits - sisters Rose (Mrs. William Fredrickson), Mary (Mrs. Chris Hoffman), and Carrie Magual, and brothers Frank, Joe and Sebastian. There was still no mention of Mike Sitzman, but I got really excited at finding all these names anyways, and started making a list of all these siblings to run past my grandmother.

When I visited my grandmother last week, I showed her the list of Sitzman siblings I'd put 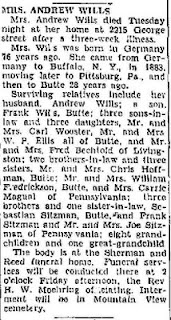 together. She recognized Joe, Frank, Rose, and Barbara, of course. She was puzzled at Sebastian, who in one of the obits was said to be from Dewey, Montana, which is where Grandma remembered Mike being from. She concluded that Mike and Sebastian were the same person, given that the name Mike never appeared in any of the records I'd found, though Sebastian did (I'd also found him in a city directory, newspaper articles, and census records). I've found other cases in my family where a person went by a name that had nothing to do with their actual names (my grandfather Roland John Bergstad went by Tom; my great-granduncle Donald Roscoe Wagner went by Bill; and my great-grandaunt Mary (Sitzman) Wagner was called Susie by her daughter). So Sebastian and Mike being the same person made sense. And honestly, I felt a little relieved that it wasn't another relative somehow managing to stay out of all major record sources! Grandma had never heard of Carrie, nor either of the last names she was given in the obits (Morgele and Magual), nor yet of Frank Rhump. I still know nothing more about Carrie and Frank than what's wirtten in the obits, so I still have work to do on them. But I was finally starting to feel like I had a handle on who my great-great-grandmother's siblings were.

The second big break came with what I discovered once I found Mary Sitzman and Christ Hoffman's marriage record. But that story will have to wait until next time.
Posted by ironhide781 at 12:04 AM

Thank you for sharing your story. I found it interesting that your great, great grandmother did not talk about Germany once she came to the U.S. I, too, have a line of tight-lipped immigrants to the U.S., so you have given me hope that I might have some breakthroughs as well.