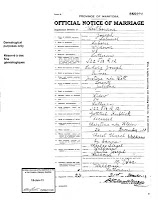 I got the civil record for Sam Joseph's marriage to Juliana Lorentz! It came a while ago, but I've been too swamped to blog about until now. But this record definitely identifies the groom as my great-great-grandfather, Samuel Joseph, son of Ludwig Joseph and Justine (Witt) Joseph. His marital status is widower, which he had been for four years by that point, his age puts him born about 1865, and religion is Lutheran. It all fits. The most interesting bit of information was his residence, which was listed as S22 T18 R12 in - Manitoba! This was supposedly four years after his move to Montana. When I saw that residence, I remembered that the Tracks of Time book I picked up on eBay had some undated maps of several townships in the Glenella, Manitoba area. I looked them up, and there actually is a map of S22 T18 R12 there! I looked through the map, and found a plot of land owned by none other than Gottlieb Joseph, Sam's brother. Kinda makes me wonder if Sam really lived there, or if he just crashed there to get married. Particularly because his bride gives the same

address.
As for Juliana, the marriage record confirms that she was a widow, so that means Lorentz wasn't her maiden name. It also says her father, Gottlieb Kublick, was deceased, though it gives no information as to where she or her parents were born. I was kind of hoping for birth information to help me locate Juliana in other records, so I guess I'll have to keep searching. I probably just need to sit down and look up what kind of records exist for Manitoba, aside from the census and vital records I already know about.
One avenue I still need to pursue is ordering the death record for Juliana. I'm pretty sure it's her, as the last name is Lorntz-Joseph (no given name listed), born about 1852 (compared to 1859 as given in the marriage records for Juliana), and decedent is female. If that document doesn't pan out, I'm gonna have to do a lot more digging to find more on Juliana.
All in all, the civil copy of the marriage record was worth what I spent - it confirms all the details of the church's version, and gives me the added info regarding Juliana's widowhood (if that's a word). I'll post a follow-up with what info the death record has, and what I think it means for my future research.
Posted by ironhide781 at 1:53 PM

Did these people know how difficult all of their marriages, moving and dying was going to make for you???

Somehow I doubt it ever crossed their minds. :)