On July 30, 2011, my cousin Jimmy Pushard passed away at his home. It was sudden and unexpected, especially since I had been chatting with him on Facebook just a few days before. I was shocked and saddened, as Jimmy was such a wonderful guy, so nice and friendly, always smiling. He'd even emailed me not long before he passed away, and asked me to do some family history research on his Pushard ancestors. It was the first time an extended family member (not a parent or grandparent) had ever asked me to look into their family history, and it was really neat to be able to find info for him and share it with him. 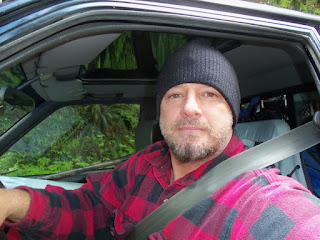 He loved being outdoors, and while most guys build their "mancave" in a basement or garage, his was an actual cave. His wife Danyl passed away back in the 90s, and their son is now married and raising the cutest little boy. I have no doubt Jimmy would be proud of his son and the family he is raising, and would have been the best grandpa to his grandson.
It's hard to believe it's been six years, it still feels like it was more recent than that. Of the more than 20 first cousins I have, Randi, Arianne, and Jimmy are the only ones that have passed away. I haven't lost any aunts, though I have lost one uncle, two grandparents and two great-grandparents. But to have lived almost 40 years, I'd say I've gotten off lucky that my losses only go that far.
Posted by ironhide781 at 5:05 PM

Email ThisBlogThis!Share to TwitterShare to FacebookShare to Pinterest
Labels: Pushard