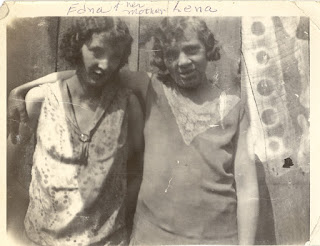 This is a photo of my great-grandmother, Edna Craddock (left) and her mom, Philena (Beilstein) Craddock. I don't have a date on this photo, but if I had to guess, it'd be somewhere between 1925-1930.
Posted by ironhide781 at 1:49 PM No comments:

A long time ago, in a comfy chair far, far away, I began a project - I was going to sort through all the files I've collected since I started doing genealogy, and make sure everything I'd found so far was documented in my genealogy database. I knew I had a lot of files, I'd been doing genealogy for 11 years at that point, but I really had no idea how many of my files I'd actually documented. No idea.

That was on July 21, 2011. Since then I've gone through literally thousands of files - censuses, death records, church records, newspapers, court records, and lots more. I didn't keep track of what was and wasn't documented, because I was more interested in getting done. I still did a little of bit of research and searching here and there, when something I came across intrigued me, or confused me, or shocked me, or I just wanted to know more about that person or family. I felt a huge sense of accomplishment each time I'd get a family folder done. More often than not, it seemed there were many more files that were undocumented than documented, leading me to wonder just what kind of genealogist I've been all these years. But I was happy in that I didn't have to make any huge adjustments to my tree, changing someone's parents or adding a missing child I'd overlooked. I think I've done a pretty good job of pulling information out of the records I've found, even if I didn't document my sources as well in the beginning. Who does, right?

But today, February 18, 2013, I have finally finished The Project!! I have gone through every file, record, and email I've saved in my genealogy folder, and documented where it came from, and who it applies to. Now I can officially say, when I pull up someone in my database, this is everything I have on this person. And what a difference that feeling makes!

I've been doing this for so long, I'm kind of not sure what to do next. I have DNA tests to go back to and analyze further; I would really like to find more info on my Gibson line; and I have a stack of probate records on three of my Bergstad ancestors that need to be scanned and documented and analyzed. Or maybe I'll just bask in the "I'm done" feeling for a day before launching another major project. 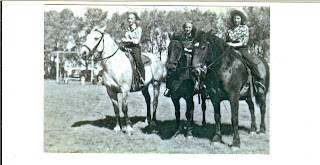 I'm still working my way through my Bergstad files, though I've made a lot of progress the last week or so. As I was wrapping up my review of the non-census documents I've collected, I was looking at the marriage record for Selma Bergstad and B B Hendrixson, when something caught my eye. Her father was listed as Joseph Bergstad. I've had her dad listed as Jon Bergstad for years, and now I started wondering - do I have his name wrong? Have I confused two unrelated families? I decided I had to go back and review all my records on him, and see what I could make of the situation. This is what my review turned up:

That's eight records total. I wasn't able to find Jon/Joe or Gjertina in the 1895 Iowa census, or the federal 1900 and 1910 censuses. I tried tracing Gjertina's family back in time, to see if I could find Jon/Joe living nearby, but alas, no luck there. I don't like that there's a 20 year gap in Jon's life I can't fill yet, but that's what I have at this point.

As far as the records go, Jon/Joe's age is consistent in the records that list an age, always born around 1865. His place of birth is always listed as Wisconsin. The 1894 marriage record has Jon Bergstad married to Gjertina Nesheim, and the 1920 census has Gjertina married to Joseph Bergstad. The 1920 census also says Gjertina was born in Norway and naturalized in 1894, the same year that Gjertina married Jon Bergstad. The marriage records for all three daughters name Gjertina Nesheim as the mother, and Joseph Bergstad as the father. Aside from his first name, all the facts of Jon/Joe's life seem to match each other in the various records. 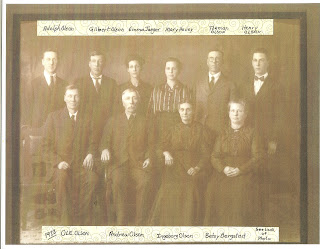 Andrew Olson in the front row is my 3rd-great-grandfather, and Ingeborg next to him is his wife, my 3rd-great-grandmother. The other eight people are all of their children, with Betsy Bergstad on the bottom right being my 2nd-great-grandmother. Their son Clarence was not in the picture. According to my cousin Delores Olson who sent this to me, this photo is from 1922. Thanks to Delores for this photo.
Posted by ironhide781 at 1:57 PM No comments: