When I got started in genealogy, I did what I'm sure a lot of genealogists do when starting out - I collected info everywhere I found it without regard of its source, and dumped it into my tree wholesale. After a couple years, I realized that I had a lot of "stuff" that I had no proof of - whole branches of my tree that were totally unsourced. I've tried to go back and document as much of it as time and circumstance would allow, but there's still a lot of people and events that need proving/disproving. One of those is my Beilstein line.

I've written many times about the tragic story of my 2nd-great-grandmother, Philena Beilstein. But one aspect of her life I haven't really touched on much is the alleged brothers she had. The info I had inherited/collected named three brothers, none of whom survived to adulthood:

While I was working on another project, I came across a statewide index for Illinois death records I hadn't seen before. I had been thinking about the Beilsteins lately, and tried searching it. Imagine my shock when I found an entry for Jacob H Beilstein, with a death date matching what I've had in my files for years! I called the repository the next day, and ordered a copy of the certificate, and it only cost me $1! Wow!! All I have to do now is wait for the record to arrive. It's amazing to me that this person (whose existence I have frankly doubted because I've had no actual record of him) may finally be proven.

So following that success, I went on Ancestry tonight, and thought I'd try my luck again, this time with the first of the three brothers, John Charles. A few minutes' searching, and BOOM - there he was! Except the death record was in Chicago, not Pennsylvania. I found the records were online at FamilySearch, but you had to physically be in a Family History Center to see them. Fortunately for me, there happens to be one literally across the street from where I work. I went over on my lunch break the next day, and got a copy of the certificate. 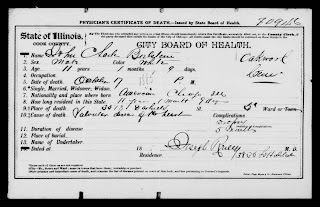 ﻿
The certificate confirmed the death date, corrected the birth date (I was off by a month), but unfortunately did not name his parents or even the informant. So while I'm grateful that I've at least confirmed John Charles' existence, I still can't say for sure he is the son of Jacob and Amelia Beilstein. Perhaps the certificate for Jacob will have the info I need. At least I can hope, right?

That just leaves William to try and find. That will be trickier, as he was born and died before 1878, when the Illinois death records start. If he was born and died in Pennsylvania, those records don't really start until the 1890s. But after finding John and Jacob, I'm not gonna say it's impossible!
Posted by ironhide781 at 2:38 PM 3 comments: