Military Monday - Honoring the servicemen in my family

With today being Memorial Day, people everywhere are honoring the members of our military who gave their lives protecting and defending our country. I am lucky enough to not have lost any family members or direct ancestors (that I know of so far) while in the service of my country, but I do want to take a moment to pay tribute to those in my family who have served in the armed forces. The military is what it is because of the men and women who serve in it, and these men pictured below are all fine examples of what makes America's military the best in the world.

One of the cool things about being a Mormon genealogist is the deal FamilySearch worked out with some of the major players in online genealogy. In exchange for records access, help in digitizing and indexing, and other side benefits, MyHeritage, Ancestry, and FindMyPast offers free access to many of their resources to members of the Church of Jesus Christ of Latter-day Saints. I've worked extensively in Ancestry over the years, and done a little with FindMyPast, but haven't really done much with MyHeritage. After listening to some of the commercials for it in the Extreme Genes podcast, I thought I'd give it a shot.

I uploaded a gedcom of my family tree from my RootsMagic 7 database, and it was ready within just a couple minutes. That's a lot faster than I anticipated! I poked around for a bit, looking at how the tree layout worked, and then had to move on to other things. But over the next couple days, I started getting emails of record matches, and not just a few either. The email I got today listed 20 ancestors with multiple hits each. This was either going to be very promising, or very tedious. I was hoping for the former. So I went in and started looking at some of the record matches.

Interestingly enough, the person at the top of the list was Howard John Sarbu, the husband of my grandma Sally's sister Bettye. I didn't have a lot of info on him, so I started looking through the matches. I noticed that most of the early hits were newspaper articles, which can sometimes be goldmines of information. I read through a few of them, and was very impressed by what I read.

Howard worked as the manager of the Sidney office of the Montana State Employment Service. As such, he was mentioned and quoted in the paper in articles relating to employment outlook, farm worker hiring levels, and other interesting information. The first article I read talked about how he was interviewed regarding farm worker hiring levels being higher in 1962 than they were in 1961 by almost 100%. It must have been interesting work seeing how people were being employed, and satisfying to see more people finding work.

The next article was the one that impressed me. It spoke about how Howard gave a speech at a meeting of the local chapter of the Disabled American Veterans, speaking about the need for disabled veterans to have employment opportunities, and to keep them connected and informed of those opportunities. Howard was himself a veteran, having served as a warrant officer during World War II. Therefore, it seems to me that this was probably not just an occupation for him, but probably a cause with some personal value and connection to him. I find it very admirable that he was such a public advocate for a worthy cause like standing up for disabled veterans.

So far, within only a few minutes of searching MyHeritage, I've found some really interesting family information. I'm excited to see what else turns up on this site, not just in breaking down brick walls (though I hope there is plenty of that!) but putting meat on the bones of my family tree.
Posted by ironhide781 at 6:00 AM 3 comments: 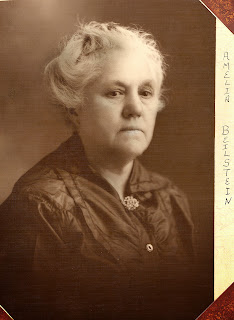 This is my 3rd-great-grandmother, Amelia Waechter. She was a first-generation American, the first child and daughter of German immigrants George Waechter and his wife Margaret (last name unknown). She was born in East Liverpool, Columbiana County, Ohio on June 18, 1854. She married Jacob Beilstein at the ripe old age of 19 in Pennsylvania.

One of my goals is to find where in Europe her parents were from, and to find her mother's maiden name. Her youngest sister, Annie, lived long enough to receive a Social Security Number, and submitted an application and received benefits from the SSA. I've sent for her SS-5, but my application was apparently lost (though they did manage to cash the check somehow). I need to follow up with them on that. She did have 10 siblings, so I could try tracking down more marriage and death records for them as well. Always more to do than I have time to do!
Posted by ironhide781 at 6:00 AM 2 comments: