About five years ago, I found the first Polish records of my Joseph ancestors in microfilms I ordered from the Family History Library in Salt Lake City. I found some amazing information, and new ancestors. And then - I stopped. I ran out of time with the microfilms, and got busy with other things, and the next thing I knew, half a decade slipped by. I always meant to reorder those films, but never got around to it.

Then last year, I made contact with a DNA match who had ancestors from the same part of Poland my Josephs were from, and she had a great-grandmother who was a Joseph (Jozef in Polish)! I dug out my Polish records, dusted them off, and looked for info that matched what she had. There were three births I'd found on those microfilms that looked like they might be of relatives, but I didn't know how they connected, so I just kept them in a folder. Turns out all three of them were siblings to this DNA match's great-grandmother! So I knew her Josephs were as close in place and time to my Josephs as it was possible to get. Yet I still didn't see a connection telling me how they were related. My match said a relative of hers had some documents on this side of her family, and that she'd try to get copies of them to me.

Those copies arrived in my inbox last Saturday. And they solved everything. And started a WHOLE MESS of research and discovery on my Joseph side.

First off, the documents revealed that my match's great-grandmother was the daughter of Michael Jozef, and that Michael was the son of Krystyan Jozef and Eufrozyna Freder. Krystyan (or Christian in German) and Eufrozyna (or Euphrosine in German) are my 4th-great-grandparents!! Their son, Ludwig Heinrich Joseph, is the one who brought his Josephs out of Poland to Volhynia, and then to Canada. So Michael Jozef was Ludwig's younger brother!

I went back to those records from the microfilms, plus the records from my match, and started entering the data into my file. When I was done, I had over a dozen new people in my file! Plus it turns out my match is also descended from Samuel Brehm, who was my 2nd-great-grandfather Samuel Joseph's godfather. Makes me wonder if my Sam was named after hers. WILD!

Once the data was entered, I stepped back to look at the picture it painted. What I found is this:

Christian and Euphrosine Joseph had at least two sons, Ludwig Heinrich, and Michael. Michael and Ludwig married their spouses around the same time, and started having kids at the same time. Ludwig had two right away, Michael had three. There's a gap for both of them before they had any more children (at least I haven't been able to find any kids for those years) but they started having kids again in 1870-1871. Ludwig moved to Volhynia sometime after 1866, while Michael and his family stayed in Kepa Kikolska. Ludwig and his family eventually moved to Manitoba, Canada, while Michael and his descendants stayed in Poland. Michael died in 1908, just a couple years after the last of Ludwig's kids (my ancestor Samuel) left Europe and immigrated to Canada. The branch of Michael's family that my DNA match is part of stayed in Europe until her parents came to Canada in the 40s. By then, it seems likely that the two branches had lost track of each other, and neither family knew the other were in Canada, albeit in different provinces. The two lines lost communication with each other until last year, when the 2nd-great-granddaughter of Michael (my DNA match) and the 3rd-great-grandson of Ludwig (me) found each other through DNA testing - 150 years or so after Michael and Ludwig had parted ways. Wow!

But the coolest part? This was only the beginning of the discoveries.

The copies of the records I'd taken from the microfilms were terrible copies (the family history center I'd used didn't have a working digital camera at the time, so I'd used my cell phone to take a picture of the image on the microfilm reader). I'd gotten them translated, but the dates in the translations didn't match up with the data from my DNA match's records, so I posted my records to a genealogy translation group for additional insight. One of the volunteers there asked why I was posting such terrible copies when scans of the originals were available for free online. WHAT?????? I had no idea there WERE scans, let alone available online for free!

So I went to the link they gave me and started digging around. The website was all in Polish, and I speak and ready exactly no Polish at all. Thanks to Google Translate, I fumbled my way around until I'd kind of figured out how to find what I was looking for - better copies of the records I'd gotten off those microfilms. I found a perfect, full-color scan of Ludwig and Justine's marriage, plus one or two of the birth records for Michael's kids. Now that I had some idea of how to navigate things, I thought I'd try looking for something I've always wanted - Samuel Joseph's birth record. I didn't know if he was born in Poland or Volhynia, though I suspected Volhynia since that's what he'd said on the border crossing records when he moved back and forth between Canada and Montana. But just in case, I went looking for his birth record in Poland.

And I found it. 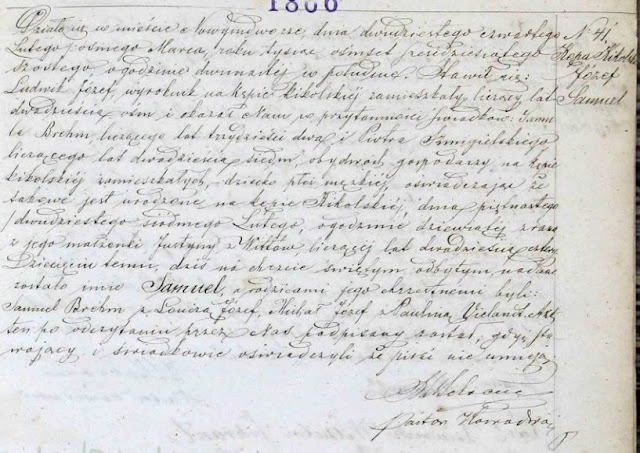 I know you likely can't read this any more than I can. But if you look on the 4th line up from the bottom, you'll see his name - Samuel. I started fist-pumping and happy-dancing all over the place!! Part of the reason is, I have for YEARS wanted something that definitively stated who Samuel's parents were. When I was in ProGen some years back, one of my practice projects was a paper on who Sam's parents were, and I had to lay out all the indirect evidence I had that pointed to and suggested and implicated that Sam was the son of Ludwig and Justine. But here it finally was, the proof in one sweet record. And from Poland at that!!

Having made this discovery, a new idea struck me. A crazy idea. If I'd found Samuel's birth record in this area, and I already had Ludwig's birth and marriage records, what if I went looking for the marriage of Ludwig's parents, Christian and Euphrosine? That could potentially give my all four of Ludwig's grandparents, plus the names of witnesses. Knowing that Ludwig was born in 1837, I went looking for marriages in Kepa Kikolska, the village Ludwig was born in. I found records for 1833, 1835, and 1836, the earliest marriage records available on the site. So I hoped they got married in 1836 and went digging.

And I found it. 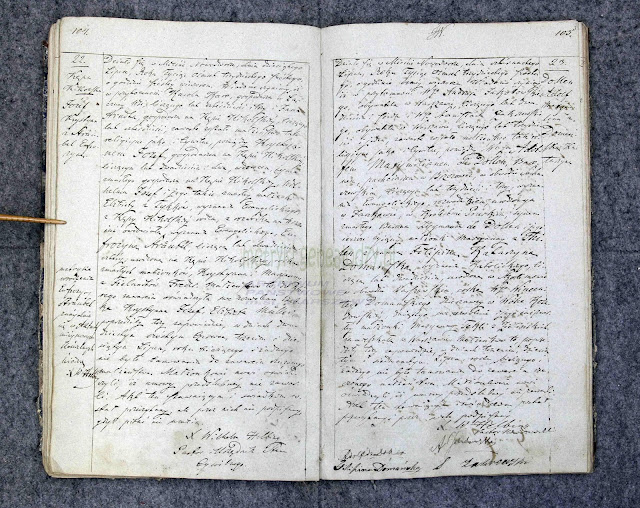 Their record is on the left of the page. The amount of information on this one page is staggering. What I learned from it is this:

Christian Joseph was the son of Wilhelm Joseph and Elzbieta Tyka (probably Elisabetha in German. Tyka is an interesting name too - Michael Joseph's wife's name is Loise Dykau, and makes me wonder if Dykau and Tyka aren't variants of the same name). This is HUGE to me because Christian was born about 1814, and Eufrozyna was born around 1811. That means their parents were all born in the 1700s!! I never imagined I'd be able to take my Joseph line back that far!! By the time of his marriage to Eufrozyna, both of Christian's parents had passed away, and Christian himself, though he was only 22, was a widower. I can't imagine having been through that kind of and amount of loss at such a young age - both parents and a spouse. The information on Christian's wife was no less tragic. She was listed as Eufrozyna Sträubel, daughter of Krystyan Freder and Maryanna Fielandt. Eufrozyna's parents had also both passed away, and although she was only 25, she was a divorcee, though her first husband (guessing it was her first) had died by the time of her marriage to Christian. So both Christian and Eufrozyna had lost both parents and a spouse by their early 20s. Which means Ludwig and Michael never had a chance to know a single grandparent. I can't imagine that kind of world - I was born with three grandparents still living, and as I near my 40s, I still have two of them. Maybe all that loss is what brought them together. Hopefully they were able to strengthen each other and build a happy life together.

The other interesting thing that came out of the marriage record was that, since he was legally still a minor, Christian's marriage needed to be approved by a parent. As his parents were both deceased, a woman named Elżbieta Müller approved of the marriage. One translator said that Elzbieta was Christian's grandmother, the other couldn't read the word. If Elzbieta was his grandmother, I have to wonder whose mother was she - Wilhelm Joseph's or Elzbieta Tyka's? And why didn't she have the same surname as one of them? Did his grandmother also lose a husband and then remarry?

I tried finding death records for Christian and Eufrozyna's parents and former spouses, but death records before 1870 are not available, and may not even exist anymore. So all the questions I have about the rest of their family, who they were and what happened to them, may never be answerable. That's sad, because I really want to know the rest of their story.

At this point, I am just staggered and over the moon by all the information about the Josephs I've come across in the last several days. It looks like the Josephs were in the same area of Poland for at least three generations - Wilhelm, Christian, and Ludwig, maybe four if Hilary is Wilhelm's father. Christian and Eufrozyna both endured a lot of loss, yet hung on, married, and had at least two boys together. Their son Ludwig grew up to raise a large family and traveled thousands of miles with them, while their other son Michael raised a family of his own right where generations of his forebears had lived. Their families have seen much over the last 150 years, and are finally brought back into contact with each other. There's still a lot I want to know - more about the Ludwig's wife's family, and, whether it's possible to find more children and descendants of Wilhelm and Elzbieta. But I'm super grateful and excited about what I've found now, and look forward to sharing my discoveries with my relatives and fellow researchers.
Posted by ironhide781 at 10:53 PM 5 comments: