We're getting close to the end of the Cain family history here. In this installment, we look at the beginnings of Dennis's family. 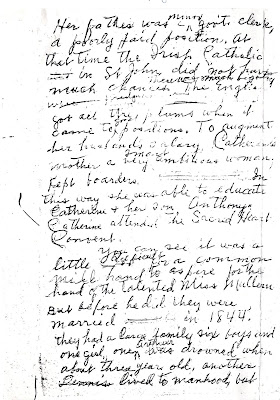 Starting off, the history says Catherine Mulhearn's (unnamed) father was a minor government clerk, and apparently a poorly paid one at that. So much so, that Catherine's (unnamed) mother had to take in boarders to make ends meet. The cause for the insufficient pay was apparently the Mulhearn's choice of religion - Anglicans got all the "plums" when it came to finding work. I know the Irish in general got a bad rap in the US for a long time, I've seen the pictures of signs and newspaper ads from back in the day that said "Irish need not apply" and such. But this seems to be more religious discrimination than national or ethnic discrimination. I don't know much about how New Brunswick society treated Catholics in the 1840s, I'd have to look into that. Knowing how members of my own church were treated in the US in that time period, it's not hard to see that such ill treatment was very much possible.

The income brought in by Catherine's mother bringing in boarders was apparently enough to send Catherine and her brother Anthony to school and receive an education, something Dennis was denied. I've never heard of Catherine having a brother, and the name Anthony is interesting, given that was the name of the first son Catherine and Dennis had. As Dennis was apparently both an orphan and an only child, the only family names he could pass on would possibly be his parents or extended family, and as far as I know extended family weren't in the traditional Irish naming patterns. It's interesting too that there's a specific name for the Catholic school Catherine attended, the Sacred Heart convent (again with the convents - I thought those were for nuns only?). Like the name of her brother, that's something concrete I can look for in New Brunswick records.

The only part that really confuses me about this page is where Dennis and Catherine got married - it says "it was a little difficult for a common mill hand to aspire for the hand of the talented Miss Mulhern but before he did they were married." It sounds like they were married before he even tried to woo her? I think something got left out. The history says Dennis and Catherine were married in 1844 and had six boys and one girl. This I know is a little off because I have a copy of Dennis and Catherine's marriage record, showing they were married on 26 January 1840 in Saint John, New Brunswick. I have records for six children total, 2 girls and 4 boys. The boys, Anthony, John, Thomas, and David, all lived to adulthood, though David died at age 27 in Montana. The girls were Eliza and Catherine, with Catherine being my ancestor. Eliza I have no record of after her baptism record as an infant, though since I can't find the family in any census records before 1881 she could very well have lived and married, and I just don't know where she ended up. There's also a seven year gap between Anthony and Eliza, so the two kids mentioned on this page of the history, Arthur and Dennis, could have been born in between and just weren't recorded in the baptism records where I found the other kids. My New Brunswick research is still a little rusty, so I'd really have to jump back in and try to find them.

I like that the history gives me some concrete people and places to search for. Just wish I had the time to go looking for them. But then, that's part of why I keep this blog - to remind me of leads I need to follow. I will get around to it at some point!!
Posted by ironhide781 at 12:23 AM