Today we're taking a look at page 2 of the Cain history from my cousin. 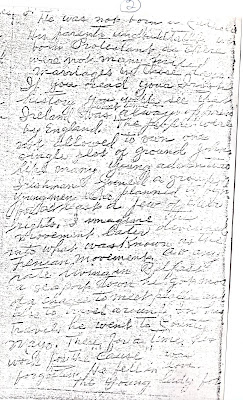 This paged focused on John O'Kane's life prior to his marriage. Surprisingly, the history says John was not born a Catholic. I know from my research that Dennis and his family were active Catholics. All his children were baptized in New Brunswick, and his daughter Catherine, my ancestor, had most of her kids baptized (couldn't find the baptism of her son John Frederick, but all four of the other kids were baptized). When Dennis moved to Montana following his wife Catherine (Mulhearn) Cain's passing, he remained active in his faith until his death at age 94. So the idea that his father may have come from a Protestant background is really interesting.

The page also talks about John's involvement in some kind of political movement aimed at restoring Irish rights of land ownership. This involvement is attributed to his growing up in Belfast, and being exposed to different people and ideas. He also traveled "for the cause" to County Mayo, where he apparently fell in love and forgot all about "the cause." The exact movement he was part of isn't named, but Virginia (the author) seems to think it was the predecessor of the "Fremen Movement."

It's been a few years (cough 16 cough) since my last class on Irish history, so I had to look through my Short History of Ireland to see what she could have been referring to. The closest thing I found was the Society of United Irishmen, which grew in the 1790s and culminated in a violent uprising in 1798. If John O'Kane was born in 1785, he would have been 6-13 years old while the United Irishmen thing was going on. There was another United Irishmen uprising five years later, though that seems to have been localized to the city of Dublin. Daniel O'Connell led a group with a more constitutional approach to independence, but that seems to have taken off in the 1810s, after John had already gotten married and become a father. So I'm not sure what "movement" he could have been campaigning for. It might have just been for Irish independence in general? I'll have to look into that a little more. 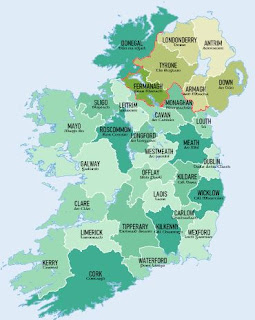 One other thing that stands out is that John started out in County Antrim, where Belfast is, and travels to County Mayo, where he falls in love. County Antrim is part of Northern Ireland now, and as I understand it, was pretty heavily Protestant back then. So the idea of John being born a Protestant if he's from up north makes sense. My Gibson ancestors were Anglicans from County Fermanagh, also part of Northern Ireland, so I have evidence of that kind of thing in my family already. Dennis Cain's obituary said he was from Strabane in County Tyrone, not too far from County Antrim. So how does County Mayo come into the mix? Would Dennis's parents have settled so far from both their points of origin? I'm sure it's not unheard of, but it just sounds odd. Then again, my knowledge of Irish history and culture is really limited, so any apparent oddity may just be my ignorance talking. There's also the fact that all of this information is third-hand at best, the recollections of the recollections of what was told to someone decades earlier. So details could have been lost, muddled, or even invented.

So far, this history has generated more questions than it's answered for me. But it at least gives me something concrete to look into, and that's exciting. Next time, we'll look at page three and see just who won the heart of John O'Kane and changed the course of his life.
Posted by ironhide781 at 4:27 PM