Cain history page 4 - and now for something completely different

Page four of the Cain history features a number of changes. First and foremost, the copy quality is SO MUCH BETTER. It was a struggle to read some of the earlier pages, but this one is clear and clean and so easy to read. My eyes just went "aaaaaahhhhhhhh." 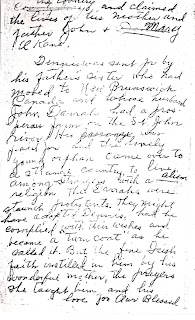 The epidemic mentioned on the previous page was apparently sweeping the country, and claimed the lives of both of Dennis's parents. I can't imagine the impact of losing both parents at such a young age. The history never mentioned what kind of work John O'Kane did, but it doesn't seem like the family was wealthy. An orphaned teenager in pre-famine Ireland probably didn't have a lot of options available to him - no one to pay for schooling, no one to provide for him. Being in that situation, the history says Dennis's paternal aunt "sent for him," and his uncle paid for his passage to New Brunswick. It makes me wonder - how did a relative an ocean away become aware of Dennis's situation? Steamships or steam-sail hybrids started crossing the Atlantic around 1815 (per Wikipedia at least), but getting word to the aunt of John and Mary's passing, then sending a response back to Ireland would have taken weeks, if not months. When was he sent for? What did Dennis do in the meantime? Was put in a poor house, an orphanage, something else? The history doesn't answer these questions.

So Dennis crosses the ocean to live with his Protestant (and unnamed) aunt and her husband, John Darrah, on a farm on the Saint John river in New Brunswick. Apparently his relatives tried to win him over to his father's former religion, but Dennis was no "turncoat" (a word he his reported to have used) and stuck with Catholicism. In describing his desire to stay Catholic, Virginia leaves off of retelling history and begins adding commentary - "the fine Irish faith instilled in him by his wonderful mother, the prayers she taught him and his love for Our Blessed [Mother]" reveal Virginia's Catholicism (or pro-Catholic leanings at least). That's not bad, it's just interesting to see how her perspective influenced the way she told the story.

There's not a lot of information to go on to find Dennis's relatives that supposedly took him in. Census records don't really begin for all of Canada until 1851, 11 years after Dennis married Catherine Mulhearn. If the aunt and uncle were about the same age as Dennis's parents, they would have been born around 1780. If they lived to be enumerated in the 1851 census, they would have been at least in their 70s. Records that early in New Brunswick are kind of spotty, or were the last time I really tried looking. It would help if I had more to go on. But at least there's a name and a place, that's something specific that can be checked for and verified.
Posted by ironhide781 at 10:42 PM