Genes Day Friday - My LivingDNA results are in!

When last I wrote about LivingDNA, I had just gotten the email saying testing had begun. At the time, they gave me an estimated completion date of September 13. Imagine my surprise when I checked my email this morning and saw that my results were ready! They have seriously overdelivered at every step of the process so far, so I've got high expectations for these results now.

So I logged in to see what they had to say. The Ancestry section has three options - Family Ancestry, Fatherline, and Motherline. Each section gives you a little tour of the info provided (though Fatherline tour said "motherline" instead of "fatherline" on each section, probably just a typo). The infographics were cool, easy to follow, and gave you the option to explore more. What I liked best is that both Fatherline and Motherline lead with the information you really want - your haplogroup (and subclade for Y-DNA). My mtDNA haplogroup is H, no surprise there. FTDNA's full sequence test listed the haplogroup as H3v-T16093C, so I wonder if LivingDNA did a full sequence test, or just lots of SNPs. FTDNA gave me a list of differences from both RSRS and rCRS values, and the list from LivingDNA only has one value in common with rCRS. So I'm guessing they did a SNP test rather than a full sequence, which is fine. They got the haplogroup right, so I'm not doubting their data, just wondering what their list of differences means in comparison with my FTDNA values. I'll have to look into this.

Looking at the Y-DNA info, once again they lead with the info you want first - haplogroup and subclade. They put me in haplogroup R-U106, subclade R-Z159. Back when I did my paternal grandfather's Y-DNA test at FTDNA in 2012, I had to purchase the Z159 SNP test, so to see that this SNP is included at LivingDNA is awesome. The coverage map for the Y-DNA is interesting, because it shows where in the world your haplogroup is predominantly from. For my haplogroup, the top country of origin is England. That matches what I've seen at FTDNA, where most of my grandpa's 12 marker matches are from England. Interestingly, Ireland isn't even on the list of countries my haplogroup is from. I'm sure there are U106 descendants in Ireland, but maybe the haplogroup shows up in less than 7% of the male population? That adds to my suspicion that my Gibsons were pretty recent transplants to Ireland and originally came from England or Scotland (Scotland shows up in the list at 15%, by the way).

Then there's the autosomal results, or Family Ancestry as they call it here. This part works kind of like 23andMe, where they have Complete, Standard, and Cautious levels Complete means they've assigned every percent of your DNA to areas where it's most similar to. Standard is their "best guess" level of assignment, with some areas still labeled "unassigned". Cautious is the level where they have the most certainty. The Great Britain and Ireland section of my Complete view down to the sub-regional level looks like this:

Most of these are areas I know very little about. I know Aberdeenshire is in Scotland, but for some reason, when I click on it, it highlights Ireland as well. But between these areas, I have ancestry from all of Ireland, most of England, and chunks of Scotland and Wales. Pretty awesome! I realize that this is the speculatory level, and not all of these areas may actually be in my family tree. So I took a look at the cautious level as well, and this is what I saw: 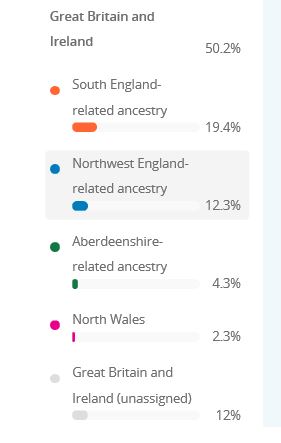 This is a lot more conservative in terms of pinpointing the areas of Great Britain my ancestors came from. But I still have most of England, all of Ireland, and chunks of Scotland and Wales highlighted. I'm very much excited by this! I took a class on English and Welsh family history at BYU, as well as one on Irish and Scottish family history. The history of all these countries is fascinating, and it looks like I might have ties to them all!

Some other interesting points from the ethnicity breakdowns:

On the cautious level, only my ancestry in Great Britain is identified by place - everything else is labeled European. When I first logged in, there was a notice or disclaimer that said basically "You're one of the first to take this test, and your results will be refined as we add more tests to our database." So hopefully as their database grows, the cautious level will become more certain for non-UK areas. Even though I took this test specifically with the intention of gaining more insight into my UK roots, I do hope that Europeans from other areas, especially France and Scandinavia, will test as well. I just like seeing the information get better in all areas basically.

Also, all three levels showed me as having 1.7% "Chuvashian-related ancestry." I have never heard of Chuvashia or Chuvashian before, so I had to look it up. According to Wikipedia, Chuvashia, or the Chuvash Republic, is part of Russia and home to the Chuvash people, a Turkic ethnic group. Apparently their history goes back to at least the 7th and 8th centuries AD. I'm thinking that my Joseph ancestors, who lived in Poland and Ukraine (or where those countries are now, anyways) are where my Chuvashian ancestors came into my family tree. None of my other branches were anywhere near there in the last couple hundred years.

So that's my first glace at my LivingDNA test results. LOTS of information!! So much to take in. I really want to look more closely at the English ancestry, and go through my family tree and see where my likely English and Welsh ancestors are. Also, I thought there was going to be matching to cousins, but I don't see that option yet. Maybe that will be opened up later on. When they open that up, I hope they include a chromosome browser. I would love to see one that mixes both ethnicity and common segments, so I can see the DNA I share with someone AND what the projected ethnicity of that segment is. Wouldn't that be awesome?

All in all, I am totally satisfied that I took this test. $99 was a huge deal, and even the current discount price of $119 is more than reasonable for all this data. For a relatively new DNA testing company, these guys have really hit the ground running. Can't wait to see what refinements and improvements are in store.
Posted by ironhide781 at 6:00 AM