Just when you think you know an ancestor...

I've written quite a few times about my 2nd-great-grandmother, Lena Beilstein. She led one of the most interesting, heart-wrenching lives I've ever heard about, past or present. There is just so much to her story, I don't know if I'll ever be able to put it all together into just one tale. Every time I think I've heard just about everything, I learn something more.

Case in point - I got a text from my grandma's cousin, saying she had come into contact with a new relative, and wanted to know whether I'd like my contact info passed on. I meant to write back and say sure, but I somehow ended up calling her instead. We ended up chatting on the phone for a half hour, it was awesome! She told me about her mom's time in the orphanage with my great-grandma Edna and their sisters, which I've also written about before. but then she told me about something new - that the state of Montana had records from the state orphan's home, and that you could obtain copies of these documents for only $25! She had her mom's record, and offered to send me a copy. I obviously said thank and yes please and every other polite phrase I could think of, and a week later, I had them.

What surprised me about the information I got from these records is that it's mostly about Lena, the mother of the four girls. To preface the impact this information had on me, let me share a picture of Lena's. I don't have a date on the picture, but she looks a bit older, like maybe late 40s or early 50s. That would put it the 1930s or 40s somewhere. One the back of the card is a hand-written note to her second daughter Hazel. 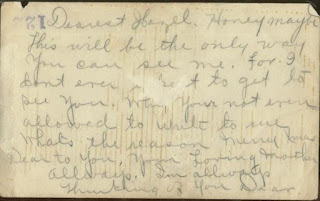 The note is very sad - she is writing to wish Hazel Merry Christmas, but says "maybe this will be the only way you can see me. Why, your not even allowed to write to me What's the reason[?]" I'd always wondered what it was that caused such a rift between Lena and her daughter Hazel. If this picture was taken between 1930 and 1940, Hazel would have been somewhere around 15-25 years old (probably closer to 15, based on the "not allowed" language). So what happened?

I learned some time ago Lena had separated from her husband and the father of all her daughters, Ernest Craddock, sometime before 1930. I didn't know when or anything about the circumstances, but there was a story in the family about Lena going to Oregon, and Ernie having to go there and bring her back, though I'd always thought that that had happened while they were married, and wasn't part of their divorce.

In going through the orphanage record, what I read cast new light on this story, and added elements I never would have dreamed were possible.  The first shock came when I read the answer to the query in the orphanage record as to why the child (in this case, Elsie Craddock) was being committed to state care:

It's one thing to know that Lena and Ernie divorced. It's another thing to read in Lena's daughter's orphanage record that Elsie and her sisters were abandoned by their mother, and their father was unable to care for his children properly. I can't imagine being a child and watching your own mother walk away from you and your siblings. Or being the father of those children, knowing that this was putting you in an impossible situation. The record also states that Ernie had to pay $15 per month per child to keep them in the orphanage. I'd always thought he'd basically been financially off the hook for them until he got back on his feet and was able to care for them, but that was not the case $15/month in 1926 equals about $200/month in today's money. That would be like me paying $800 every month for full time care for four children - something I could not afford to do, and pay all my expenses as well. I'm sure it wasn't any easier on him back then. I'm glad he stuck by his daughters though and kept those payments up so they could get the care they needed, even if it wasn't from him.

The next big surprise was that the record gave me a timeline for the dissolution of the Craddock family. Elsie was placed in the orphanage in January 1927, and at that time her parents had been separated for a year. Edna, their oldest daughter, was born in 1911, so they were together for about 15-16 years before Lena apparently decided she was done, and left. It further adds that Lena had Edna and Grace with her and had left for Portland, Oregon in October 1926, and that Hazel was in the orphanage (or "Home" as they called it) with Elsie. That's a complication I was not aware of - that Lena had taken two daughters with her when she left, leaving only two daughters in the orphanage. I know that the situation didn't stay that way for long, as the 1930 census has Edna living with her dad Ernie (she was 18 then), while Elsie, Grace, and Hazel were all still in the orphanage. Lena took Edna and Grace with her in 1926, but 4 years later, she was living without any of her children. Elsie's record doesn't say when Grace was placed in the orphanage, or whether Edna was there at all, so I'd likely have to order their records to find out details on their parts of the story.

The biggest shock and saddest part of all were next. First, the sad part. In the section "Institutional Family History' it lists some events that happened in and out of the home that affected Elsie, and the dates they occurred. The first note is from July 2nd, 1927, apparently from a Mrs. Hathaway, stating Ernie intended to take the children in the fall of that year. As already seen, that didn't happen - three of the girls were there in 1930, and Elsie's record states she was released in 1936 - 9 years after she was placed there. I can't imagine the heartbreak of those kids (or their father) wanting to be reunited year after year after year, and being disappointed again and again for almost a decade. Did they give up at some point, and just decide to wait to reach adulthood? That may have been what happened to Elsie - she was placed with her father on June 15, 1936, just five months before her 18th birthday.

But the shock was in the next note - it says Lena had left with a man named Russel Wright, a veteran of World War I, in a stolen car and was headed to Portland. Lena was picked up in Roseburg, Oregon (which is a long ways south of Portland, almost to Medford) and that she and Grace were being taken care of by Volunteers of America, while Edna was at the Sister's School. I found information about the Volunteers of America online, stating that they were like the Salvation Army but based in the US, kind of an "Americans helping Americans" program. I can't find anything on the "Sister's School"  yet except a reference to there being one out in eastern Oregon. Maybe there was a network of such schools, or something? I'll have to keep looking. Anyways, Lena and her children were "held as witness" in the case against Russel Wright. He was convicted, and Lena and her daughters were sent back to Butte, Montana, though Lena apparently expected to go right back to Portland.

I tried finding anything in newspapers on Russel Wright in Portland and Roseburg, hoping to find something to corroborate the story, and maybe fill in the gaps. So far, I haven't found anything. I don't have anything but his name and that he was a WWI vet, so that's not really enough to pinpoint who he was yet. Maybe Edna or Grace's records will have more, as they were actually with Lena and Russel on the trip to Oregon in the stolen car. I wonder what those daughters thought while on that trip - did they know the car was stolen? Were they coerced into silence? Were they told anything at all? I have no way of knowing, but it's scary to think what could have happened to them on that trip had things gone sour more than they did.

The final full entry in Elsie's record is from June 1927 and states that the children (Elsie and Hazel, undoubtedly, but maybe Edna and Grace too?) received a letter from Lena letting them know she had married again, and was now Mrs. J. White. That would be Jack White, who I found Lena living with in the 1930 census. That helps me place Lena and Jack's marriage a lot more precisely than I could have before. But the note also says Lena didn't want her daughters to tell their father that Lena had married again. It's almost like Lena was hiding from Ernie Craddock. But why? Did she owe child support, or was that even a thing in the 1920s? Did Ernie still think he could get his (ex)wife back? How did the girls feel about being asked to keep such information secret from their own father? I can only imagine it drove wedges between the girls and their parents - either they kept the secret from Ernie, which would have been really hard to do, as Ernie was the one supporting them financially in the orphanage; or they told him, and possibly felt like they were betraying their mother. I feel so sad for those poor kids being put in such a difficult situation, and I just wonder what Lena was thinking, and why she made the choices she did. I don't hate her, or think evil of her. It just makes me sad to think of where those choices led her family.


All in all, I think this orphanage record helps me see Lena in a new light, a completely different light than any other records I've found of her so far (and that takes some doing!). It helps me see possible reasons behind Lena's questions to Hazel on that photo postcard, and wonder if Hazel even wanted to write to her mother. I know Lena still had a relationship with her daughters and their grandchildren after they got out of the orphanage, as my mother and grandmother both knew Lena. I'll have to try to get the records of the other three daughters, and see if there are any more facets to Lena's story that I don't yet know. At this point, I have to give up the notion that I know Lena's story, and be ready for just about anything.
Posted by ironhide781 at 11:30 PM

Great record of the events. Really sad to know all this about Grandma Lena and I can't help but to wonder what happened in her young life that led her down this path. I wonder what her relationship with her father was as she was growing up (like did he just ignore her or what?). She was involved with so many men as she grew older. It's sad to think of her choices. Her sister was such a complete opposite of Lena. Aunt Maggie was a delightful person. I have fond childhood memories of Aunt Maggie. When Aunt Maggie could no longer care for little dog Patsy My family took her in. Poor little Patsy was old at the time we got her and we loved her.