Ireland, I am coming home
I can see your rolling fields of green
And fences made of stone
I am reaching out, won't you take my hand?
I'm coming home, Ireland
"Ireland" by Garth Brooks 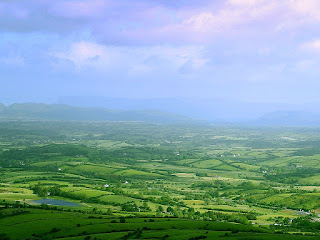 I've made a lot of discoveries in the last 16 years of genealogy research, but few as important to me as the one I made last week.

When I finally confirmed that Henry and Ann Gibson were John Gibson's parents, I went back to the County Fermanagh mailing list and asked for help in finding info on them in their (allegedly) native town of Pettigo. One of the suggestions that came back was to search the archives of the mailing list, as someone may have written about them already. So I did, and here's what I found:

Baptism records for two children of Henry - son William from wife Jane born in 1844, and another child with wife Ann born in 1845. This was hugely exciting for several reasons:
1. My Henry and Ann had a son named William, born in Ireland in 1844, listed with them on the 1851 New Brunswick census.
2. Henry and Ann had a daughter named Ann Jane listed with them in that same 1851 census.
3. The baptism records list the townland of residence for Henry and Ann - Gortnagullion in County Fermanagh, just a few miles east of Pettigo. 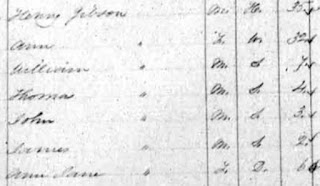 The confluence of names, ages, residences, and birthplaces all fits. I am convinced that these baptism records are my family! I have been searching and searching for this information for 16 years, and now that I finally have it, I can only think of one thing...

Well, eventually. Probably not until sometime in 2017, giving me time to plot, plan, and most importantly, afford the trip. I've said for years that I wanted to postpone a vacation to Ireland until I knew where my people were from, so I could visit the place. But for now, even just knowing the name of village where they last lived before leaving Ireland, and the possibility that I'll be the first of their descendants to visit it since they left in 1846, is staggering and exciting. As Garth Brooks memorably sang, Ireland, I'm coming home!
Posted by ironhide781 at 1:34 PM

Great News Brandt
Who knows where it will take you next.

I love that idea! Now we just need to know where in Ireland my family came from!

Many a wise person left Ireland, only a fool would stay there.
All the best for your Irish trip, have fun planning it, her any advice send me any query.
Gordon Dudgeon, Belfast.

I was close to Gortnagullion yesterday, looking at graves in a church . A lot very old.
Gordon Dudgeon