One of my brick walls for the last decade or so has been finding the maiden name of Margaret, my 4th-great-grandmother on my paternal grandmother's side. She was the wife of George Waechter, and was an immigrant from Germany, Prussia, or France (depending on the record you're looking at).

Just under three years ago, while researching my Beilstein side (the family George and Margaret's daughter Amelia married into), I found that George and Margaret had a daughter named Annie Clara Waechter who did a very remarkable thing - despite being born just 10 years after the end of the Civil War, she lived until 1967. In addition to having lived from the age of the telegraph and steam engine until the days of the space race and color television, she also did something that makes her one of my genealogical heroines - she filled out a Form SS-5 and applied for a Social Security Number. This is a fantastic thing because, unlike death certificates, which are usually completed by surviving spouses or children, the SS-5 was filled out by the applicant themselves. This means that the information on her parents' names, including the mother's maiden name, came directly from her. While this still leaves room for error (as it's not coming from her mother herself), this is about as close to the original source as I've been able find. So I filled out my FOIA request and included the requisite check of $27 (thank you SSA), and waited for a response.

After only six months, my check was finally cashed. So I waited a bit longer.

I went in and out of remembering that this request was still out there somewhere, and hoped against hope that the record might someday come. I tried looking up numbers to call or addresses to write to, but each time I made contact I was told to wait for them to get back to me. Which they never did.

So eventually I got busy with other things like having a third child, going back to school, and job hunting, and my quest for Margaret's maiden name got pushed aside. Until this past January when a blog post from The Legal Genealogist Judy Russell came along. She went over what you can expect to find in the SS-5 and gave some tips on how to obtain it.

I decided to ask Judy on Google+ if there wasn't something I could do to finally get my hands on that SS-5 without forking over another $27. She recommended I contact the public affairs office of my area's representative (senators are over too big an area, and the request might get lost) and have them lean on the SSA a little, which might get my request fulfilled. So I looked him up and did so. Within a couple hours I got a privacy release form, basically saying "tell us who you are, what you're looking for, and give us permission to go look for it for you". I was told that his office would be in touch with me in 30 days or less. So I set my calendar and started watching the mailbox.

Then yesterday, a miracle happened - the SS-5 arrived! I was almost too excited to open it, afraid that somehow that maiden name wouldn't be there. But it was! 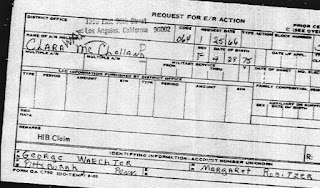 I now have a document giving me the maiden name of my ancestor - Margaret Robitzer! Margaret is a special ancestor for me, as she is the source of my very own mitochondrial DNA, and that of my siblings and cousins from my mom's sister. One of my cousins on that side is pregnant with a baby girl right now, and that baby girl is the only person among my branch of Margaret's descendants who will receive that DNA and be capable of passing it on (no pressure, kiddo!). It's awesome to me - literally awe-some - to be able to trace that DNA from its most recent recipient in 2016 back to its earliest known source in 1830 to somewhere between France and Germany in the Robitzer family.

The moral of the story: never give up hope. Keep pushing for that record that you know is out there, and eventually it will find its way to you. No matter how thick that brick wall seems, a way through may just show up in your mailbox years after you'd given up on ever finding it.
Posted by ironhide781 at 12:05 AM