Getting to know Margaret Robitzer

Having recently discovered Margaret Robitzer's maiden name, I did exactly the same thing that has led me to so many other discoveries in recent years - I joined a mailing list. This time it was for Alsace-Lorraine, the area I suspected Margaret had come from. Searching Ancestry.com had led me to Margaret's death certificate from 1914, which gave me two additional bits of info - the names of her parents, Jacob Robitzer and Catherine (last name unknown), and her immigration record, showing she arrived in New York in 1852 aboard the ship Caspian. Armed with all this info, I asked the mailing list if they could help me get more info on Margaret's family.

They came through in SPADES.

Within a matter of hours, I had information on her parents (whose names were actually Johann Robitzer and Catherine Robitzer, and yes, they were related - first cousins), as well as several generations of her ancestors, all hailing from the town of Uttwiller in Bas-Rhin, Alsace-Lorraine, France. I couldn't believe it! The only hitch was, with all the info they were sending me, they didn't tell me exactly where the info came from. And being the stickler for details that I am, I had to find the source of all this goodness.

I went back to Google and started searching for Robitzer, Uttwiller, and Alsace-Lorraine. I eventually found my way to a site all in French (which I was able to translate thanks to my Chrome browser) that housed all kinds of records from the Bas-Rhin area! After poking around the site for a few minutes, I discovered census records from the 1830s-1880s, as well as digitized copies of the original civil birth, marriage, and death records covering decades, beautifully organized and easily searchable by year, with a huge index for everything. The scans were amazing, the handwriting was clear and legible, and because the town was so small (population about 250), there were usually only half a dozen births, marriages, or deaths any given year, so searching year after year after year was very easy. I have to say, this region is, in my opinion, the gold standard of genealogy record websites. Everyone needs to organize their documents in exactly this way.

So now, after a few days of searching these records, I've been able to put together the immediate family Margaret left behind when she left France in 1852. There are a lot of Robitzers and connected families in these records, so reassembling her family in Uttwiller (and probably in the surround villages as well) is going to take some time (which I don't mind at all!). Here's what I've put together so far.

Quick side note - some of the given names will be French and some German. I would assume that all the names would have been German originally, given that whenever their names are listed for them in the documents, the names are in their French forms, but when they signed their own names, they signed the German forms of the names. I haven't yet found showing the exact German forms of everyone's names, so for now I'll just use the French versions that I have found.

Johannes Robitzer, son of Philipp Jacob Robitzer and Barbara Lickel, married his first cousin Anne Catherine Robitzer, daughter of Johann Heinrich Robitzer and Margaretha Mühlheim in 1815. They eventually became the parents of 9 children, though two of them died in childhood, Anne Catherine at age 4 and Jean Michel at age 10. The surviving children were Jean, Jean Henry, Jacques, Catherine (named after her older sister, who died a year before she was born), Jean Michel (named after his older brother, who died three years before he was born), Margaret, and George. Johannes was listed as a day laborer when he and Anne Catherine got married in 1815, though by the birth of their first child he was listed as a farmer, so he seems to have established himself pretty quickly. His wife was the daughter of a teacher, though what he taught and where I don't yet know.

Johannes and Anne Catherine lost two children in 1826, Anne Catherine in August and Jean Michel just 3 months later. Because my ancestor Margaret wasn't born until 1831, she never got to meet these older siblings. Anne Catherine passed away in 1844, a few months shy of her 50th birthday, leaving Johannes to raise the four kids still at home by himself. From what I've seen so far, he never remarried. Margaret is not listed in the 1851 census, so I'm not sure where she was, as she didn't arrive in New York until 1852. The other children gradually moved out until only Michel was left (I'm not sure if it was the same house and Michel took over as head of the family, or if Johannes moved in with his son). I don't know if the other kids immigrated or stayed in the area, but I'm glad at least Michel was there for him. The last record I have of Johannes is the 1866 census, showing him at 81 years old living with his son Michel, Michel's wife Marie, and their son Michel.

It's kind of a somber thought, picturing Johannes with a large family that gradually gets smaller and smaller as children pass away, then his wife, then children move away until it's just him and third youngest child, a daughter-in-law, and a grandson. Hopefully some of his other kids either stayed nearby or at least kept in contact with him.

While I was reviewing all of this information for this blog post, I realized something. When my ancestor John Gibson died in 1914, his daughter Annie Condon was the informant for the information given on the death certificate. Where the certificate asks for parents' names, Annie said she didn't know. Also, it's interesting that she gave her father's birthplace as England, instead of Canada (where both she and her father were born). Annie was John's only daughter and second child, and she was born less than 10 years after John's parents had died. Yet, unless she purposely gave false information, she apparently didn't know these basic facts about her own father. The only reason for this that I know of is he didn't tell his kids about his family. I have to wonder why he didn't tell his kids about his family. Was there a falling out? Did something happen? I don't know if I'll ever know for sure.

Comparing that to Margaret's family, it seems obvious that she did the opposite. Her obituary states when she came over to America, and that she left from Alsace Lorraine. Her death certificate, with info given by her daughter Annie Clara McClelland, gives her parents' names (the father's name was slightly off, but pretty close coming from someone who had never met their own grandfather). She passed down at least some of her history to her children. Whatever drove her to leave her native land, she didn't leave her immediate posterity in the dark as to where she came from like John Gibson did. 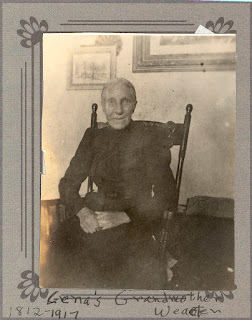 This is a picture of Margaret, the only one I know of in existence. When I first received a copy of it, the information on the picture was all I knew of her. A few years later, I'd added a first name, but not much more. But now, I feel like I can look at this picture and say to her "I know you. Your name was Margaret Robitzer. You came from a big family of 9 kids. You lost your mom when you were only 13. You left home at 21 and never saw that family again. You married and had an ever bigger family of your own. And most of all, you told your children where you were from. You didn't leave the father and siblings back in France out of your story. And now that I know you and them, I will make sure that your story is never forgotten again."
Posted by ironhide781 at 2:41 PM