Among all the photos I've collected in my genealogy research, there are a few that I just love looking at again and again. They just stand out to me, either because of the people in them, the significance or provenance of that particular photo, or what I've learned as a result of that picture. The above photo, a picture taken for my great-great-grandaunt Tina (Joseph) Leistiko's wedding to her second husband John Levick, hits me on all three points.

1. People in the photo - Given that my middle name is Joseph, a name I share with my grandfather and passed down to one of my sons, I've felt a particular connection to my Joseph relatives. This was the first picture I was shown of my Joseph relatives (and the only I saw for many years), and I just love seeing them all together like this. You can see the resemblance between my great-great-grandfather Samuel Joseph (seated second from the right) and his brother Gottlieb Joseph (seated second from the left). This is also the only known picture of Marie Joseph, the little girl sitting on her father Elmer Joseph's lap. She was two years old in this picture, and died seven years later in a car accident. I also love the fact the my great-grandmother Augusta (Joseph) Staffen is in this picture, standing third from the right. She died when my grandpa was only 5, so we have very few pictures of her.

2. Significance or provenance of the photo - Unlike some families I know, my family doesn't really have any heirlooms. No rings or jewelry that belonged to a great-great-grandparent, no desks or chairs or armoires passed down, no family Bibles (though I should point out there are family Bibles out there, just none made it down my line). The one thing I do have that's been handed down to me are some family pictures and a few postcards. I was just recently given the original copy my grandpa owns of Tina and John's wedding picture, which makes it at 98 years old one of the very oldest pictures I have. As far as I know, this was my great-grandmother's own copy of the picture. And to think I now have something in my possession that was once hers, that she actually handled and looked at, is thrilling to me.

3. What I've learned as a result of the picture - This picture has been the instigator of many genealogical conversations with my parents and grandparents. We've talked about Augusta and her background, about her father and aunts and uncles, about her grandfather Ludwig Heinrich Joseph, seated in the middle of his two sons, and how large his hands are (I can't help but think he could easily palm a basketball). It even taught me something today, if indirectly. While looking at this picture again, I thought I'd go back to John and Tina's marriage record, which I found in FamilySearch's database of Montana county marriages. Looking through it, I noticed something I'd forgotten. 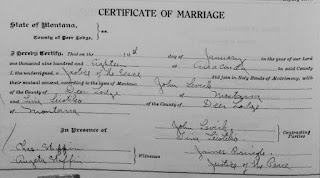 The witnesses for the marriage were written as Chas. Staffin and Augeta Staffin. These would be Charles Staffan, first husband of my great-grandmother Augusta, and Augusta herself. I only have one other record of Charles with Augusta, and that's their marriage record from 1910. Given that John and Tina were married in January 1918, and Charles died later that same year, this is likely the last record he appeared in before his death. Kind of a sobering thought. But in a way, I'm glad that the last time he appears in a record, it's with family.

Do you have any pictures that are as meaningful to you in your research? Comment below and let me know!
Posted by ironhide781 at 6:00 AM