My aunt's ancestors - the Pattinson and Rooney families

A few weeks ago, a whole big group of my dad's family gathered to celebrate my grandpa Fred Gibson's 94th birthday. It was so much fun seeing so many relatives together, all gathered to celebrate the life of my amazing grandpa. While we were there, my aunt Sandy (uncle Randy's wife) came up to me, and asked me if I would be willing to do some research on her ancestry. She said her dad was from England, as were her mom's parents, and she knew little to nothing about her ancestry beyond them. That sounded super interesting to me, so I said sure, give me a couple hours and I'll see what I can find. Of course I'd brought my laptop with me, just in case someone wanted to talk family history. So I went to work.

I found she had some really cool stories in her background! Her dad, Matthew Pattinson, was born in Netherton, Cumberland, England, and came to the U.S. in 1930 at the age of 25. As far as I can tell, he came alone - no parents, no siblings, just him embarking on a new life in the U.S. I was lucky enough to find a picture of him: 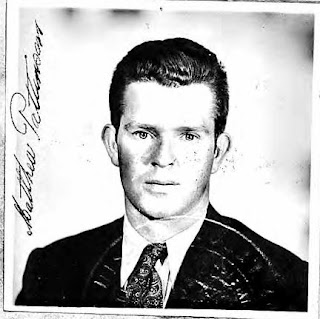 Of course, I had to run it through the new MyHeritage colorizing app, and it turned out really well! 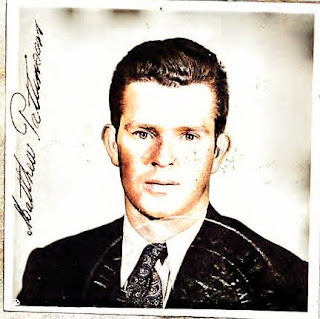 He arrived at Ellis Island aboard the SS Laconia, pictured here: 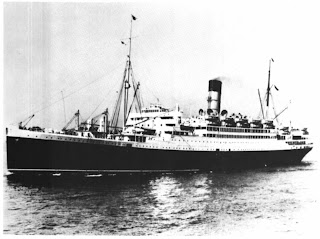 He'd only been in the US for four years when he declared his intention to become a US citizen. He officially became a citizen of the US on 19 September 1938. I wonder if this event was more meaningful to him because of the family he then had - he'd married Kathryn Crellin in 1935, and by 1938 they had two boys, James and Joseph. I wonder if his wife and sons were there at the courthouse when he made his oath of allegiance. What a cool moment that would have been!

Like many others in Montana at the time, he found work in the mining industry, working for the Anaconda Copper Mining Company as a general miner. What really stood out to me, though, was the fact that he registered for the draft in October 1940, well over a year before the US entered WWII. I can imagine he followed the news of his native England's involvement in the growing war in Europe, but it impresses me that he would be willing, barely a decade after arriving here, to be called up to serve in the US military. I know we often speak of that generation as the "greatest generation," but seeing documents like this really bring it home just how great they were.

Looking into Matthew's past, I found he was one of at least six children of Isaac and Eleanor (Crellen) Pattinson, from Cumberland County, England. He had three older brothers, Joseph, John, and Tom, and two younger sisters, Sarah Ann and Eleanor. His father Isaac worked as a railway guard, which I thought was really cool as my family has a lot of history working in the railroad industry. Matthew's youngest sister, Eleanor, was only about 9 when Matthew left for the US. I went on my mission when my brother Jeff was 11, and in some ways, that's the image I still have of him, even though he's now a doctor, married, and raising two boys. I wonder if Matthew saw his parents or siblings after leaving England. I hope he at least had some correspondence with them.

I haven't found too much on Isaac's background yet. I know he was born in Cumberland, England, in 1871 to Matthew and Ann Pattinson, which shows Matthew was likely named after his paternal grandfather. He married Eleanor Crellen in Cumberland in 1897, and their oldest son Joseph was born two years later. Eleanor was the oldest child of Joseph and Ann Crellen, who were both born in Cumberland in the 1850s. Eleanor's youngest sister, Betsy, was only 9 years older than Eleanor's first child, so it's pretty fun to imagine them growing up knowing and playing with each other. Isaac was a widower by 1939, when he and his daughter were enumerated in the England register that year (kind of a census substitute taken as World War II ramped up). That would have been a scary time to live in England, even if you lived many miles away from London and the terror of the blitz. He lived through it though, and passed away in Cumberland in 1950.

Looking into the ancestry of my aunt's mother, Kathryn Rooney, I found she had English roots as well. Her parents James Rooney and Martha Barton, were both from Cumberland, England, and Kathryn's oldest brother William Rooney was born there as well. Interestingly, James immigrated to the US  just a few weeks after William was born. I can't imagine leaving my wife and infant son like that, going so far away to establish a new home but not knowing when I'd see them again. He arrived in Boston, Massachusetts, in August 1906 aboard the SS Cymric, shown below. 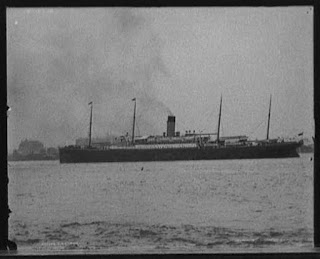 I found James in the 1910 census in Montana, working as a copper miner. What's really cool is he actually lived with his brother Hughey, who was also a copper miner. If James was away from his wife and son, at least he had other family with him. Martha and William did eventually join him, arriving at Ellis Island in October 1910 aboard the SS Carmania, which you can see in the picture below.

James went through several occupational changes over the years. By 1920 he was a farmer, and worked on his own farm. Farming may not have been his thing, or perhaps it just didn't go well, because by 1930 he was back to copper mining, which he did through 1940. In 1942, he was a watchman for the Anaconda Copper Mining Company, but by 1948 he was again working as a miner. He died in 1949, though the cause of death was unclear - doctors felt it may have been tuberculosis, but it could also have been pulmonary fibrosis. Either way, even though he was 71 when he died, he apparently had been working right up until the end.

I don't have much info on James' parents yet, just that their names were Hugh Rooney and Anne McManus, and they were apparently from Ireland. It will be really interesting to see if I can find where exactly in Ireland they were from. Irish research has been really tough for me up until now, but these Irish ancestors are from the Republic of Ireland and lived several decades later than my almost impossible to find Gibsons and Stephensons in Northern Ireland. So hopefully I'll be able to find something.

Martha Barton, the wife of James Rooney, turned out to be the youngest of eight children of John Barton and Catherine Bouden, from Cumberland (lots of Cumberland ancestry!). John was a coal miner, and his sons worked in the mines too. In 1891, John and his sons Thomas (18), John (16), and William (14) all worked in coal mining, while the younger kids either went to school or stayed home. It blows my mind to think of a 14 year old boy working in a coal mine - my oldest is almost 14, and the thought of sending him down a mine shaft is beyond imagination. Things really were different then.

That's all I've got so far, but I think it's a good start! Lots of Cumberland ancestry with a dash of likely Irish. It'll be very interesting to see what other stories are waiting to be uncovered.
Posted by ironhide781 at 1:28 PM