The craziest adoption case I've ever worked on

A few months ago, I heard the sad news that Samuel Smith, the father of my uncle Rick, had passed away. His family knew he was adopted, but they had no information on his biological family. My aunt contacted me about looking into his family history and seeing if there was anything I could do about identifying his biological parents and family. Since that's basically what I do for a living, I readily agreed.

First, we had some DNA tests purchased. My aunt was fortunate enough to get a DNA sample from Sam, so she sent it off to FamilyTreeDNA for processing, and also got tests for uncle Rick and his sister. Then my aunt emailed me copies of the documents they had for Sam, and I got started with those. The story I started uncovering turned out to be the wildest adoption story I have ever worked on.

There were two documents for Sam, and four for his adoptive mother, Helen Murphy. For Sam, we had his birth certificate from Cedars of Lebanon Hospital in Los Angeles, complete with baby footprints. It gave Sam's full name, the day and time of his birth, and was signed by two members of the hospital staff. On the back of the birth certificate in the upper right corner, two names were handwritten - Geo. F. Smith and Mary V. Kelley. The other document was a baptism record for Sam's baptism at the church of Our Mother of Good Counsel a little less than a year after his birth. The baptism record specifically said Sam was the son of George F. Smith and Mary V. Kelley, the same names on the back of the birth record. At first I thought, OK, if I can find this couple, I can start to track down his biological family. Simple right?

As I searched California records, and then branched out to other parts of the U.S., I could find no trace of a couple with those names. No censuses, no marriage records, no death records, nothing that put a George Smith and Mary Kelley together around 1930. In other cases I've worked on, when the person gave specific names for their parents and no record of those parents appears to exist, there's a reason for that - sometimes those parents don't exist. I started considering the possibility that these were false names, and that Sam's actual parents had no connection to those names.

Looking at the records for Sam's adoptive mother, Helen Murphy, brought additional questions. I had a copy of the adoption record for when Helen adopted Sam (which wasn't done until Sam was a married adult), her driver's license, Social Security card, and her birth record. The first three records were consistent in giving her name as Helen Victoria Murphy, and her birthdate as 8 July 1893. The last one was weird - her name was listed as Nellie Murphy, daughter of John A. Murphy and Maggie Lafond, and said she was born in Holyoke, Massachusetts.

As I started researching Helen/Nellie Murphy, things got more complicated. I found her in the 1930 census living alone in California. Her name was listed as Helen V. Murphy, born in Massachusetts. So far, so good. The 1940 census showed her again as Helen Murphy, but she had two lodgers living with her - an elderly widower named Arthur Cahill, and an 8-year-old boy named Samuel Smith! Sam wasn't a son, or an adopted son, but a lodger. Helen was the source of the information for the household, so she's the one who gave him that relationship, as far as I can tell. How did he end up living with her as a lodger? What caused her to legally adopt him 20 years later? I had no idea. And who was Arthur Cahill?

Arthur's obituary showed he died 8 years later, in March 1948. It said he came to California about 1930, and had formerly worked for the Boston Globe, giving him a connection to Massachusetts (which was very interesting, given Helen's birth in that state). Arthur had four survivors listed - a sister Nanette Baker, nephews Arthur and Edwin Baker, and a daughter - Helen V. Murphy. WHAT?? His memorial on Find A Grave even linked him to Helen as her father. What was going on here?

I started to wonder if the birth record for Nellie Murphy was for someone else, and Helen just somehow had a copy of it. I researched Arthur Cahill's life in Massachusetts, and found he married a woman Helen Sangster about 1893 in Massachusetts, where they lived until Helen died in 1919. Interestingly, they had no children together. So how could he be her father? I found another copy of the birth record for Nellie Murphy, which confirmed the name Nellie Murphy, her birthdate, and her parents, John Murphy and Margaret Lafond. Then came a piece of evidence that helped tie these names together - Sam Smith's birth certificate from the state of California. It listed his parents as George Joseph Smith and Mary Vronika Cahill.

Veronica was Helen Murphy's middle name. Cahill was the surname of the man she passed off as her father in California, who actually had no children of his own. Nellie apparently used the name Helen Veronica Murphy in public records in California, and passed Arthur Cahill off as her father, which could explain the Cahill name on Sam's birth certificate. I don't know what all it took to use a false name in the 1930s, but having researched two other individuals (for work, not my family) who changed their identities and went by assumed names for much of their lives, I don't think it took much. So how did Helen/Nellie/Mary connect to Sam?

That's where the DNA tests helped. Sam's results came back, followed soon by his son Rick's results. Between the two, I found multiple relatives with French-Canadian ancestry, and several descended from a couple named Severance and Philomene LaFonde. As I researched this family, I was shocked to discover Nellie Murphy's mother, Margaret Lafond, was the daughter of Severance and Philomene. I soon found other DNA matches who were related to Margaret's father, John Murphy. The more I looked at the names and amounts of shared DNA, one thing became abundantly clear - Nellie Murphy was Sam's biological mother. For reasons I can't fathom or guess, she apparently used assumed names when Sam was born and baptized, and when she reported his birth to the state of California. Then then the census was taken in 1940, she referred to him as a lodger rather than her biological son. What I do know is that she never married that I've been able to find record of, and that she had Sam baptized in a Catholic church (which makes sense given her Irish and French-Canadian background), so it may have been something to do with the social stigma of having a child while single. Regardless, she kept her son and raised him. According to my aunt, she never told him he was her biological son, just that he had some French ancestry, and that his father was a Catholic priest.

That leads me to the next part of the problem - who was Sam's biological father? This is where the idea of "fishing in all ponds" really paid off. Sam's DNA was tested at FamilyTreeDNA, where I found the first connections to the LaFonde family. Rick tested at Ancestry, where I found more LaFonde and the Murphy connections. When I transferred Sam's results to MyHeritage, I found something I didn't expect - a paternal match who shared more than 600 cM of DNA with Sam!! This meant he was likely a first cousin or first cousin once removed to Sam, or some other close relationship!

Fortunately, this match had an unusual name, and several of his children and other relatives had tested, and had some great information in their family trees. Eventually I found that this cluster of matches descended from Wilhelm Teufal and Bertha Gorske, German immigrants who settled in Wisconsin in the late 1800s. Among their descendants, four men fit the statistical probabilities of being Sam's biological father - their son William Tifal (his name was changed later on, probably to assimilate easier), William's son Charles Tifal, William's brother Gustav Tifal, and Gustav's son Chester Tifal. At the time of Sam's birth, William and Gustav were in their 50s and married (while Helen was in her late 30s). They are still both possible birth fathers, but their age difference and marital status (they stayed married all their lives) makes them a bit less likely. Charles and Chester were single and in their 20s, and both lived in the Los Angeles area at the time. Statistically, though, Chester was a long shot, while Charles was a lot more likely. Therefore based on age, circumstance, and statistical analysis, Charles Tifal is the most likely candidate for Sam's birth father.

Charles was not a Catholic priest though. While originally from Wisconsin, his family moved to California when he was very young. He married a woman named Ann Killoren in 1932 (not long after Sam's birth), and they stayed together until Charles' death in 1972. He served in the Army for four years during World War II and worked as a superintendent of a warehouse in the LA area. The Teufals were Lutheran I think (I had some problems with the records I downloaded on them and lost a few, trying to recover them but I think I saw them in Wisconsin Lutheran records). So the idea that Sam's father was a Catholic priest seems to have been a fabrication.

It's weird to think that, if Helen had used the surname of her son's father, my uncle Rick would be Rick Tifal or Rick Teufal, rather than Smith. Someday I hope to see a picture of Charles, just to see what he looked like. He played an interesting role in part of my family's history, even if he never knew he did. His son Sam had German, French-Canadian, and Irish ancestry, and we can now say who those ancestors were and where they came from, at least for a few generations. Maybe over the summer I'll see if I can take any of these lines further back. I'd love to found out where the Teufals came from in Germany (or if it even WAS Germany for that matter). I did find a picture of the ship Charles Tifal's grandparents sailed on to get to America though, the S.S. Mosel, shown below. 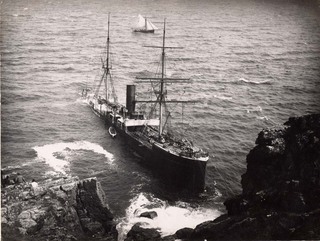 But that's a mystery for another day.
Posted by ironhide781 at 2:25 PM