I haven’t had a lot of time lately to work on my own family history so I made a special effort to get some time in last night. I wanted to check at least one of my grandparents’ DNA tests and see if they had any new important matches (ideally one that would help me break through one of my brick walls). Since my paternal granoda’s Gibson and Cain lines remain my most stubborn brick walls, I checked his account at 23andMe.

His closest matches are descendants of his maternal uncle, Elmer Joseph. Then there are a few matches on his father's side, descendants of his aunt Annie Condon and uncle Thomas Gibson (one of which turned out to be an adoptee). Then there's a mix of maternal and paternal matches that are a little more distant - descendants of his maternal granduncle Gottlieb Joseph and paternal granduncle Anthony Cain. There's a whole group of descendants descended from his grandaunt Tina (Joseph) (Leistiko) Levick, seems that branch of my family got into DNA testing! There are a couple that I know which side of grandpa's ancestry they belong to, but I don't know exactly how yet (mostly because they haven't responded so I don't know anything about their ancestry).

As I worked through these matches, it struck me how much I've learned about my grandpa's ancestry since he did his first DNA test back in 2012. The fact that I can pinpoint where a lot of these matches fit in my grandpa's family tree is amazing to me. I didn't have as much luck with his matches at FamilyTreeDNA. Part of that is because his matches at FTDNA are much more distant, and their common ancestors are back further than I can go at this point. Because of that, I've spent most of my efforts on grandpa's matches at other websites, like 23andMe and Ancestry.

Ancestry has made some great improvements in their DNA offering, with the addition of color-coded groups and Thrulines to help see where you and your matches may be related (provided you have public and searchable trees attached and linked to your test). There are a lot of matches here related to Tina Levick, more than are at 23andMe, and quite a few Gibson and Cain matches too. I'm hopeful that I will eventually break through the brick wall on my Cain side and find where in Ireland Dennis Cain was from as told in Irish records. My biggest breakthrough so far thanks to Ancestry was help in identifying the maiden name of my grandpa's great-grandmother Pauline. We thought it was Rosen, based on the death certificate of grandpa's mother, Augusta (Joseph) (Staffen) Gibson, but it turned out to be Rosenke. That led me to find Pauline's parents in German records in Volhynia, which I still can't believe I found. I need to pursue that some more at some point. Along with about a billion other leads...

One exciting lead I followed just today was from a match at Ancestry, who turned out to be a Gibson match. She is a descendant of Sarah Gibson, a sister of my grandpa's grandfather John Gibson. Sarah Gibson married James Harris, a native of Nova Scotia who was 17 years older than she was, and they had six children that I know of. One of her grandchildren, George Aubrey Harris, left Canada in 1922 and sailed to Boston, where he married Gladys Moriarty and raised his family. As a fan of the classic Sherlock Holmes stories, I loved the fact that I now have Moriarty relatives. I even found an old postcard of the ship he sailed to Boston on, the SS Governor Dingley. 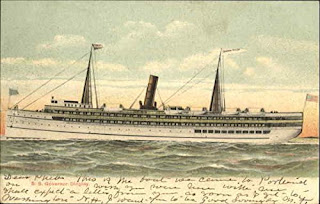 I wish I had more time to work on this, and I do get frustrated at these stubborn brick wall ancestors sometimes. But I'm grateful for all I've learned so far and I'm excited to see what else there is still to learn.
Posted by ironhide781 at 11:21 PM