Good things do occasionally come to those who wait

The last couple weeks have been such a roller coaster ride. I took a short trip to Utah for the annual company retreat, which was amazing; turned in some projects for work where we were able to find quite a bit of info for a few clients; spent some time as a family doing service for others; and biggest of all, today was the third birthday of my son Levi, who left us two months after he was born. I can't begin to describe the range of emotion that goes along with all of those activities, but it honestly was a little exhausting. So to have some time to just sit back and explore my own family history for a bit is, for me, the ultimate in relaxation. 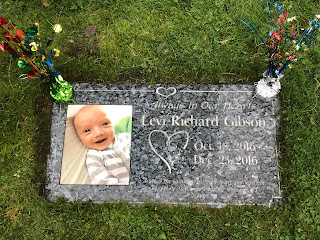 And I've got some great discoveries to share! At the retreat last week, we had some free time on Friday morning, and management asked us what we'd like to do. Some folks said they wanted to collaborate on a work project, as those are fun to do - you really get to see your coworkers in action, watch brainstorms happen on the spot. Someone said they wanted to do their own family history, which I totally agreed with - seems I have so little time for it anymore, between trying to fit in two jobs, two church callings, family responsibilities, and everything else. But then I thought - what if we did both? What if we collaborated on each other's family history brick walls? The idea of having these awesome minds I work with helping me tackle my family history problems was exciting, so I suggested it, and the response was really positive, so we did just that. Three other coworkers and me brought genealogy problems to be solved, and the company split into four teams. The problem my team and I tackled was the origins of my fourth-great-grandparents, George Donald McDonald and Jane Dobson. Both were born in England, though they apparently immigrated separately (Jane around 1830 as a five-year-old, George I don't know when) and raised their family in Ontario. I had no siblings, no parents, no extended family for either of them, and with a name like McDonald, I hadn't ever tried to find them amongst all the other McDonalds out there.

My awesome team helped me in several ways - scoured church records for evidence of them (didn't find anything), traced the lines of my ancestors' other kids and tracked down living McDonalds who could be invited to do a Y-DNA test; and helped me identify genetic matches on my Dobson side with some big clues as to Jane's parents, siblings, and point of origin in England!! Needless to say, I was over the moon about all of this! I still need to go in and verify the paper trail for my apparent Dobson relatives to make sure everything checks out on their end, but if it does, then I can finally link that side of my tree to its Old World origins. That was on my bucket list of genealogy problems to solve, so I am super stoked on that.

The other breakthrough came just today. A little over 2 1/2 years ago, I upgraded my paternal grandfather's mitochondrial DNA test to a full sequence test - I really wanted to see what it said about grandpa's mother's mother's mother's line. FTDNA had trouble processing it, and at one point they even asked for another DNA sample (which we provided). They tried and tried again and again, but for some reason they said it just wasn't working. Eventually, after months and months of unsuccessful tests, they said they had one last option - a last ditch, all or nothing final effort. There was no guarantee of success, and if it failed to read his DNA, there would be no refund, and no timeline for when or if it would succeed. On the other hand, I could take the refund, but get no results, and I would not be able to resubmit another test (because they said they'd already lost money on this one from having re-run it so much). I weighed the options, and figured I had nothing to lose by trying the rescue program, as they called it, because it was the only option that offered me what I wanted most - the full haplogroup of my grandfather's mtDNA, and the opportunity to find matches on that line. So I opted for the rescue.

I checked in on the progress every six months or so, but the answer was always the same - we don't know if it will work, and we don't know when we'll know the results. Then today a little before dinner, I got a few emails from FTDNA - the results were in!!! I now know that my great-grandma's mtDNA haplogroup is U5b2a1a1. The cool thing is, he has seven perfect matches that show their mtDNA line's origins - one is in the US, one in Poland, and four in Germany. That fits perfectly for where his mother's line is from - they were Germans living in what is now Ukraine. Grandpa's mom was Augusta Joseph, who was born Uljanowka. Her mom was Pauline Rosenke, born in Zhitomir, in the Volhynia region of what is now Ukraine. Pauline's mom was Marie Siebert, though that's all I know about her. So whatever connection my grandpa has to these matches is through Marie. But even just knowing her line was apparently German for at least a ways back is really cool - drives home just how German his mom's side really was. That's information that was worth waiting 2 1/2 years for.


So now I've got some new answers to old problems, new tools to work with, and more answers to find. Which is exactly why I love genealogy - you get the satisfaction of solving difficult puzzles, only to realize you just expanded the size of the original puzzle, and there's still work to do. It never ends, and that's a great thing!
Posted by ironhide781 at 12:12 AM