It's been a few weeks since my AncestryDNA results came back, so I thought I'd take a minute to start looking at them, see what they have to say. In this first installment, I'm taking a quick look at the part everyone seems to think of first/most when they think of DNA tests for genealogy - the ethnicity results.

My genetic genealogy research thus far has taught me that ethnicity results can reveal a lot, both by what you see and what you don't see. It was one of my grandparents' ethnicity results that tipped me off that something was not as it should be, and led me to one of the most shocking discoveries in all of my family history research. Thankfully, with my own results, there was nothing so earth-shattering. But it has been interesting to analyze.

So according to Ancestry, my genetic heritage comes from three main areas - Europe West, Scandinavia, and Ireland. Knowing what I know from paper trail research, this sounds pretty good so far. Let's take a look at my pedigree and compare. FYI, the names of living ancestors have been removed to protect the innocent. 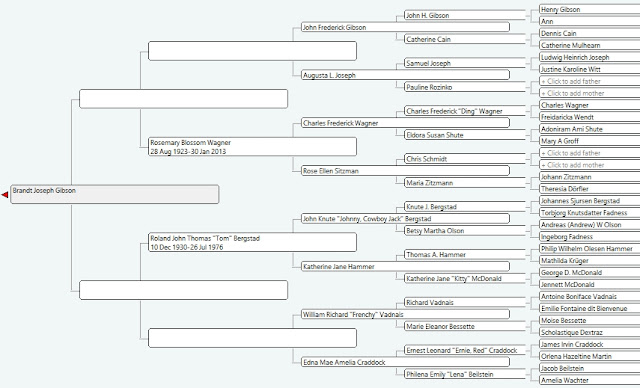 Let's take the smallest of the three main percentages first. Ireland is where my paternal grandfather's father's side is from. Four of my 3rd-great-grandparents - the Gibsons, Cains, and Mulhearns - all came from Ireland, Gibsons from County Fermanagh, Cains from County Tyrone, and Mulhearns from parts as yet unknown. (Nice rhyming!) Ireland got 6% of my genetic heritage, while my Irish ancestry is about 1/8, or 12.5%. So what gives? Given that my Gibson surname isn't your typical Irish name, I have a sneaking suspicion that they were originally from England. When I went to a workshop put on by the Ulster Historical Foundation, and bought a book called 'Men and arms' - The Ulster settlers, c. 1630. It's all about military men from England moving into Ireland in the early 1600s. There were even records of at least 3 Gibsons moving into County Fermanagh. I kind of fancied that my Gibson ancestors were among them, moving into Ulster, and settling down in County Fermanagh for a couple hundred years, until they moved to Canada. I have no proof of that, of course, so I'll need to do further research and see if I can't go back beyond Henry Gibson and see where those Gibsons originated from before they got to Ireland.

Scandinavian was the next highest percentage, with almost 20%. I have a lot of Norwegian ancestry on my maternal grandfather's side - his last name was Bergstad, if that tells you anything. On that side, I have Olsons and Hammers and Fadnesses and Sjursens and all kinds of good Norwegian names. Out of my 32 great-grandparents, 5 of them were Norwegian, 4 of them born in Norway and one being the child of Norwegian immigrants. Mathematically that works out to about 16%, so that's right on the money. I'm ok with a little extra Viking blood in my veins!

Now for Europe West. Ancestry defines their Europe West area as covering "Belgium, France, Germany, Netherlands, Switzerland, Luxembourg, Liechtenstein," and also "England, Denmark, Italy, Slovenia, Czech Republic." If I stick with just France and Germany, that covers 17 of my 32 3rd-great-grandparents (counting the Germans from outside of Germany as Germans). Then I have a couple of English or presumed-English/Scottish lines counting for another 6 of the 32. So that's 23 out of 32, or about 71%. Ancestry gives me 65%, so that's pretty dang close!

I know that ethnicity estimates are exactly that - estimates. As Judy Russell has said more than once, these numbers are really good for conversation pieces and not much else at this point. But on the whole, I think my numbers look pretty good when compared to my paper trail genealogy. And that is really encouraging, both in germs of genetic genealogy matching paper genealogy, and paper genealogy matching the DNA report. I'm looking forward to even more detailed analysis as these tools get more and more precise and refined.
Posted by ironhide781 at 1:46 PM

Very interesting Brandt! I feel as though I was adopted as I know none of the Vadnais' I wish we coukd have found more info on Cherie & Her sister was it Yvonne ? I know Cherie and I look so much alike it is uncanny! I often wonder if they had children? My cousi refused to believe I am his half sister so that is kinda sad.. But I do enjoy learning more about our family history ! Keep up the good work!! love you !