As should be painfully obvious by now, I'm addicted to genetic genealogy and DNA tests. Having tested more than a dozen relatives, I've been amazed at all that I've learned about my family history through DNA.

When I got into genetic genealogy a few years ago, I learned there are two overriding principles that govern who to test - test the oldest generations first, and fish in every pond you can afford to. As to the first point, I soon saw the wisdom in such council - not even a year after testing my paternal grandmother, she passed away unexpectedly. Fortunately I was able to make some very signifcant discoveries in her ancestry through the DNA testing, and share them with her before she died. As my knowledge of the genetic history of my family increased, I found I needed more tests to answer questions that came up. I now have a pretty large pool of tests to work with. Some of them will need to be upgraded in the future (I only have one mt-DNA test at the full sequence level), and some additional tests will need to be ordered, but all the DNA I need from older generations is stored at the labs, and the additional tests and upgrades can be ordered as time and finances allow.

For the second point, I've done a pretty good job of that too. I tested my wife at Ancestry.com, most of my paternal and maternal family at 23andMe (back before the "new experience"), and more paternal and maternal family at FTDNA (as well as having the 23andMe and Ancestry results transferred over). And of course, everything has been uploaded to Gedmatch for maximum matching opportunities. So I feel pretty confident about the fishing in multiple ponds, except for one - Ancestry.

So far, my wife's test is the only one I have at Ancestry. And while many people who test at Ancestry take their data to FTDNA and Gedmatch, many more do not. I could be wrong, but Ancestry seems to be the "test here if you want us to do the work for you" lab. They still don't have a chromosome browser, even though the genetic genealogy community has been demanding one for years. They have the least in terms of tools to work with on their site, though the matching DNA to user's trees feature is pretty awesome. But overall, they seem more geared to helping people make fast and easy discoveries, even though they may not be 100% accurate (as Roberta Estes can tell you). But even with all those issues, I still want to get my lure in the Ancestry waters and find those cousins who for whatever have tested there and only there and won't spread their data elsewhere. 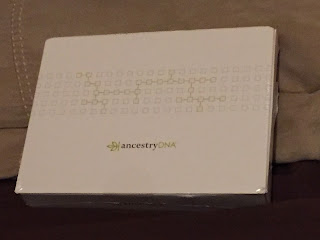 Then Black Friday came along, and with it, a whopping 30% discount on AncestryDNA's autosomal DNA test. That was a deal I couldn't refuse. Especially because this test was for the one person in all my testing that I haven't tested yet - me!
﻿
﻿ 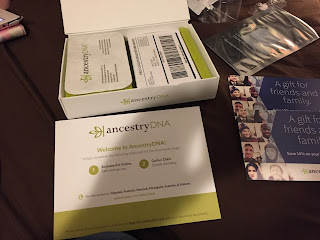 I bought the test Friday or Saturday night. Imagine my surprise, though, when the test came in the mail Wednesday afternoon! I wasn't expecting it for several more days. Score! ﻿ 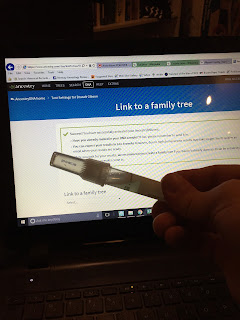 I pulled it out of the box, activated it online, coughed up the spit, and sealed it in the envelope, all in less than a half hour. They really do make it easy for you. ﻿ 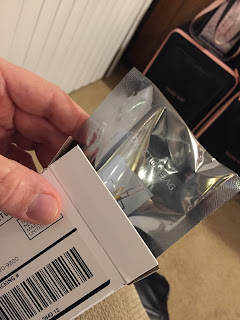 I put it in the mail Wednesday night, so now all I have to do is wait. I really hate waiting, but in this case, I am so totally swamped with stuff to do, I probably won't even notice the time go by. Ancestry said it normally takes 6-8 weeks for results to come back, so I won't be getting any results for Christmas unless they REALLY overdeliver. But things will hopefully slow down again for me by the middle-end of January, when the results are due back, so I can be patient. Probably. Maybe.

This is really exciting for me. Everyone else I've tested knowing that they share DNA with me or my wife and kids. This time I will actually get to see what MY DNA looks like - how much I actually have from each of my parents and grandparents and cousins. It's taken something I've grown to appreciate on a macro level, and delivering a whole new experience on the micro level. I can't wait to see what I look like! Genetically I mean. I do have a mirror at home.

I'm still working with my previous tests as much as time allows. But with genealogy projects popping out of the woodwork (which I LOVE), and all the Christmastime busy-ness, plus my upcoming role in my SAR chapter (I was elected Secretary at the last meeting), it's gonna be a whirlwind of a year in 2017. And I couldn't be happier.
Posted by ironhide781 at 6:00 AM

ummmm, maybe we should have a talk. Haha, just kidding. What do you expect to find that you didn't find in your dad and me? I never thought of testing you - kinda weird since you were the cornerstone of all of this family history.

I know Blossom loved hearing about all that you learned about her family. She loved sitting down with you and discussing it - Mom not so much after your little bombshell.

I like it when I don't hear about pathological liars and murderers as my ancestors. You always make it interesting, tho.

Thank you for all of your work. It isn't unappreciated!!

Mostly I'm interested to see what my DNA looks like after seeing over a dozen relatives' results, and to find matches at Ancestry since I haven't tested any of my blood relatives there.

You know what they say, you can't pick your family. And ours has certainly made it interesting!