The Harris and Berry families are unique among all my family lines in that they are the primary reason I go into genealogy. Way back in 1998, while serving a mission in Japan for my church, I got a letter from my grandma Sally about some family history she had found. I don't know when she got started, but she'd put together a pedigree chart of her ancestors, and included pictures I had never seen. Seeing those old pictures struck something in me, and I had to know more. I had to wait until after I got home the following year, but when I did, I immediately dove headfirst into family history research, and have loved every minute of it since. So when I get a chance to find something new on the Harris or Berry families in my tree, I usually jump on it.

While doing research for a client recently, I traced part of their family tree back from Texas into Kentucky. While looking for records of the family in Kentucky, I came across a record set of Kentucky marriages that included images of the original records. As my Harris and Berry lines came from Woodford County, Kentucky, I wondered if I might be able to get actual images of some of their marriages. Up until now, all I've seen are indexes and extracts, which are not the same. So when I took a break from the work, I went back to the database and went looking for the marriage of my 4th-great-grandparents, Lewis Harris and Lucinda Berry. I found two hits for their marriage. I wondered why there would be two, thinking maybe there was some kind of second return, or a duplicate record or something. So I pulled up the first one, hoping to get some new information from these records.

The first record was basically just an index - date of the marriage, names of the contracting parties, and the name of the officiating minister. Not exactly what I was hoping for, but it is cool to know the name of the person who married my ancestors. So I saved it and went back to the second record. 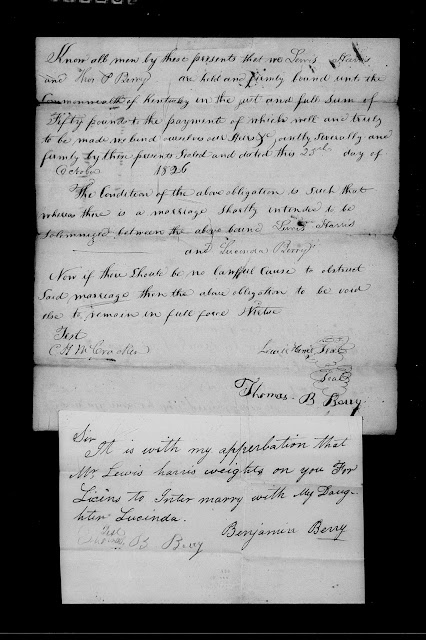 The second record was much more interesting! It was a marriage bond for Thomas B. Berry (probably Lucinda's older brother) and Lewis Harris. Thomas and Lewis put themselves on the hook to pay 50 pounds if the intended marriage of Lewis Harris and Lucinda Berry did not take place. If the marriage did go through as intended, the obligation was made void and neither party would have to pay anything. I was fascinated that even though the marriage occurred in 1826, a full 50 years after the Revolutionary War began, they were still using pounds for money. I wonder when the US finally, officially dropped the pound as an acceptable currency. Might need to go look that up.

The other part of the record that interested me was the note included at the bottom. It was apparently written (or at least dictated and approved) by Lucinda's father Benjamin Berry. I love the way the note sounds when read aloud, as it makes me think this is the accent they may have used. The note was apparently written to the minister or government officer responsible for issuing the marriage license, and reads as follows (spelling as written in the original):

Sir,
It is with my apperbation that Mr. Lewis harris weights on you For Licins to Inter marry with My Daughter Lucinda.
Benjamin Berry

I love seeing those little individual quirks in how my ancestors and their associates wrote. Things like "apperbation", "weights" for waits, and "Licins" make me wonder if this is how they sounded when they spoke.

I went back to my file and saw that Benjamin was born about 1755, so he would've been about 71 years old when writing this. 71, with an 18-year-old daughter! She wasn't his youngest either - she had three younger sisters and a younger brother as well. These were all children of Benjamin's second wife, Nancy Blanton, who was about 25 years Benjamin's junior. The handwriting on the note is really clear and smooth so either Benjamin had a very steady hand at 70, or someone wrote it for him. I'm inclined to think he wrote it himself, as Thomas' signature is on the note as well with the note Test, which I take to mean Testator or witness. But for Benjamin the signature is in the same hand as the rest of the note, with no note for "his mark" or the word 'seal' with a squiggly cloud drawn around it, or anything else to indicate that it's a copy of an original note. So this is probably his own signature and handwriting. Wow! His handwriting at 71 is better than mine has ever been. 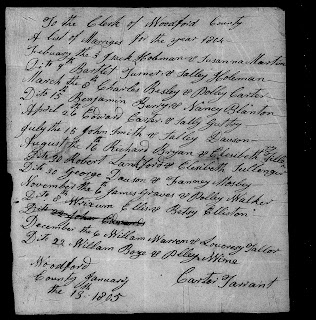 Then, just for funsies, I went looking for the marriage record of Benjamin and Nancy, just to see if they had it. They did! This was made a while after the fact, as it looks like it's a summary of marriages performed in Woodford County either by a man named Carter Tarrant, or for a church or court Carter was affiliated with. The marriages are all out of order chronologically, so it might even be a summary of several churches or courts or something. But the amazing thing is this record is over 210 years old, and has information about my family! Simply amazing how much information is available to researchers these days, and how easy it is to find sometimes. ﻿
Posted by ironhide781 at 6:00 AM

Hi.... I am a Harris-Berry descendant as well. Via Thomas Harris and his wife Lizette Ranier. Thanks for the fantastic effort digging these docs up. Wonderful!

Absolutely! Happy to meet another cousin!