A couple months ago, I was digging through some online newspapers at Newspapers.com, and came across a few articles about my 3rd-great-grandfather, Philip Wilhelm Hammer. A couple of them mentioned his watch and jewelry shop, which I found fascinating - not many of my direct ancestors were entrepreneurs. Many were farmers, or worked in the mines, or for retail establishments or canneries or other occupations. But the idea of this one ancestor being a watchmaker and jewelry salesman has always stood out in my mind. But I digress - back to the articles.

What caught my eye that day was the content of two articles from late 1880, when Philip and his family were living in Minneapolis, Minnesota. These articles made it plain that Philip had gotten himself into some trouble.

The first article laid out the charges - he was accused of "designedly, by false pretenses and with intent to defraud, obtaining the goods of another." That's a pretty serious accusation, though it didn't tell me who was defrauded, for how much, or any other information about the crime. The second article wasn't super informative either, but at least gave me some details about the outcome.

Despite pleading not guilty, the jury convicted him, and turned him over to the "leniency of the court." I'm still not sure what that means, as it sounds like it could be either saying "yes he's guilty but go easy on him," or "he's guilty as sin, throw him to the dogs." Either way, he did not get out of what he was accused of.

These articles let me wondering - were there court records made of this case? It was a district court, so it seemed likely there would be. That led to the next question - could I get a copy of them? I asked around some genealogy groups on Facebook, and one recommended I try the Minnesota Historical Society, as they were known to have some court records. A cousin of mine, also descended from Philip, chipped in and we sent off a research request for the records. After a few emails back and forth explaining what exactly I was looking for, I was told they didn't have the records for the time frame I needed, but that they knew who did and they were refunding my fee Wow!!

So I contacted the Hennepin County court house and after once again explaining what I was after, I was told they did indeed have the records I was looking for! I was told they were in poor condition and hard to read, but I could still have them if I wanted. I asked if there was a way to see a sample page, and the lady scanned and emailed one to me. The handwriting was a bit difficult, but the image was clear. I figured if all the pages were like this, I'd be fine. I paid the fee and submitted my request and waited. For those of you who know me, you know I hate waiting. But this time I was plenty busy with a rush research project for a client, so before I knew it, the records arrived!

I was originally told there were 9 pages, but it turns out there were 14. A couple of the pages turned out to be rewrites of each other, but there was quite a bit of interesting detail in there. Here's what I gather happened:

On Saturday, November 6, 1880 Philip Hammer and another, unnamed person (one witness says it was his brother, but I have no record of any of his siblings ever living near him) approached a guy named John Mayer and offered him a satchel (or sachel as they keep spelling it in the court records) of jewelry. There was quite an assortment of items - 30 pairs of gold-plated earrings, 12 silver-plated sugar spoons, 6 4-bladed Jack knives, 24 gold-plated cuff links, and 3 gold collar buttons. They dickered about the price, and settled on $15 for the whole set (about $300 in today's terms). Philip and his buddy went outside for a minute, supposedly to talk it over, but went into a saloon across the street and removed most of the goods from the satchel, and then returned to John and accepted the offered price. John paid them and they left and went back to the saloon. John gave the satchel to his wife Mary, who dumped it out on her bed to check out the goods, and saw what had happened. She went over to the saloon and publicly accused Philip of fraud, which he denied. So John took the matter to court, swore out an affidavit against Philip (whose name he didn't know) and Philip was arrested the following Monday. 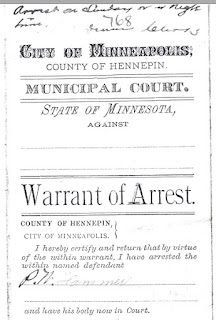 The testimonies in the court records are pretty clear. The saloon owner saw Philip take the goods out of the satchel, John and Mary's testimonies were consistent, Other people testified that they saw Mary accuse Philip. Interestingly, there is no testimony from Philip himself in the file. I wonder if it's because he plead not guilty, so they just compiled evidence against him?

One other thing caught my attention. At the top of the arrest warrant, it says "Arrest on Sunday or at Night time." Why would it say that? What would be the benefit of arresting him on Sunday or at night vs during the day on a weekday or Saturday? Was it that they didn't want to cause a public scene? Very intriguing.

The records also state that he signed a bond that stated he would have to pay $200 if he didn't appear in court when appointed. Given the articles mentioned above, it looks like he stuck to it and appeared in court when he was supposed to.

The whole episode is a mystery to me for several reasons. Why did he do it? Did he think he could get away with it? Who was the co-conspirator, and why wasn't he charged? Or was he? Maybe I can find some more answers back in the newspapers, even though an index search didn't turn up anything further. So many questions, some probably unanswerable.

Given another major event of apparent dishonesty in Philip's family life (which I hope to blog about soon) I'm left to wonder if he was fundamentally honest or not. I try not to judge my ancestors too harshly, as I don't and can't have their life stories, just a few moments of time here and there captured in a few documents. But when two of the major events they are involved in both occurred because of that ancestor's dishonesty, it makes me wonder what drove him to do such things. Then again, I've made some poor choices, and if by chance the only record of my life were accounts of two of those poor choices, future generations would probably get the wrong impression about me (at least I hope it'd be wrong). So I think I'll give old Philip the benefit of the doubt here, and hope that the rest of his days were filled with better choices.
Posted by ironhide781 at 6:00 AM